A Basis For Hope

This long holiday season was a particularly hopeful time for many investors.  The S&P 500 finished December up 1.82%, and now through the first week of trading in 2017, it’s gained another 1.72% (Total +3.54% since Dec. 1)i.  It seems that the good times have followed us into the first week of the New Year.

It's usually around this time in a market cycle that I get the question, "Why don't we sell now, take our profits, hold cash, and buy back in when it’s cheap?"  This isn’t a bad way of thinking, yet it’s much easier said than done. Never mind the associated tax consequences.  Let’s focus on the execution side of this strategy. 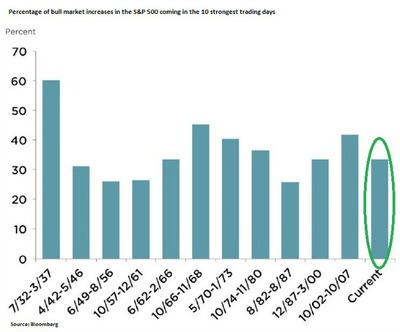 As you can see from the graph on the right, market rallies tend to move in brief bursts, and if you miss out, you tend to lose all advantages of equity investingii.  Despite recent market activity in the wake of the election, this market rally appears to be no different, and a reminder that bull market increases tend to be concentratedii.  In fact, since the bottom of the last business cycle in 2009, more than 500 of the 1,595 point increase the S&P 500 has seen, has come during just 10 trading sessionsii.  However shocking this may sound, this is actually par for the courseii. The 10 strongest trading days in a bull market have historically accounted for an average of 36% of the gain across the cycle as a wholeii.  The top 25 days have accounted for 73% of the increasesii.  Often just missing a handful of key days in any uptrend can significantly hamper returnsii; another argument in favor of investors having “Time-in-the-market” rather than, “Time ‘ING’-the-market.” 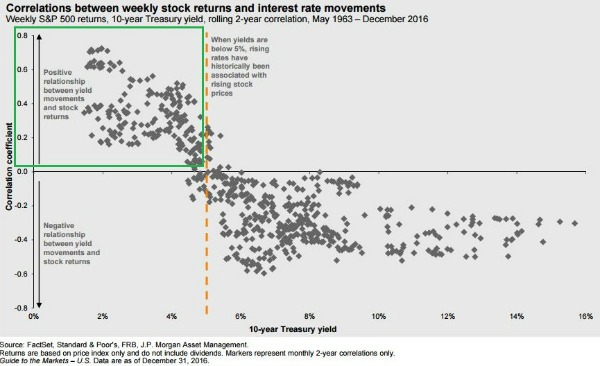 Regardless of your preference for avoiding the pitfalls and attempting this classic "investors trap" called market timing, we see several signs as a basis for hope.

Increasing interest rates (as we have predicted in our 2017 Look Ahead) are not necessarily a whopping blow to an economy.  In fact, the correlated scatter plot to the right shows that when yields are below 5%, rising rates have historically been associated with rising stock pricesiii. 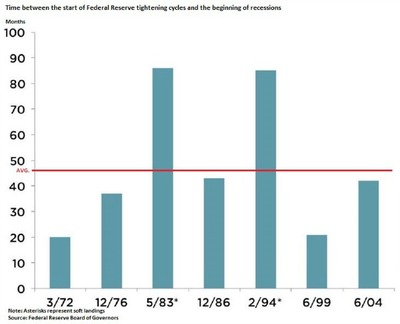 Furthermore, we don't expect another corporate earnings recession until late 2017, if at all.

While ‘this time may not be different,’ there is plenty of foundation for hope.  A recent survey by CFO (Chief Financial Officer) Magazine suggests that the good times may continue.  CFO optimism is at its highest level in over 10 yearsv. 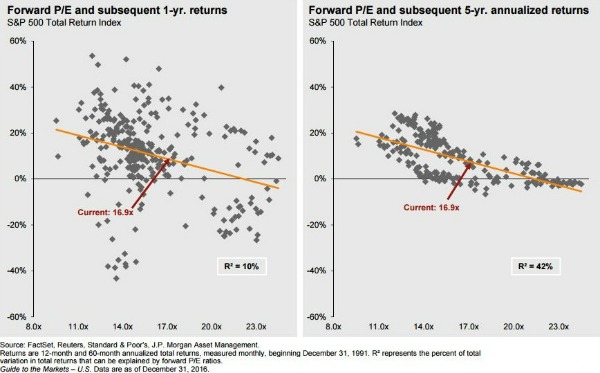 Certainly, market return expectations should be tempered in 2017 simply based on the fact that U.S. asset values are trading at higher levels while returns tend to be muted based upon current PE’s (Price-to-Earnings Ratio)iii. In fact, based on where our current PE sits, returns in the 2% - 6% range for the S&P 500 would not be so dour.

While not an investment strategy, hope is a great mindset that has led to long-term progress.  In spite of all the noise around politics, ISIS, and interest rates, 2017 looks to be a reasonably hopeful year.

If you have questions or comments, please let us know as we always appreciate your feedback. You can get in touch with us via Twitter, Facebook, or you can email me directly.  For additional information on this, please visit our website.