The start of the year has me preparing for meetings with endowment and foundation committees as well as strategic planning meetings for our firm. In general, I take a macro view on key themes that could impact investment outcomes and build those into my meeting preparations and strategic plans. Last week, I shared my wild guess as to the outcome for the S&P 500 by year end 2012.

The base case for economic forecasting is as follows (provided by Bloomberg):

Using that as my starting point, here are my key themes for this year’s base case:

As you can see, the consensus estimates are a bit muted. My guess is there’s a 25% chance of an upside surprise driven by two main factors, foreclosures and consumer spending. First, foreclosures should begin to help clear the system and housing prices could stabilize this year. Secondly, the consumer could feel confident enough to spend down savings a bit more despite the lackluster wage growth.

You can hardly mention consumer confidence without commenting on the state of politics in America. Contrary to popular opinion, I don't see public policy playing as large a role in 2012 as it did in 2011. In my opinion, there are only two big events that will play out this year in public policy:

The payroll tax is likely going to get extended without much of a fight as Republicans basically conceded that ground in December. The President will also make a public affairs debate over two key provisions in ObamaCare that are wildly popular: child health care and health care for people with pre-existing conditions.

Any other major debates will probably wait until after the election. The President wants to paint Congress (read Republicans) as a “do nothing congress” so it may be in his best interest to propose nothing. On the other hand, many in Congress want to paint the President as ineffective at getting things done, so it may be in their interest to propose nothing as well. We'll have to see who wins this stalemate in the coming November. As for markets, a year without big policy considerations might be helpful.

European Union countries may likely slip into a recession if they are not in one already. This on its own is already baked into the base case scenario and would certainly be a drag on Global GDP growth as the European Union is the largest economy in the world. Underweighting Europe has always been our mantra for years. However, there could be a low probability of an upside surprise if the recession is mild and the EU finds more ways to stabilize their currency and banks. Although, if a series of defaults occur outside of Greece, we could see a large drop in global equity markets.

While there is plenty of opportunity in emerging markets this coming year, one significant drag on that possibility is Europe. What most people don't realize is that the EU banks have been very large lenders to emerging market countries.

Since EU banks don't seem to want to issue new stock at cheap prices, they will most likely pull back on lending both at home and abroad. This is potentially bad as the EU banks are large players in both US and emerging market lending. I'm cautiously optimistic the emerging markets will provide positive returns this year.

While my base case calls for the S&P 500 to close at $1,339, I do see a few areas of potential upside. One may be to continue concentrating on high dividend paying stocks, although this is hardly a fresh perspective. I continue to focus on high yield and distressed corporate bonds for those that can appreciate the risks. Additionally, I favor mid-cap stocks over small cap stocks this year. Large corporations have record levels of free cash flow and net income that I believe could be used to acquire smaller companies in the mid-cap sector. 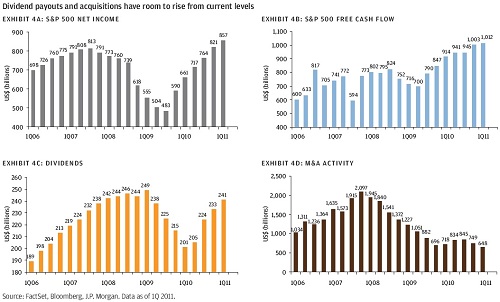 To summarize, many global risks have been built into the base case outlook and there certainly could be some great upside surprises this coming year making the base case look very conservative. On the downside, a European Union breakup and defaults would crush Europe, damage Emerging Markets and have a strong negative impact on our markets. No portfolio would be exempt from this shock, but I consider this scenario highly unlikely.