With all the recent turmoil around citizens of the U.K. voting to leave the European Union, it's easy to get caught up in the emotions of the event and forget about the original ‘Brexit’. As yesterday was our nation’s birthday, let's not forget that over 240 years ago, we as British Subjects chose to leave the British Empire in hopes of a better life. In spite of what our adversaries think about us..."Mission Accomplished."

This November we will make another choice: Our President. That means it's time to drag out the analysis on Presidential Elections, review the performance of our economy, and analyze how the stock markets have fared under both the Democrats and the Republicans. This year I am leaning on a recent seminal study by the noted Princeton University Professor Alan Blinder. (Here is a link to the study).

It's an irrefutable fact that the economy fares better under Democrats, according to the study. [i] 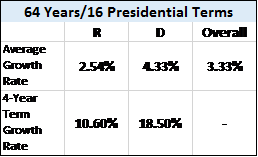 Referencing the table above, we can see that the GDP grew at an average rate of 4.33% when a Democrat was President vs 2.54% when a Republican lived in the White House. Compare that to an average of 3.33% during the past 64 years. To paraphrase the study, over a 4-year Presidency term, the U.S. economy grew at a resounding 18.5% with a Democrat President but only 10.6% when a Republican was in the White House. [ii]

Undoubtedly, this poses a lot of questions about each Presidency: 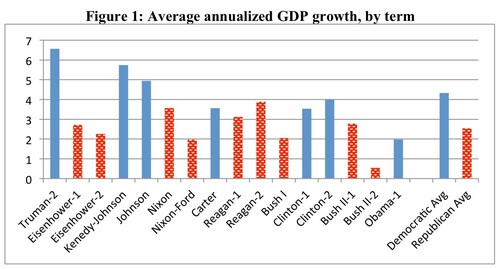 Certainly, all these questions and corresponding answers have an impact on each Presidential term. The study does an excellent job ferreting out the answers. To avoid a 10-page blog, the simple answer is that all these variables actually have little impact on explaining the large gap in GDP between Democrats and Republicans.

The one variable that lingered in my mind was that Democratic Presidents must be inheriting a better economy than the Republican Presidents, causing such a large gap in GDP performance.

However, the facts in the study suggest otherwise. 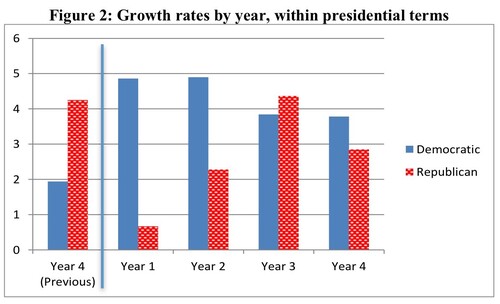 Generally, Democratic Presidents inherent an economy growing at around 1.94% while Republicans inherit an economy growing at a whopping 4.25%. Yet Democratic Presidents get quicker turnarounds and Republicans tend to experience an immediate and sharp reduction in GDP growth during Year 1, only to regain footing in Year 3. [iii]

So what's the answer to the 1.79% GDP out-performance gap? According to the study, "Democratic presidents have experienced, on average, better oil shocks than Republicans (some of which may have been induced by foreign policy), faster growth of defense spending (if the Korean War is included), and a better record of productivity shocks (which may relate to many different policies). More tenuously, ... Democratic presidents may have also benefited from stronger growth abroad."

"These factors together explain up to 56 percent of the D-R growth gap in the full sample and as much as 69 percent over shorter (post-1963) samples. The rest remains a mystery for now."

So we can surmise that 56% of the gap is explainable, while the rest of the gap remains a mystery. Hmm...

In any case, the outcomes for investors is not too surprising. [iv] 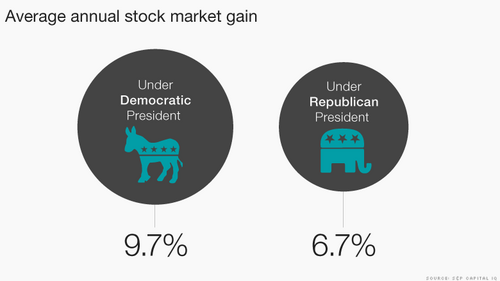 Comparatively, when Democrats occupy the White House, the stock market gets a 300 bps bump in returns, compared to when Republican Presidents are in office. Here is a breakdown so you can see for yourself. [v] 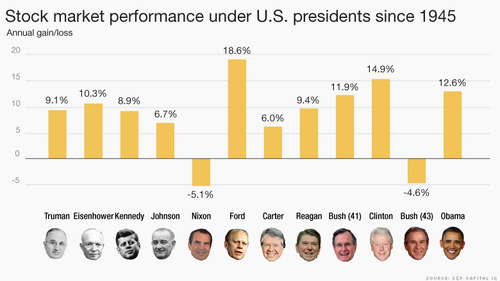 Additionally, it seems that regardless of which party represents the Presidency, by the fourth year of the second term, the U.S. Stock Market tends to fare poorly. [vi] 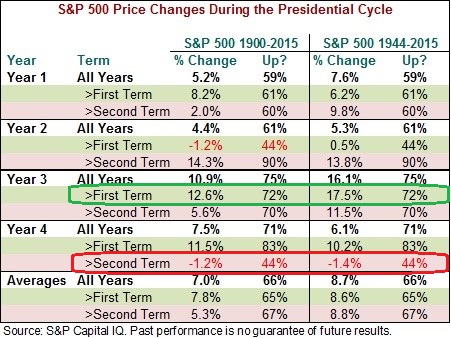 Yet, none of this filters in the simple fact that the stock market has seen zero returns during the last 18 months.

Our next President will face a unique set of challenges:

Not since President Roosevelt have we faced such a challenging period. [vii]

The good news is if you weren't plucked clean during the Great Depression, you experienced historic equity growth.

If this study is any guide to picking a President, we can surmise we need one that would be:

This is all possible if we choose as wisely as we did 240 years ago.

Political Disclosure: I write this post based upon known studies and do not write this as a political partisan. Frankly, I found much of this data and the study itself surprising.