Back to Work: The Fed Might Fight Higher Wages

The strength of the latest jobs report continues the trend in the U.S. labor force.  In April 2017, the U.S. economy added 211,000 more jobs.  Hospitality/leisure, professional and business services along with healthcare showed solid growth. [i]

The unemployment rate fell to 4.4 percent, matching the low in 2006 just prior to the Global Financial Crisis.

The unemployment rate did fall to its lowest level in over a decade; despite popular belief, the reason has little to do with the addition of jobs and much to do with the fact that fewer people are participating in the workforce. [ii]

Based on wage growth, the economy appears to have reached the level of full employment.  Total compensation was up 0.8 percent last month and 2.6 percent on a year-over-year basis. [iii] 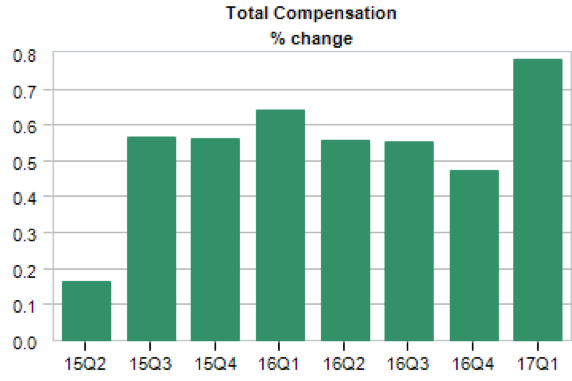 The addition of jobs, lower unemployment rate, and near-achievement of the full employment rate suggests that we have likely reached a point at which the Federal Reserve will need to continue to raise interest rates to head off significant increases in wage inflation.  As odd as this might seem, after so many years of lackluster economic growth, the Fed might need to slow wage growth down in the coming quarters.  To do so may mean higher interest rates in June 2017 and likely in September later this year.

Additional support for rising wages and, ultimately, higher interest rates is the strength of corporate earnings.  Earnings continue to pour in strong from Q1 2017.  Furthermore, they are expected to continue to be strong in the coming quarters, despite the anemic decline from Q4 2016 to Q1 2017. [iv] 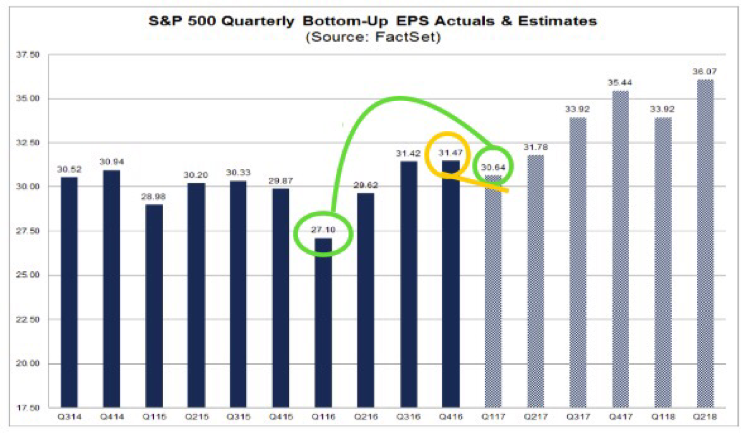 All signs point to higher wages, higher interest rates, and perhaps a natural slowdown driven by the Fed’s attempt to fight wage inflation in the coming twelve months.

If you have questions or comments, please let us know.  We always appreciate your feedback.  You can get in touch with us via Twitter and Facebook, or you can e-mail me directly.  For additional information, please visit our website.