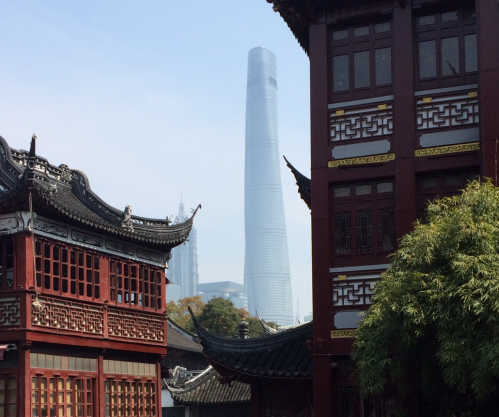 On my recent visit to China, my goal was to learn much more about an economy we are invested in. It's impossible to summarize China in any one post. It's a country that is complex and so different than the United States, not just culturally but economically.

I'm going to give it my best shot and summarize my findings.

First, China followed a similar path that most emerging economies followed as they migrated to developed economies. This would include Germany, France, and in some ways the United States and England.

According to the famed economist on emerging markets, Alexander Gerschenkron, a successful emerging economy needs to exhibit some basic qualities:[i]

1) The country needs a strong State sponsor to prioritize capital allocations (building projects that can improve infrastructure) which have a significant impact on growth. Think converting a single dirt path for walking into a wide dirt road for horse and cart.

3) The State needs to encourage/force the very poor agrarian workers to leave their sustenance jobs and work on the projects, shifting from an agrarian economy to an industrial economy. This in turn increases wages, which the State should incentivize the earners to save. The more coercive and comprehensive the measures required to reduce domestic consumption and allow national saving, the better.

4) State sponsored banks need to lend that savings for more capital improvements, which drives even more growth. For example, the State would support manufacturing that builds the tractors that make the dirt roads, as well as finance the mines, sand and gravel companies, or lumber mills.

6) The country needs to exhibit a few entrepreneurial standouts that want to take over the State's role in organizing capital and labor.

China has followed this playbook almost perfectly. It has emerged from an agrarian economy to become an industrial economy. According to Alexander Gerschenkron, China has overcome its backwardness.

The result is an economy that looks like this:[ii] 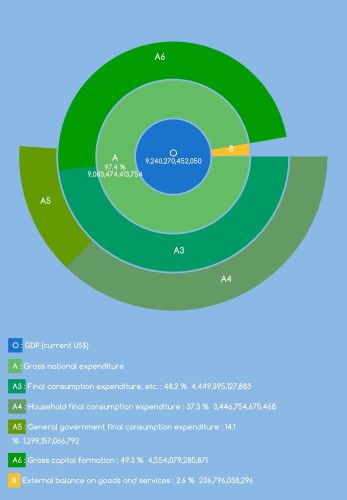 Compare that to how the US economy looks and you can see China's challenge as they move forward.[iii] 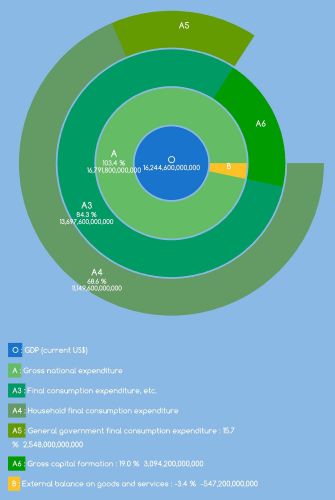 About 70% of the US economy comes from household final consumption and 19% from capital formation (planned investments like roads, bridges, factories, equipment houses).[iii]

About 37% of China’s economy is from household final consumption and 49% capital formation. This is a byproduct of working out of backwardness and a focus on capital improvements versus consumer demand.[ii]

Based upon my recent visit, I am convinced China is abundantly aware of its need to make a conversion to a less capital intensive economy. After all, how many cities can you build that look like Shanghai (photo taken from my hotel room)?[iv] 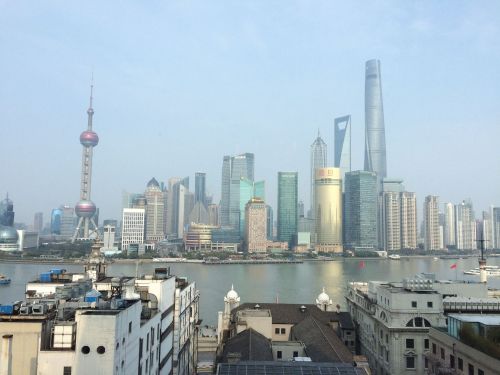 In fact as long ago as 2007, China's then Premier Wen Jiabao said the PRC economy was increasingly, “unbalanced, unstable, uncoordinated, and unsustainable.”[v] This conversion won't be easy, but unlike many economists, I think China has the right ingredients to succeed.

First, China’s citizens have one of the highest savings rate in the world.[vi] 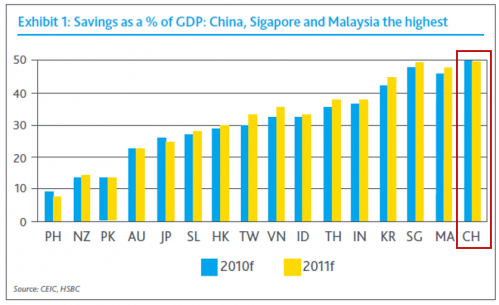 There are many reasons for this, and I can write an entire separate post on this topic, let's simply consider this part of the emergence from backwardness. Needless to say, the Chinese government is working on ways to have its citizens spend down their savings. It’s considering ideas like more predictable state-sponsored health care, pension reform, and liberalized investment choices.

Second, China still has a massive agrarian economy it can continue to migrate to a more consumer-focused economy. Take a look at some data on this sector.[vii]

Third, Chinese citizens are just now growing accustomed to using credit to fuel their consumption. While they still pay down their balances, those balances are growing.[viii,ix]

Fourth, the Chinese government runs the world’s largest investment fund (CIC) based upon its massive trade imbalance (exports far exceeding imports) that sits at over $600 billion in assets.[x] It can use this fund to fuel a domestic growth agenda, such as buying stock in service and technology oriented companies. In fact, it recently purchased a minority stake in Alibaba, the Amazon of China.[xi]

While these ideas are going help the success of China in its conversion, the process is going to cost the Chinese some of their growth.

You can already see the slowdown in GDP, much of this driven by a slowing in capital expenditures.[xii]

At what level will the Chinese need to consume to sustain the current level of GDP while the economy grows less dependent on cap ex?

If we look at a 7-year period, we can see the Chinese will need to increase household consumption by 13.4% per year and hold capital expenditures steady to achieve a 7% GDP growth rate. At that point, consumption as a percentage of GDP will look more similar to the United States.[xiii] 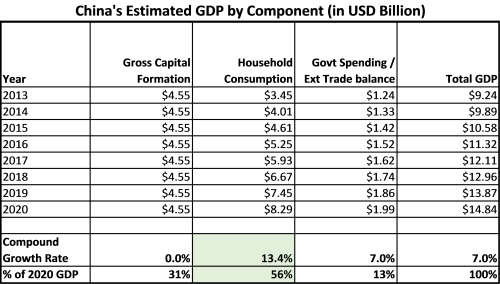 China will need a consumer expenditure growth rate more like the 11% rate in 2011.[xiv]

Emerging from backwardness was hard, now converting to a US-style economy requires a deft touch that only a command-and-control governance structure like China’s can pull off. That's why we maintain some exposure to China.

As an insurance policy of sorts, exports are poised to grow again with the strong dollar. This could be a surprise to the upside.

I am fully aware that China is froth with risks:

[xiii] Projections based on China’s 2013 GDP component data from Mecometer.com, and assume no increase in capital expenditures and 7% annual growth in other non-household consumption components (government spending / trade balance).