Finally, there’s some good news from the consumer. Retail sales were up 1.2% from last month with gains in almost all sectors.[i] 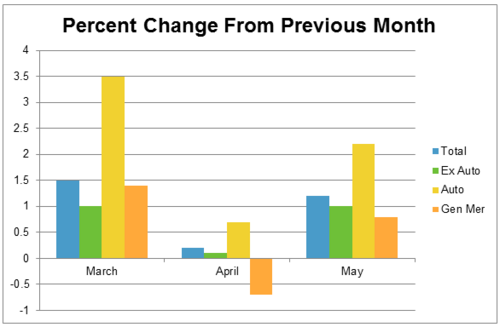 On a year over year basis retail sales are up 2.7% and if you exclude auto and gasoline they are up 4.3%. Perhaps we are finally seeing the consumer part ways with their gasoline savings they have accrued over the last year.[ii]

Simultaneous to an improving consumption picture we are getting pretty negative readings from individual investors.[iii] The American Association of Individual Investors, or AAII (an organization that measures individual investor sentiment), has just posted its worst reading since March 2009.

AAII takes a survey of their individual investor members and measures their sentiment. As you can see from the graph below they are the least bullish they have been since March 5th, 2009. On that date in 2009, GM said their survival was in "substantial doubt" as noted in their annual report.[iv] The UK also announced the beginning of their quantitative easing.[v] Note the 3 month moving average (green line). 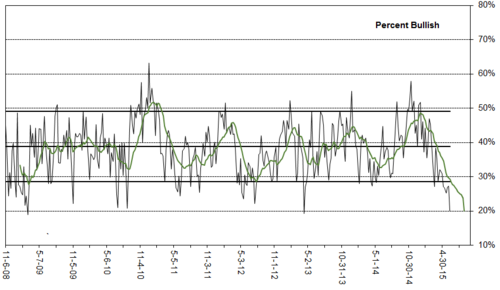 Coincidentally, that happens to be almost the exact start of one of the greatest bull markets in the history of the world.

The oddity is individual investors and consumers are one in the same. So do we believe the retail sales data or do we take caution from their very pessimistic investment sentiment?

It appears even the professionals at the AAII suggest their data is very predictive and contrarian. In cases where the bullish readings were one standard deviation below their mean of 38.8% the markets rallied on average 6.9% in 6 months 80% of the time.[vi]

Astonishingly, when members were 2 standard deviations below mean, the markets rallied an average 14%, 100% of the time. Note we are very close to 2 SD below the mean.

Could this be another period of time when the individual investor is wildly wrong?

With earnings expected to shrink by -4.6% in Q2, according to Fact Set, it's hard to imagine markets rallying.[vii] It's also hard to imagine how pessimistic GM was on March 5th 2009 and look at them today. They are selling over 9 million cars and trucks each year, earning an adjusted EBIT of $6.49 billion in FY2014.[viii][ix]

In the long run, it's just not smart to bet against America, even if American's go negative.