It’s the start of earnings season, so let's take an early look at the numbers. With 56 of the S&P 500 companies reporting so far, earnings are coming in better than expected with 43 companies (77%) beating estimates.[i] 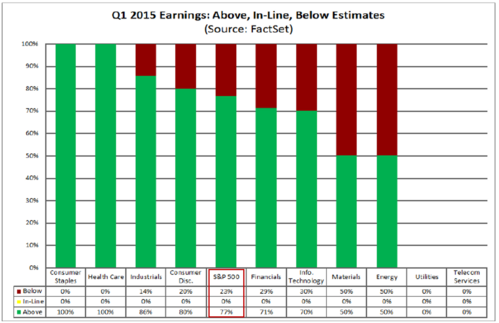 Some bad news in the numbers appears on two fronts. First, while earnings are beating, they are beating on a declining number.[ii] 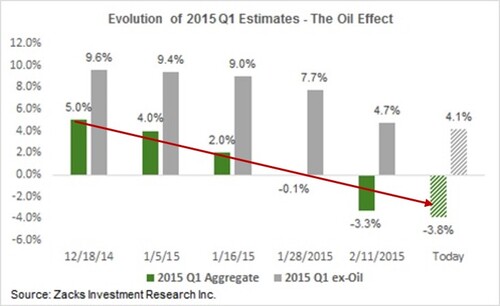 Second, the all-important revenue number is not exceeding estimates. In fact, it is missing significantly overall. 54% of companies have reported revenues below estimates and the blended revenue decline for Q1 is forecasted at -3.0%.[i,iii] If this number holds, it will be the first year-over-year sales decrease since Q1 2013 and the largest year-over-year decline in revenue since Q3 2009.[iv] The big drag is coming from energy with a whopping 64% drop in earnings and 39% decline in revenues, much of this was already anticipated by Wall Street.[v]

The outcome is a slight expansion in PE on the S&P 500 from 17.86 on April 1st to 18.24 today.[vi] You are seeing markets starting to adjust and discount this data, especially with the significant pull back on Friday. Further, we are seeing large increases in volatility. The S&P 500 has had daily moves of 1% or more 27% of the time this year compared to 15% of the days in 2014.[vii]

With increased volatility and earnings growth in negative territory, the expectation for an interest rate increase has been pushed out until later this year versus June.[viii]

Like most things that are market driven, the US economy will adjust and create an equilibrium level at which to operate. That adjustment might come in the form of a weakening dollar as our economy cools off a bit, and especially if the Fed delays raising rates while other countries are cutting theirs. The dollar has declined in prior periods when Fed Fund rates were stable or declining.[ix] 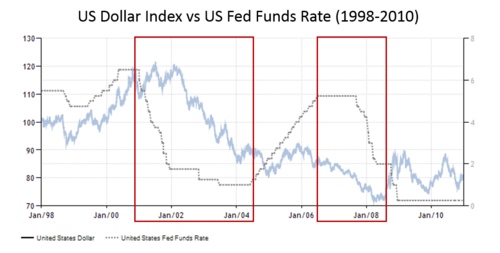 With a weakening dollar, the heavy reliance of foreign sales by the S&P 500 (46% of revenues) should help create a recovery.[x] The question is when. If you look at the time from when the dollar rose to when we started to see its negative impact on companies, we saw a lag of about 2-4 months.[xi] 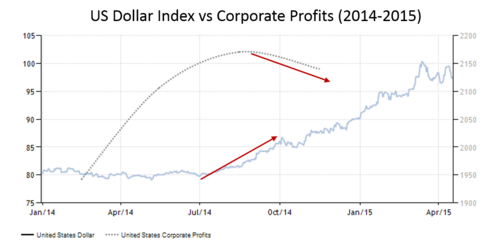 For example, take Johnson & Johnson (JNJ). The dollar started rising in July 2014. At JNJ’s Q3 earnings call in October 2014, the negative impact from currency on Q3 sales was 0.7% and management projected a $0.15 to $0.20 per share negative impact on 2015 earnings.[xii]. By its Q4 earnings call in January 2015, currency headwinds increased substantially with Q4 sales negatively impacted by 4.5% and the impact on 2015 earnings estimated at $0.42 per share.[xiii]

We could see that type of lag effect as the dollar cools, interest rate expectations push out, and companies recover from the headwinds in their foreign sales.

In the meantime, we should prepare for more volatility and a reasonable correction. There is no predicting any specific outcome, but adjusting expectations for equity returns is always wise during cycle adjustments.