Relative to the last few decades of cooperation, it’s becoming increasingly clear that the entire world is adopting a competitive footing.

This is a timely matter seeing as we are in the middle of a national election that will select the person that will lead the world to either greater cooperation, or to increased competition.

Cooperation has been a hallmark of our economic success since WWII. While technology, efficient use of capital and labor, and globalization has created heartache for many Americans, cooperation has created a more peaceful and prosperous world after 60 million people lost their lives during WWII. [i]

The odd thing about cooperative agreements is that they are actually very fragile and mostly depend on trust to exist. If trust in one party starts to erode, it's in the best interest of the other parties to preemptively violate any agreements in order to not lose the negotiating advantage.

Needless to say, Trump is proposing we tear up trade agreements, modify or walk away from peace agreements and violate widely accepted conventions of war and peace. And he's not the first one to move on this (think Putin and Ukraine/Crimea). [ii]

A likely outcome of a Trump Presidency would be others violating our mutual agreements before we have a chance to renegotiate. After all, why wait if you can cut better deals with others and leave the U.S. out?

So what's at stake if we lose on trade? Here are the economics:

Taking a recent Peterson Institute study, you can find here [iii], Trump has proclaimed on various occasions that he would:

The impact is abundantly clear; we would have lower GDP growth without our trade agreements. Any effort to block the next President’s actions through the courts, or through Congress, would be difficult and would certainly take time. While we would eventually find an equilibrium, the effects of a trade war could be felt for years to come. 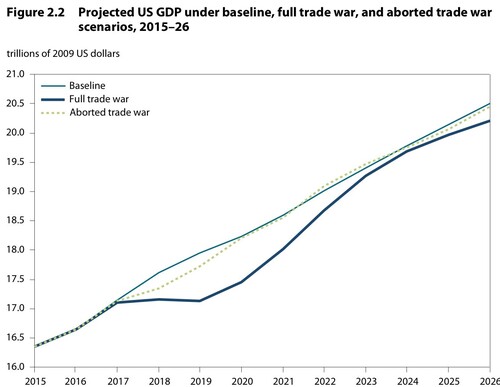 A large part of our GDP is specifically tied to trade. There is a direct correlation where U.S. GDP would flat line for a number of years if trade were to decline, according to the Peterson study. [iv]

In fact, trade represents around 30% of our GDP, with nearly $5 trillion in value. 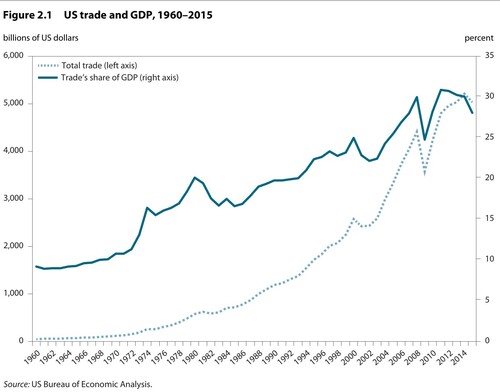 Estimates for jobs lost are also not inconsequential. According to the Peterson study, manufacturing would be hurt more by a protectionist stance than helped, retail trade would lose over 300,000 jobs. [v]

The economics are not complicated. We have a population of 322 million in the U.S. and selling to ourselves is noteworthy, however, selling to China, Mexico, Canada, India, and Europe with over 3.5 billion people combined, is a far better proposition. [vi]

Unfortunately, we are already seeing some of the first movers on trade:

Not all areas of employment will be affected equally. Capital goods producers will be the most intensely affected. However, in a full-trade-war, the largest job losses will occur in non-trade sectors, such as wholesale and retail distribution and sales, restaurants, and health care. [x] 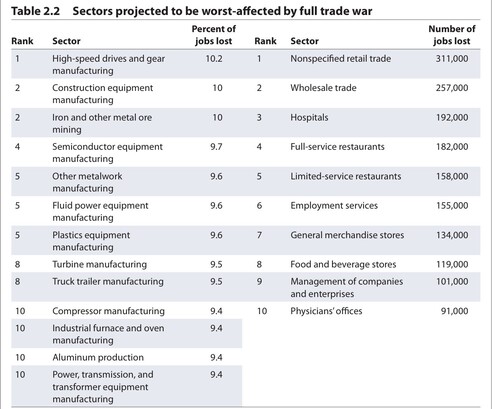 Perhaps the trade wars have already begun and we just have yet to formally recognize them. This election will determine the direction of trade, and how we frame future relationships with our trade partners. However, many want to see a more protectionist country with limits on trade which will likely limit peace, profits, and progress.