A countless number of commentaries written in the past eight years have been dedicated to the threat of disinflation/deflation. But why is disinflation/deflation so essential? The short answer is that disinflation, the slowing rate at which prices are increasing, leads to deflation. Deflation is the pricing decline in goods, which is generally positive for the average consumer.  However, this still doesn’t answer the question as to why these two aspects are so significant.

To understand the importance, you should understand inflation and its influence on the economy. Inflation is one of the single most important components to calculating expected corporate earnings growth, expected asset returns, GDP, wage growth, future interest rates, and so on.

Whereas inflation, at the right levels, works in favor of improving many economic components, deflation can be terrible for investors, especially those invested in equities. [i]

As evidenced by what’s occurred in Japan in past decades, once an economy ends up in a deflationary cycle, it’s hard to break out.  This is why the central banks will do anything and everything to both avoid remaining in disinflationary periods for too long, and to counter the risk of deflation completely.

It’s important to recognize that we’ve been in a long, slow decline to lower inflation levels for many decades now and that we have worked under this general backdrop for quite some time. [ii] 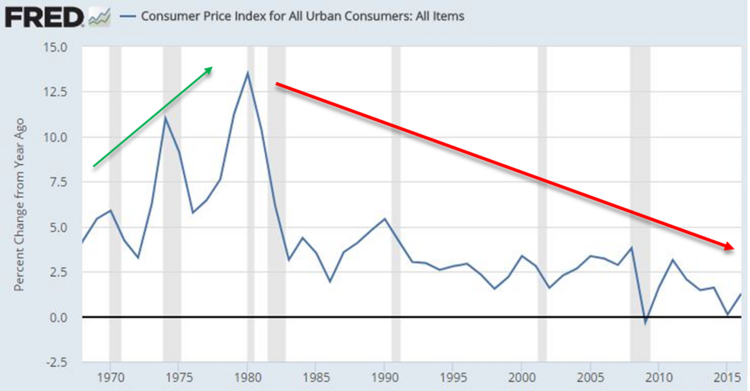 However, even more worrisome, is that we are starting to see pricing declines in several key areas of interest.

For one, we are seeing rent prices decline in cities that are notoriously known for their increasingly high rent prices. [iii] 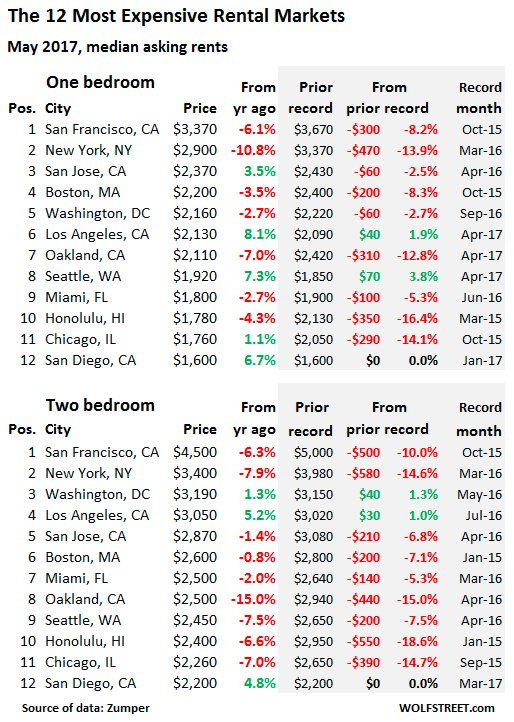 Cities like San Francisco and New York have rarely seen rent price declines in the magnitudes they’re currently experiencing on a year-over-year basis.

Secondly, we continue to see more oil and gas supply come online, leading to relentless pressure on energy prices.  Compared to May of 2016, total rigs online have grown from 404 to 916. [iv] In fact, oil prices are near $50/bbl, and the improved, cost-efficient designs for deep water projects have reduced the breakeven cost to around $40/bbl, leading to renewed momentum in deep water exploration. [iv] 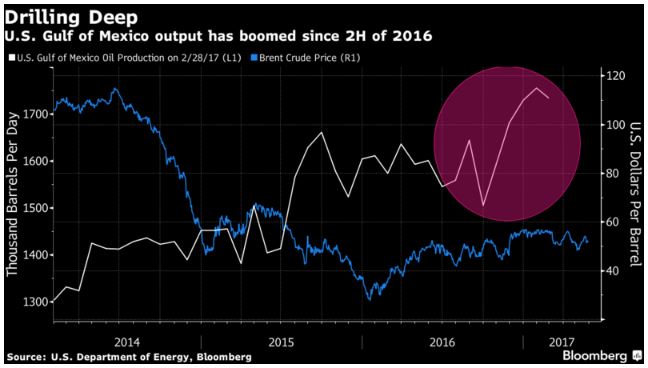 Additionally, the recent U.S. withdrawal from the Paris Climate Accord appears to project a powerful message to other oil producers, based on the common global take away, that the United States is opening the spigot and ramping up oil and natural gas production. For these very reasons, our belief is that oil prices will have a natural cap at levels that are not much higher than where we currently sit.

Although we’ve seen wages increase steadily since 2013, the long-run average of 4.2 percent is still far from where we’re at currently. [vii] In real terms, compensation measured quarter-over-quarter has actually declined. [viii] 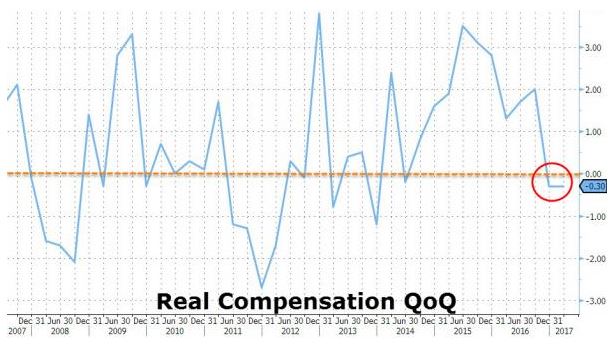 Furthermore, a large contributor to the historically low unemployment rate is the drastic decline in labor participation. The labor participation rate has decreased from nearly 67.5 percent to a feeble level of 62.7 percent. [ix]

Given these circumstances, specifically the lack of labor participation, it may be a while before we see wage growth return to average levels.

Fourth, the flattening of the yield curve suggests less confidence in economic growth. Less confidence causes investors to buy long-term bonds which drive down long-term yields. Meanwhile, the Fed simultaneously raises short-term rates which lift the short-end of the yield curve up. Take a look at the chart below to see the change that has occurred within just these past three months. [x] 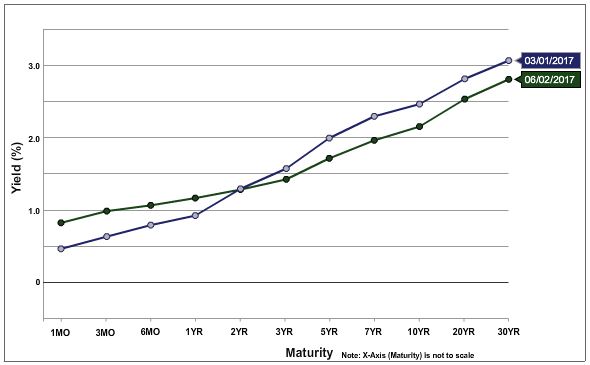 And last, one way we’ve seen uncertainty build surrounding potential disinflation/deflation has been due to the downward revision in the Q2 GDP NowCast from 4 percent to 3.4 percent from the Federal Reserve Bank of Atlanta. [xi] 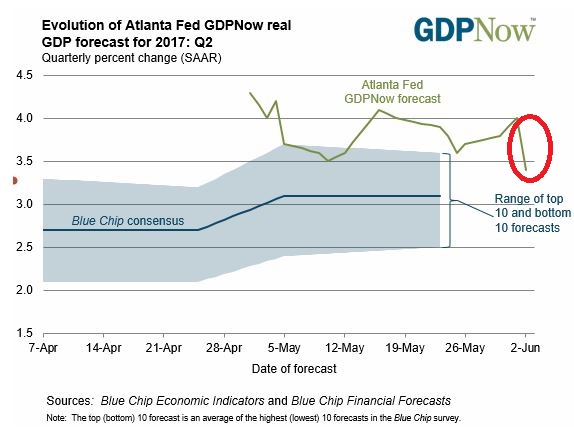 For these reasons, we at Phillips and Company continue to use active management in fixed income to efficiently move investments along the yield curve.  Dividend-paying assets, along with utilities, should be inclined to prosper when disinflation presents itself.

Furthermore, unless the data that the Fed uses to make their decision on rates shows an unexpected change, we anticipate one more Federal funds rate increase in June 2017.