Does Growth Get You Growth?

Finally, we had some decent U.S. macroeconomic developments. As reported on Friday, with U.S. GDP growing at 2.9%, this is the best quarter over quarter growth since mid-2014. [i] 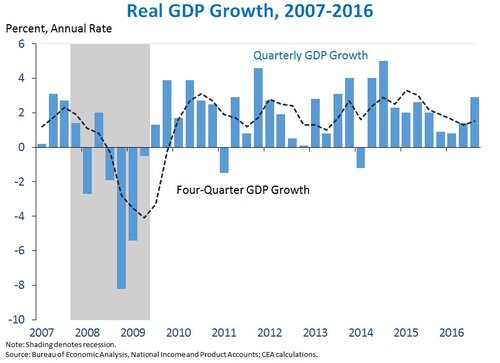 Behind the headline numbers lay some interesting details.

First, the U.S. Consumer (as we opined in our Q4 2016 Look Ahead) looks to be holding up their end of the bargain. Consumption grew at a stout 1.47% in Q3, down from Q2, yet still a very solid performance. [ii]

Second, in addition to the positive news regarding GDP, we had a reversal in business inventory. After five quarters of contraction, inventories rose by 61 basis points. [iii]

Third, a slight decline to the stable dollar in Q3 should promote a continuance of overseas sales growth. This adds to GDP, rather than detracting, as is the historical case. [iv]

These are all good signs and generally, on a long-range basis, GDP growth is correlated to equity returns; approximately 0.66, per one study. [v] 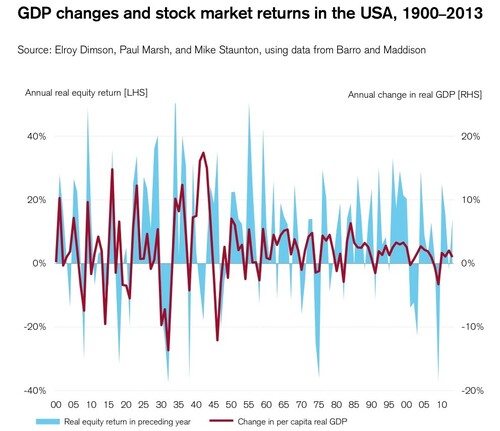 However, only in the case of comparing returns in a prior year, do you get a reasonable correlation with GDP growth in the following year, as the chart above suggests.

Oddly, when you look at longer periods of time, GDP growth is even less correlated to equity returns. Correlation is around 0.51. [vi] 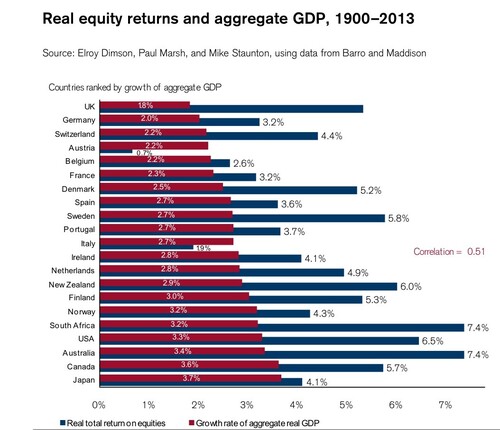 It's a bit counterintuitive to think that a growing U.S. economy will not necessarily lead to higher stock market returns.

Within the macro economy, expenses are generally associated with wages and salaries, like that of a company.

So, a rough formula would look like the following:

The bottom line is that the correlation is so loose because revenue growth leads to earnings growth, but only if expenses are kept in check. Further, U.S. GDP growth only measures our domestic revenues, yet many companies have both international and domestic revenue streams.

Today, we are seeing GDP growing, along with wages, salaries, and incomes. [vii]

Unless we see an increase in pricing power (inflation), this bump in GDP growth may not necessarily translate into earnings growth, and consequently, market returns. Higher expenses may erode future earnings.

The good news is that inflation is up, which should help corporate profits through higher pricing. In turn, the higher prices should filter down to earnings, absent wage growth outpacing inflation.

Does GDP growth forecast U.S. equity growth? Like most things economic, "it depends". However, based on my analysis, with reasonable inflation, corporate profits should see some improvement in short order.