On the back of the completed first round of the French election, markets both in the United States and abroad are having a great day.  Polling seems to show an improving lead for Emmanuel Macron over Marine Le Pen, which has certainly sparked another advantage for financials. [i]

Major political news can always shift markets up or down in the short run, but what really drives the equity markets are the company’s earnings.  Now I’m not going to get into modeling earnings and how we use this info to determine a fair trading price for a stock. But what I do think is important, now that we’re in the thick of companies reporting earnings for the first quarter of 2017, is looking at how earnings are shaping up so far, which can be a valuable indicator of the future direction of the equities markets.

So far, ninety-three S&P 500 companies, or 18.6% of the index, have reported earnings, with 187 companies scheduled to release earnings this week. [ii] Of those that have reported, 72% have beaten estimates by more than 1%, compared to a historical average of 65%.  [ii] Based on the chart below, at the start of the earnings season, the S&P 500 expected to see EPS growth of 9.1%. However, after the results thus far, it appears that the S&P 500 is on track to be almost a full percentage point above that. [ii] 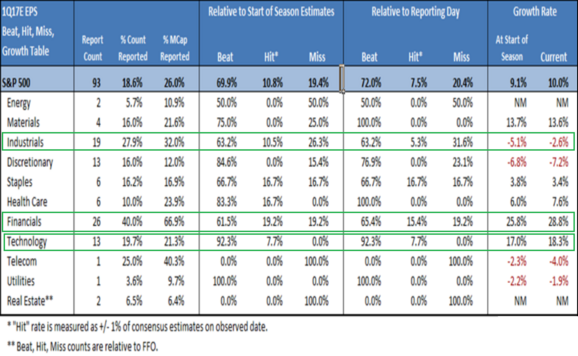 By my count, earnings growth has been largely the result of the Financials, Technology, and the Industrial sectors, as measured by the current growth rate versus the growth rate prior to companies releasing their results. 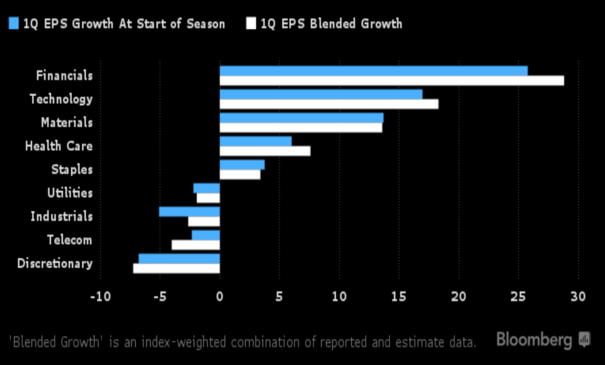 Another important aspect of a company’s earnings release is their guidance, which tells a lot about where management may see some headwinds or tailwinds.  Of the companies that have reported thus far, thirty-seven have reported full-year guidance for 2017.  [ii] Three companies provided improved guidance, whereas four companies revised guidance downward.  The more notable number is the twenty-two companies where guidance remains unchanged. [ii] 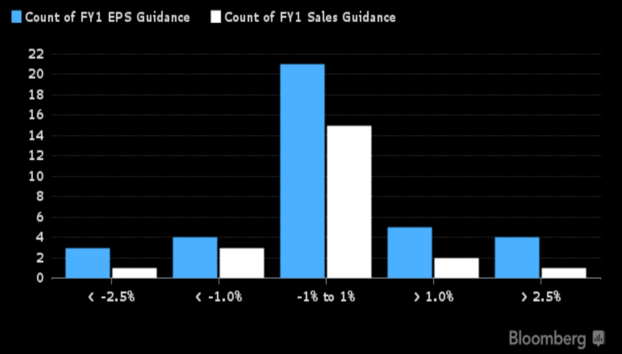 None of these earnings reports comes without caution, as I often note.  While many companies have reported earnings that exceed analyst estimates by more than 1%, it should be noted that analysts have been cutting their estimates drastically for quite some time now. [iii] 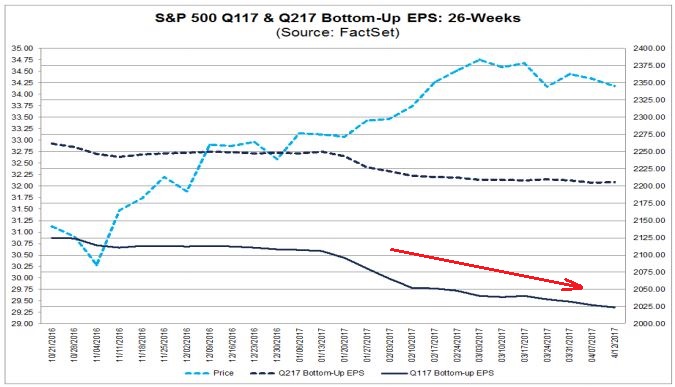 Analysts cutting back on earnings estimates will obviously bode well for companies because the bar is set much lower for them to exceed expectations.  In my opinion, this is driven by uncertainty around topics I have discussed at length, such as fiscal policy narrative, tax reform, healthcare reform, and the French election.  Regardless, earnings remain strong, and while we do acknowledge the uncertainty, we remain cautiously optimistic in the continued strength of the equities markets.