Last month, European physicists announced that they may have put a serious dent in Albert Einstein’s theory of relativity when they suggested it might be possible for something to travel faster than the speed of light. With relativity on the mind and a trove of economic data released last week, we decided to look at the actual numbers relative to what people were expecting. Surprisingly, most indicators actually beat expectations.

This doesn’t have the same ground breaking implications that the European physicists’ findings do about relativity and it doesn’t mean we are not slipping into or not already in a recession. It does imply though, that there may be some pretty negative expectations already built in.

After the sizeable decline in July the market was relatively directionless and range bound for the remainder of the third quarter. Emotions seem to be ruling the day and a directionless market can still churn stomachs. The average daily change in the index for the last 40 days of the quarter was +/- 1.9%!

Continuing with the theme of relativity, we looked at how the market performs on average during different quarters of the year. 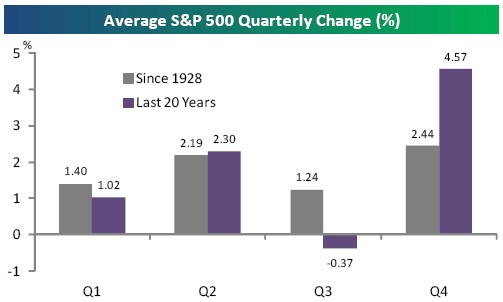 If we have already built in negative economic expectations and people are fearful due to the volatility, then a few economic surprises and little consistency this quarter could go a long way in providing a nice return backdrop for the fourth quarter, relatively speaking of course.

If you have additional feedback we encourage you to get in touch with us via Twitter, Facebook, or Email me directly.

Hat tip to the Bespoke Investment Group for the charts and tables.