Investors are pulling their funds from Europe and deploying capital in the U.S. and Emerging Markets, leading to a new record with $86.0B so far this year flowing out of European funds for the past six months. This represents more than two-thirds of last year’s inflows of $123.0B. [i] The previous record for fund outflows from Europe was during the financial crisis. [ii] 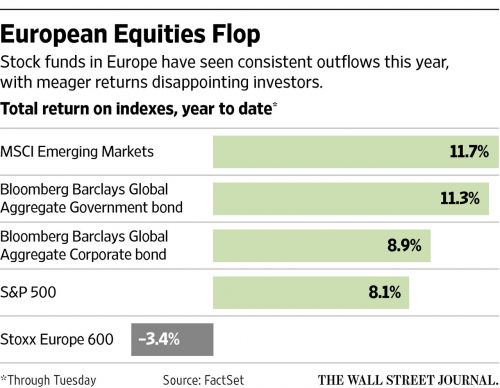 In late 2015, money flowed into European funds as the world expected a more hawkish Fed to raise rates. Yellen hasn’t nudged the Fed rate above its current .25 - .50 floor since last December, at the time Yellen signaled that four hikes were likely in 2016. [iii] Investors believed raising rates would, among other factors, hurt American consumption, causing them to pour money into Europe.

Raising short-term rates last December caused the dollar to surge. With returns for U.S. investors dampened by the rising dollar, money continued flowing to Europe. For now, the strengthening dollar seems to be contained from its January peak. [iv]

A dovish Fed, who’s driving domestic stock valuations higher via policy measures, is not the only catalyst for the outflows from Europe this year. Across the Atlantic, there is a lack of opportunity for investors. Europe is suffering from a lack of confidence; in fact, EU consumer confidence has been in steady decline since March of last year. [v]

Eroding confidence in Europe can be attributed, in part, to the following three factors:

This is a short list of ailments facing investors in Europe. As we peel additional layers from the onion, we can see how alternatives for investments become more appealing.

The BREXIT exposed Europe’s political risk. Much like economic risk, political risk in Europe has been suppressed by quantitative easing (QE) and central bank intervention. Yet the rising populist sentiments in Europe may not be fixed by further QE. The next major test for the EU will be the French Presidential election in the Spring of 2017. Both Presidential candidates are running “Eurosceptic” campaigns.

Countries calling for their own referendums after the BREXIT include France, the Netherlands, Denmark, and Sweden. All of Europe has a growing Euroscepticism problem, which could pose a threat to the makeup of the EU. [vi] 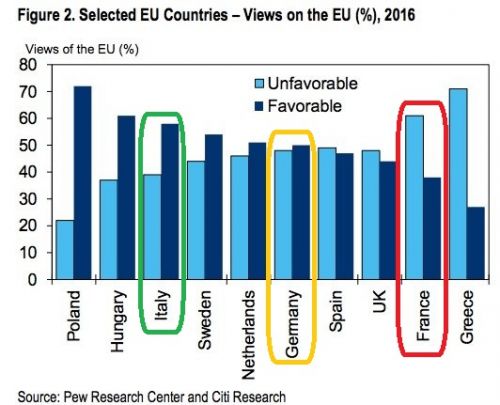 While the Fed is deciding when to raise rates, Europe is experimenting with how low rates can go. The idea is to spur inflation and growth by giving lending a needed jolt. The unorthodox move by the European Central Bank to go negative in 2014 (-.10%), then cut rates again in 2016 (-.40%), which lead to central banks in Sweden, Denmark, and Switzerland doing the same, has forced investors to seek elsewhere for yield. [vii] 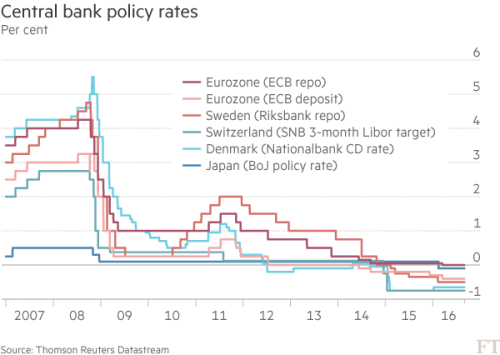 In pursuit of yield, money is flowing at a record pace to the Emerging Markets. [viii] 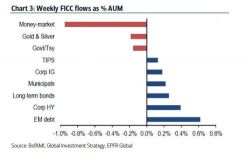 The economic malaise is back as another European financial crisis looms on the horizon. The last European financial crisis was triggered by sharply escalating interest rates on government bonds that swept up most of the EU’s Southern members including Greece, Cyprus, Italy, Spain, and Portugal. Ireland, at the other geographic end of the EU, was also included. The fear was that the countries would not be able to meet their debt obligations.

Italy is at the forefront of the coming banking crisis. Nonperforming loans in Italy exceed €360 billion euros ($400 B) and amount to 18% of all bank loans in the country. [ix] 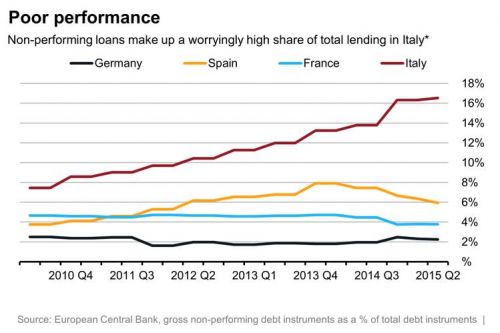 A picture is worth a thousand words when explaining investor’s response to Italian non-performing loans and bank’s profits, which are being squeezed by negative interest rates. 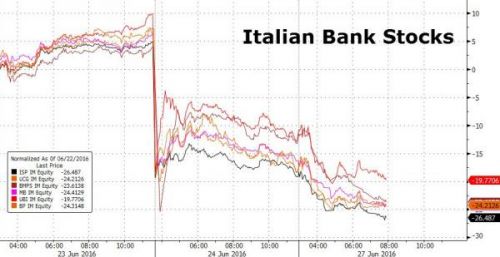 When looking at the valuations on a relative basis, Europe appears to be a little more attractive than the U.S., but when layers of the onion are peeled back, it is certainly cheaper for many reasons. [x]

Click here for last week’s blog, where we highlight the strengths of the U.S. economy.