I recently spent 8 days in the middle of Wyoming seeing some amazing country and fishing on some spectacular streams that meander through some of the largest ranch property in America. In those 8 days, I didn't see another angler.

However, I know there are more people fishing in Wyoming than me. In fact, last week there were some of the leading economists, central bankers and policy makers in the world "fishing for answers" in Jackson Hole, Wyoming. The Federal Reserve convened its annual policy summit there and this year focused on the labor market.

"In this regard, a key challenge is to assess just how far the economy now stands from the attainment of its maximum employment goal."[i]

As we all know, interest rates touch many aspects of our daily lives and certainly are a major factor in our investment approach. One thing is clear to me from reading her entire statement - fishing might be an understatement of what's going on in Wyoming.

Yellen said, "More jobs have now been created in the recovery than were lost in the downturn, with payroll employment in May of this year finally exceeding the previous peak in January 2008. Job gains in 2014 have averaged 230,000 a month, up from the 190,000 a month pace during the preceding two years."[ii,iii,iv]

However, it's also apparent from her statement that the Fed is very uncertain as to how much of our current labor slack, most notably the persistent decline in the labor participation rate, is due to cyclical factors or structural issues.[v] 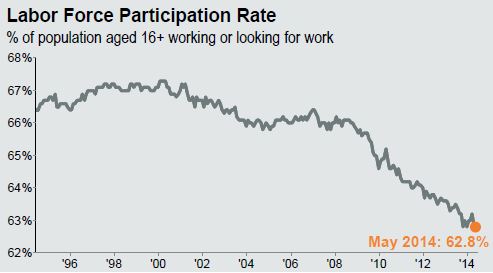 It's noticeable from her statement that the Fed will spend considerable time trying to answer what is cyclical and structural in order to set interest rate policy. Yet they seem confused:[vi]

"...the task has become especially challenging in the aftermath of the Great Recession, which brought nearly unprecedented cyclical dislocations and may have been associated with similarly unprecedented structural changes in the labor market--changes that have yet to be fully understood."

"So, what is a monetary policymaker to do?" Yellen laments.

Perhaps we can answer the question for ourselves and get a bit of a jump on the Fed. A recent paper published by the Peterson Institute suggests of the 4 percentage point drop in participation from the 2000 peak, 1.5 to 2 percentage points were attributed to the aging of the labor force.[vii] 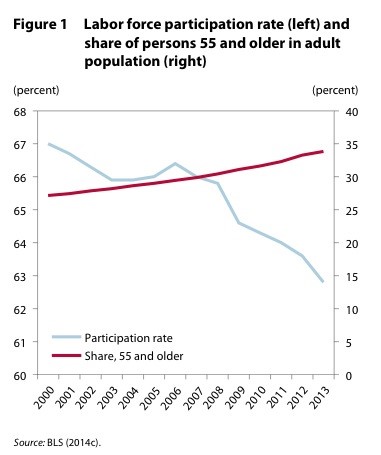 Another percentage point could be from the long-term unemployed whose skills may not match current labor needs.

That leaves 1 to 1.5 percentage points of cyclical factors impacting participation in the labor force. On the face of it, that's not much in terms of cyclical factors and one might expect the Fed to jump sooner rather than later, perhaps as early as the first half of 2015.

However, one additional factor might be more structural, accounting for the points the Fed might be confusing as cyclical.

As of 2012, there were over 109 million Americans receiving "means-tested" US Government provided benefits.[viii] That's 35% of the population.[ix] If you factor in the means-tested ObamaCare benefit (which is not included in these numbers, as the data has not been released for 2014) this statistic is going to grow substantially. The table below shows the number of recipients in 2012 for means-tested US Government programs and the income eligibility requirements.[x]

While I don't pass any professional judgment on these welfare programs, you can see from the data above, it's harder to move from welfare to work. To me that's structural, not cyclical.

The good news is the Fed can probably spend the next 6 months, or longer, trying to fish for answers on the 4 percentage point drop from peak participation. We might benefit from lower rates for a longer period than actually needed by the economy.