Gas, GDP, and Equity Returns - Tying It All Together

This Wednesday, we will get confirmation on what has been the most anticipated economic event of the year, United States Q1 GDP growth. We may also receive insights about the economy and interest rates from the Fed, which has a meeting this week as well.

It's clear that some of the factors that will impact the outcome will be the following issues:

What should have offset much of this is US Consumers spending down their savings generated from the sharp drop in gas prices. Prices were around $2.00 to $2.50 per gallon in Q1, well below their high near $3.70 in 2014.[v]

However, you can see the US Savings Rate has not dropped, but actually increased.[vi] It appears consumers are not ready to spend down their gas savings windfall. That will certainly be a drag on GDP.

It's clear to me US consumers must still be concerned about something to be holding onto their gas savings this long. In fact, according to Gallup there may still be some lingering impact from the financial crisis lurking in the brain of the US consumer.[vii] 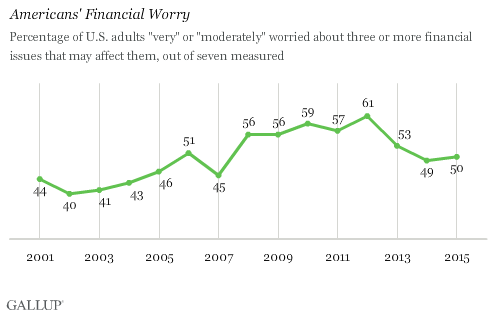 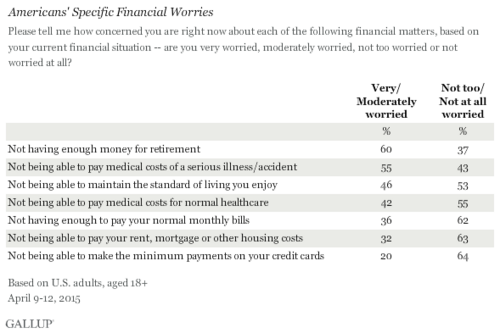 While not at their post-financial-crisis peak of "worry", Americans are certainly not back to pre-financial-crisis "worry" levels. I believe this worry-induced savings will be reflected in the upcoming GDP report.

A recent study conducted by the Saint Louis Federal Reserve suggests the gas price windfall will trickle into our economy and not simply sit in the banks.

You can see from the data table above, after episodes of falling gas prices consumption increases by an average of 0.63% and inflation drops by 1.05%.[viii] So we can anticipate stronger GDP growth in Q2 and continued low inflation, which should put a Fed interest rate increase on hold for a longer period of time and perhaps provide a weaker dollar environment relative to the Euro and Yen. That should add to GDP growth with a smaller trade deficit.

It would seem intuitive that the GDP report on Wednesday may cause concern to equity investors as it is expected to be fairly weak relative to Q4 2014. Economists estimate Q1 2015 GDP at 1.4% compared to 2.2% in Q4 2014.[ix]

However, there is in fact little correlation between GDP growth numbers and equity market performance. From our friends at GMO, we can see the data clearly in the chart below.[x] 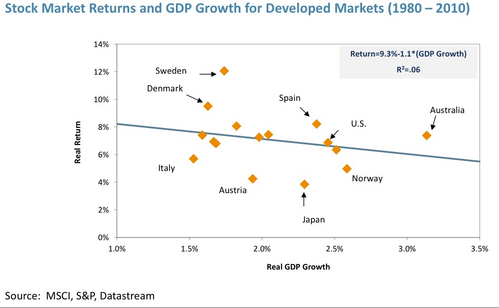 To the contrary, countries with slower GDP growth had better real stock market returns. It appears that in the long run, GDP growth and earnings per share growth might not be as highly correlated as you might expect.

According to GMO's extensive research on this subject, it appears what matters most to GDP growth and market returns are the surprises that can occur on the earnings side of the equation.

We have followed that trend closely and are in the midst of an earnings season that has a very strong potential for a surprise to the upside.

US GDP growth will be a challenging number to review on Wednesday, but it may also be surprisingly positive for the US equity markets in the longer run.

[i] Weather.com. (Mar 8, 2015). An Estimated $1 Billion in Lost Wages and Profits After Winter Storm Barrage in Massachusetts.