Last week, we discussed the details of the Bureau of Economic Analysis’ (BEA) advance estimate of US real GDP for the third quarter. Sticking with the GDP theme, later that week the Federal Reserve came out with their fourth and final GDP and unemployment projections for the year. 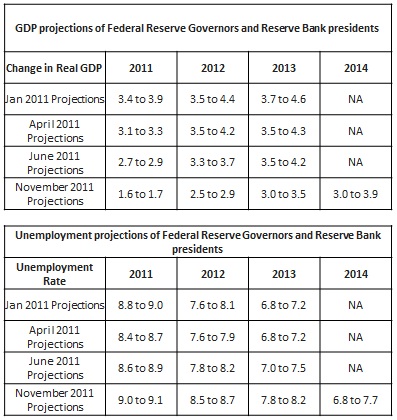 According to an analysis by Bill McBride, author of the economics blog Calculated Risk:

If we continue to see sluggish growth with 125,000 payroll jobs added per month (the pace this year), it will take an additional 52 months just to get back to the pre-recession level of payroll employment.

If job growth picks up a little - say to 200,000 payroll jobs per month - it will take an additional 33 months to get back to the pre-recession level.

Based on those numbers, unemployment won’t return to the pre-recession level until somewhere between July 2014 (blue line) and February 2016 (red line). McBride also notes that these projections do not include population growth and new entrants into the workforce.

While these numbers might be slightly depressing, it’s important to realize they are moving in the right direction, albeit slowly. GDP numbers continue to stay positive and we continue to have positive net jobs added per month. For now it looks like the US will avoid a “double dip” recession and continue its slow growth trend. In fact, Merrill Lynch and Goldman Sachs raised their Q4 GDP forecasts on the heels of the BEA numbers last week citing the same reasons we did previously, improved domestic demand and increased consumer spending.

It’s important to protect your portfolio from downside fluctuations, but it’s equally as important to not get caught flatfooted and miss a potential year-end rally. Historically, November and December are two of the best months of the year for US equities.

Between the European Debt Crisis and our own fiscal problems there are plenty of downside catalysts, but if the consumer decides to spend more than expected this holiday season we could continue to see positive surprises in consumption and GDP.