Higher Interest Rates: Are We There Yet?

With the Federal Reserve taking extraordinary measures since 2008 to lower interest rates, we know that rates will have to go higher eventually; it’s a question of when and how quickly?

The Fed typically offers vague guidance on future interest rate policy, much like parents answering a child’s constant inquiries of “Are we there yet?” on a long road trip. While I used to find such responses frustrating, I now recognize that answers like “Almost” or “We’re getting closer” avoided setting up expectations when uncertainty could change the timeline.

In her first press conference as Fed Chair, Janet Yellen was a little too specific when she commented that interest rates could rise about 6 months after the bond-buying program ends (sometime in 2014 Q4), which means around April 2015.[i] This timeframe was sooner than the market expected, causing intermediate-term yields to jump as seen on the yield curve chart below. 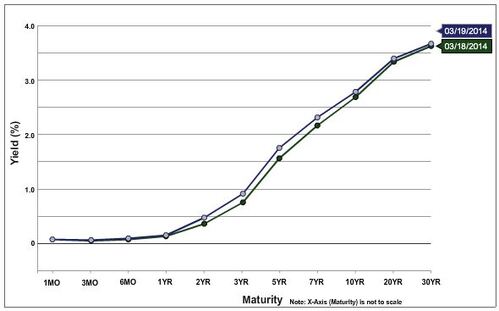 Overall though, the Fed’s intentions did not change. It dropped the guideline of a 6.5% unemployment rate for considering a rate hike, but we are already near that rate.[ii] The Fed now plans to look at a “wide range of economic indicators” to inform decisions on overnight rates.[iii] Based on the US economy’s tepid growth and low inflation, there’s little reason to raise rates at this time and perhaps not until later in 2015 depending on what happens. The most recent FOMC expected Fed Fund rate estimates continued to show very low rates through 2015, though they inched up since December’s estimate, but more so for 2016.[iv] A rate hike for 2014 appears less likely based on the lower rate projection.

But even when rates finally increase, does this spell immediate trouble for the fixed income and equity markets? Perhaps not, based on research by Kathy Jones, VP/Fixed Income Strategist at Charles Schwab.

Today’s bond-buying policy is similar to the 1940’s, when the Fed absorbed much of the bond supply to keep interest rates near zero. The Fed’s holdings rose to 22% of GDP, comparable to the increase we’ve seen since QE began in 2009.[v] 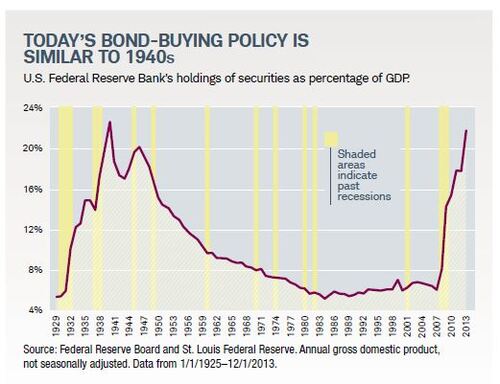 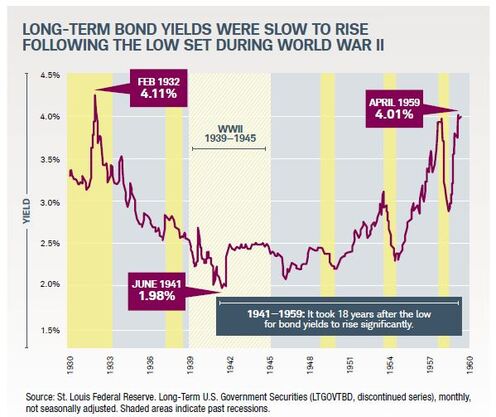 Despite differences in our current situation, Jones noted that history teaches us that:[vii]

Of course, whether history repeats itself is the million-dollar question. While data suggests that rates may stay low longer than anticipated, sudden interest rate shocks can punish long-duration portfolios in the short term. For example, when the Fed first discussed tapering last spring, 10-year rates increased over 100 basis points from May to September and longer-term Treasuries fell in response. 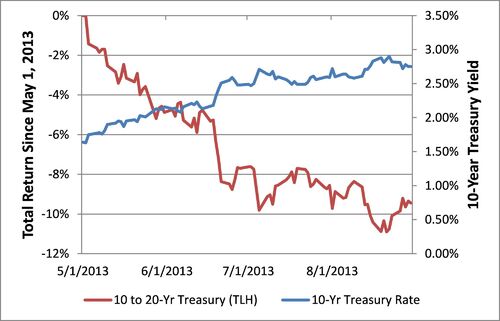 With rate increases apparently at least a year away, adding a modest amount of duration (1 or 2 more years) to a portfolio with a current duration below 5 years may be a reasonable idea, as long as you can withstand the volatility.

Even after the Fed begins to tighten credit, Goldman Sachs found that historically the S&P 500 peaked 18 months later on average, suggesting that the stock market may have more upside.[viii] 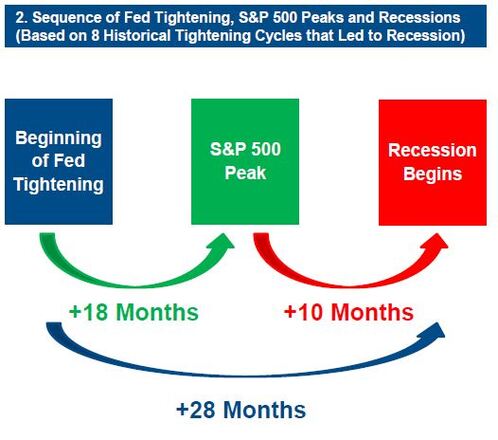 Convertible bonds may be a fixed income alternative to consider, as they benefit from a rising stock market. Banks should also benefit from the steepening of the short-end of the yield curve, as long as the very short rates stay near zero.[ix]

With Yellen likely to be vaguer with her future responses to the question of when interest rates will rise, we’ll keep monitoring the economic sign posts as we continue along this long road to economic recovery. We aren’t there yet, but we’re getting closer.