Life on the Edge

It appears the one trend we wanted to see a reversal in continues on a downward trajectory.... Earnings.

Each week we see more analysts push back their expectations for a recovery in earnings growth of the S&P 500 companies. This week was no exception. While earnings growth has been negative the last three periods, the outlook for the current and following period doesn’t look any better.

You can see the trend below, estimates for 2016 Q1 [i] have been coming down at an accelerated pace: 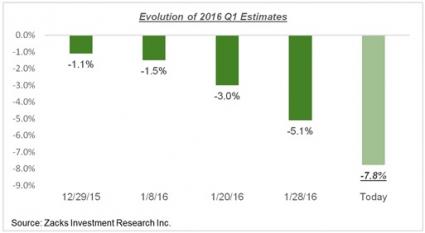 Taking energy out of the forecast does not provide much optimism. The other sectors for 2016 Q1 estimates are falling as well and earnings misses have become much more broad based. [ii] 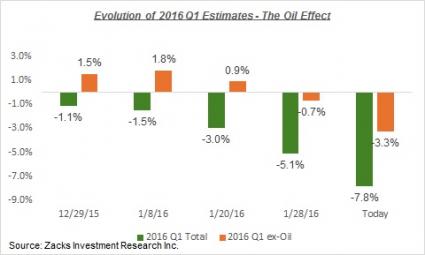 We had been anticipating Q2 being the turning point for when earnings return to growth, yet it now appears analysts expect all the year’s growth will come during the second half of the year. [iii] 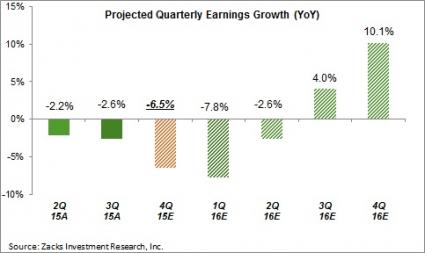 The reversal in earnings expectations started about 14 weeks ago, the same time as holiday shopping season kicked off. Although the markets did sell off at the end of 2015, the earnings forecast does not seem to be what investors are focused on.

We have only had a few periods when earnings shrank for 4 consecutive quarters or more. During only two of those periods, ’85-86 and ’97-98, we were able to shrug off an accompanying economic recession. [iv] 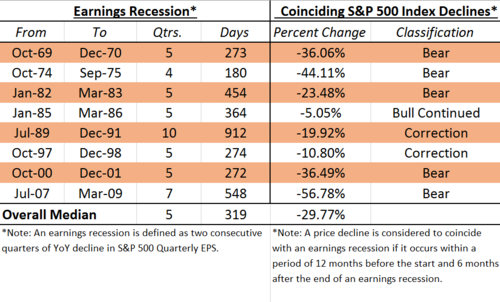 In light of earnings growth being delayed until the second half of 2016, why have markets been so positive the last two weeks?

In my opinion, investors are clearly more interested in the macro economy and Federal Reserve intervention as opposed to earnings. After all, we’ve been living with the “new normal” for the last 8 years.

Personal income is on the rise and we added a touch of inflation that should ease any fears we are slipping into a deflationary spiral. [v] 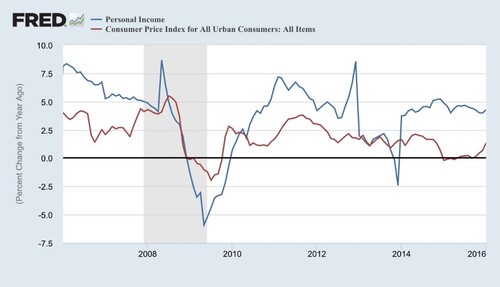 It’s clear consumers are willing to spend their income, and that should put a floor on any possible economic recession worries. [vi] 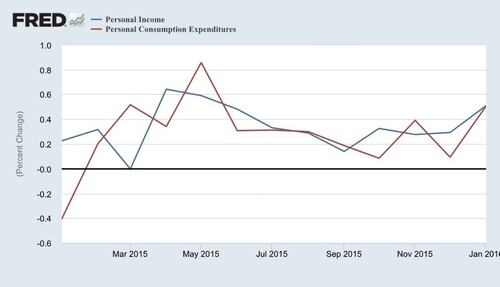 Consumers also have plenty of dry powder in their wallet to spend as well. Personal debt service as a percentage of disposable income (red) is at historic lows and savings (blue) from the gasoline windfall are still sitting in consumer’s bank accounts. [vii]

While I still believe we need to get corporate earnings growth on track sooner rather than later, I’m not quite ready to say we are perched on an economic recessionary cliff. However, fasten your seat belts as volatility will be the norm until we get closer to earnings growth.