Man of Steel – Fight or Flight 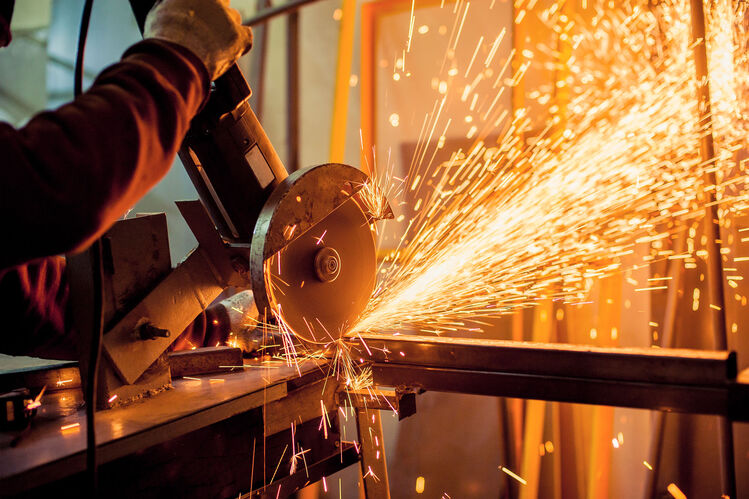 The headline-grabbing Trump administration outdid itself this week, once again, after announcing steel and aluminum tariffs likely to be enacted next week.  [i] Not surprisingly, the market reacted violently to this announcement. [ii] 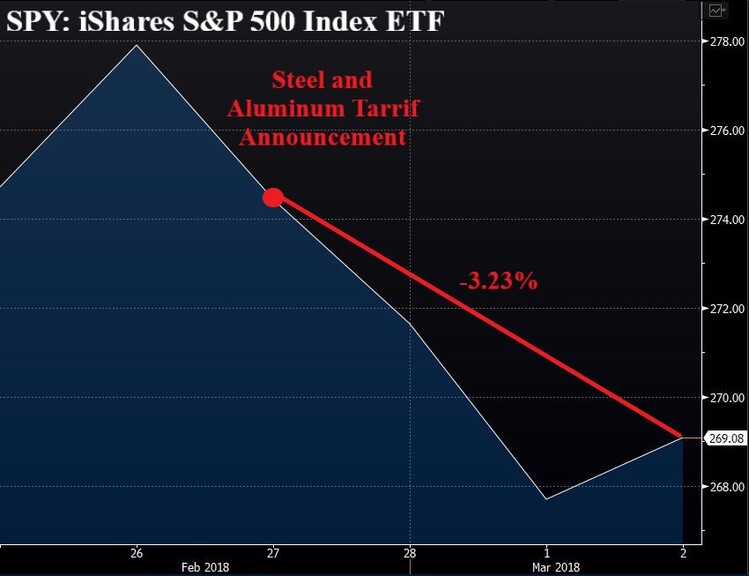 Furthermore, U.S. equity volatility, as measured by the VIX, aka the “Fear Index,” jumped significantly following this news as well. [ii] 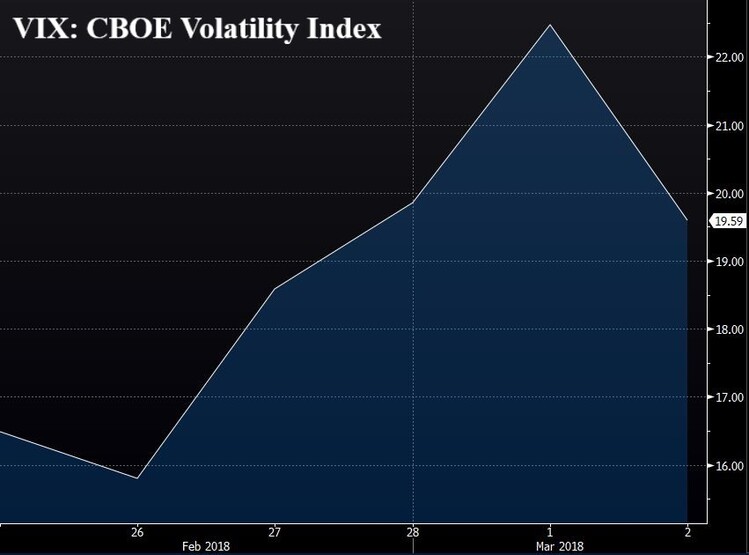 Once again, this is simply a reminder of what it’s like to be an investor.

Given the recent market action following this announcement, it’s worth examining some simple facts about steel and aluminum tariffs.

First, these industrial jobs are old (albeit important if you have one of them) and have been on a steady decline since the early 1990s.  [iii] 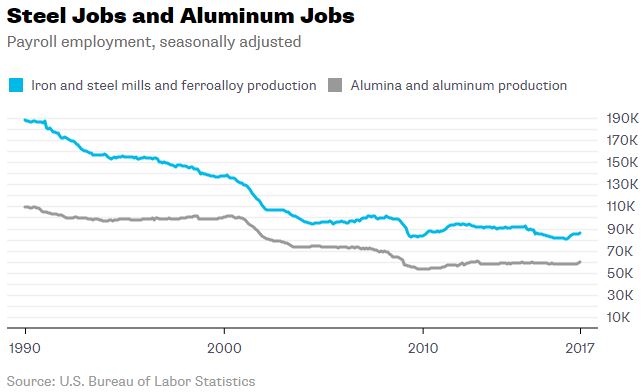 Second, despite the hope that these tariffs will stabilize and bring about a recovery of jobs within these industries, past tariffs have helped little with that.  The most recent attempt was President Bush’s tariff on steel in 2002. [iii] 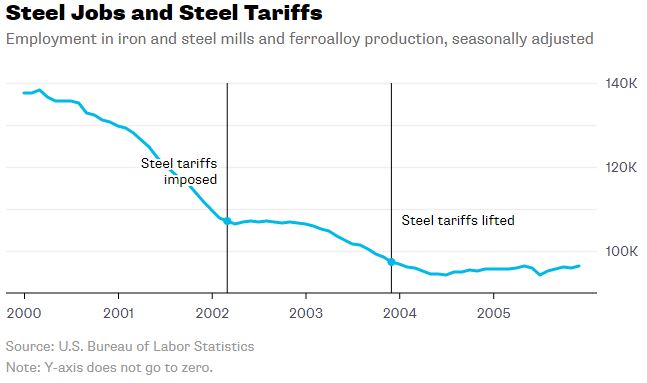 And third, in many instances, these tariffs may be all for show, just in time for the midterm elections in Pennsylvania and other Rust Belt states.  For starters, Pennsylvania’s 18th Congressional District special election is next week, right in the heart of the Rust Belt.  In fact, if you look at the number of jobs in these states tied to steel, it is significant.  [iv] [ix] 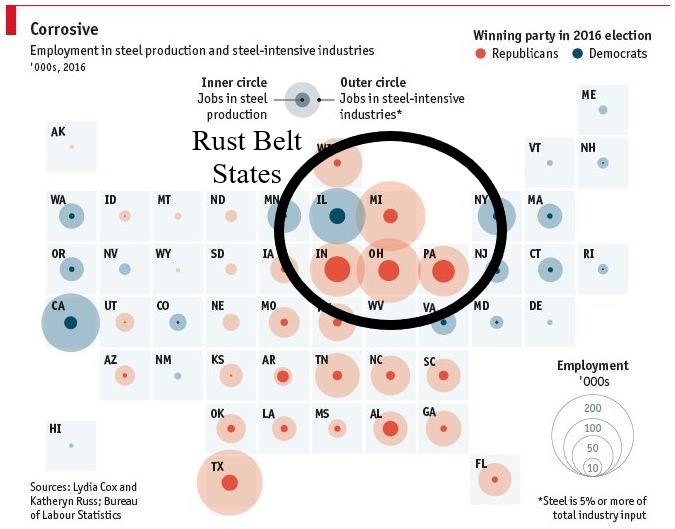 In my opinion, this looks like a “get tough on China” move, as Trump promised many times during his presidential campaign.

“I have very big relationships with China, but the fact is China is the great abuser of the United States economically and we do nothing about it, and it would be very easy to stop." – President Donald Trump [v]

Although Trump did not single out any country when announcing his steel and aluminum tariffs, it’s evident he is signaling to his voters who have lost jobs to the “old economy” that he plans to keep his promise of restoring jobs in certain communities.

In fact, China is probably the least concerned with Trump’s actual tariffs on steel and aluminum.  Very little of our imported steel comes directly from China as it is.  [vi] That’s not to say that China is not dumping steel in other countries, and those countries are in turn exporting steel to the United States. 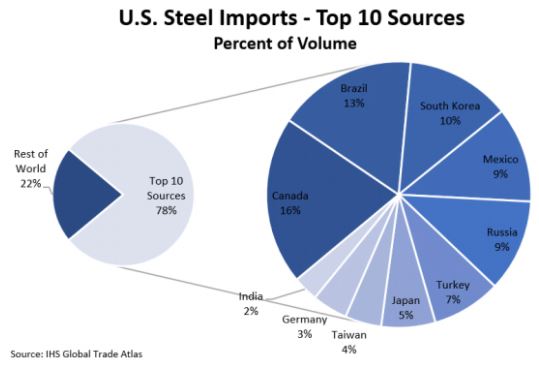 China ranks eleventh when it comes to direct U.S. imports of steel.  One thing to note is that 25 percent of our imported steel comes from Mexico and Canada, who happen to be in contentious free trade negotiations with the United States.

Regardless of whatever this window dressing may be, it’s no secret that there are short-term consequences within the equity markets.  Case in point: a resurgence in elevated volatility and frequent market pullbacks could very well lead to an overall market correction.

Remember that in 2002, when President Bush announced a steel tariff, the U.S. equity markets corrected more than 25 percent over the following twelve months. [ii] Now, it’s worth noting that this correction was attributed to a broader theme of potentially expanding trade wars; it’s possible that Trump’s tariffs may lead to a similar situation, in which case the U.S. may experience a similar market correction. 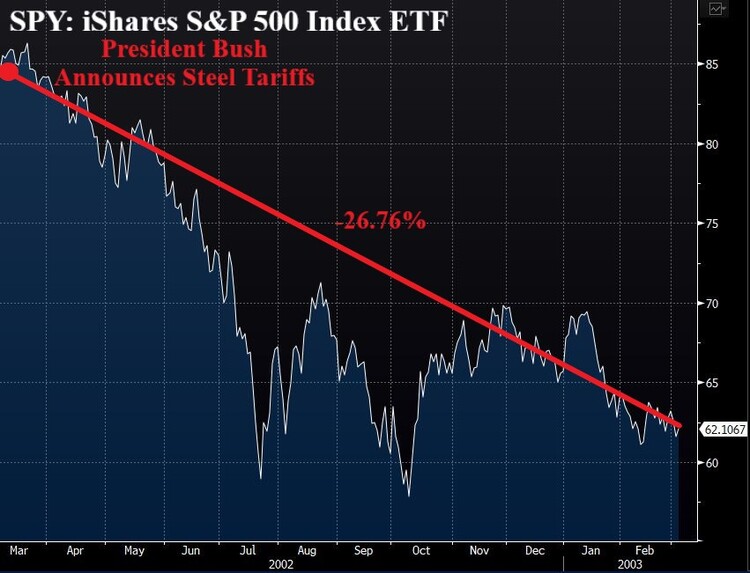 Another monumental impact that’s worth mentioning, as it relates to these tariffs, is the pressure they put on our trading partners, who also happen to be large holders of U.S. Treasury Securities.  That might cause these countries to retaliate by dumping their holdings into the marketplace, which would inevitably lead to significantly rising interest rates. [vii] 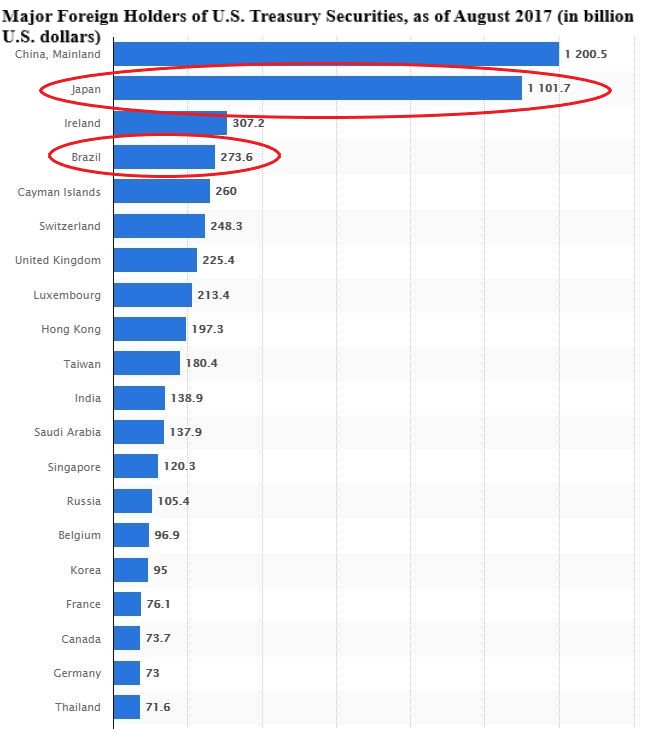 However, I seriously doubt Japan will dump any of its U.S. Treasury Securities because its national security depends entirely on the United States. As for Brazil, their holdings just aren’t that significant.  [vii] [viii]

The following simple question remains for investors: Do we [investors] have the patience to withstand some of this political theater that may result in a market correction of 20 percent or more in U.S. equity markets?  I think it’s worth reminding our readers to think back to when Trump was elected president many investors ran for cover and moved their investments to cash.  Simply put, that proved to be the wrong move.

The problem with investing is that much of it is counter-intuitive.  You buy things that are dropping and sell things that are rising.  You run toward the danger and pain, not away from it—not exactly the type of behavior that has helped us survive for millennia.

However, that may be exactly what we need to do considering the facts, headline-grabbing, and fear-mongering going on. Fight or flight may not be the formula for successful investing.