As expected, the Federal Reserve confirmed last week that it would end its QE3 bond-buying program. The Fed still holds over $4.4 trillion in assets that it has purchased over the last six years, but will no longer provide additional stimulus to the economy.[i] When previous quantitative easing programs ended, the stock market declined.[ii] 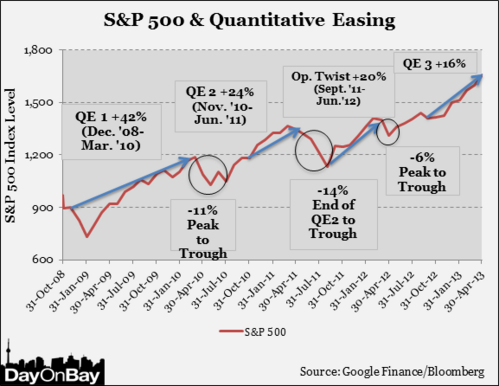 With the Fed taking its foot off the accelerator, what will keep the market moving forward? Right now it’s Q3 earnings, which are coming in well above the low 1.3% projection back in late September and over 70% of companies have beaten their Q3 earnings expectations.[iii,iv]

Going forward the US economy will depend on consumption, which makes up about 70% of GDP.[v] While initial estimates for Q3 GDP growth came in at 3.5%, this was mostly due to increased government spending.[vi] Q4 typically sees a decline in government spending, making consumer spending even more important. However, personal spending unexpectedly declined 0.2% in September, its first decline since January.[vii]

There are positive indicators for consumer spending to pick up in Q4 though. First, consumer confidence is at a 7-year high as increased job security and cheaper gas brightened the economic outlook for many households.[viii]

The unemployment rate fell below 6% in September and Q3 wages grew about 0.8% from the previous quarter, the largest percentage increase since Q2 of 2008.[ix,x] 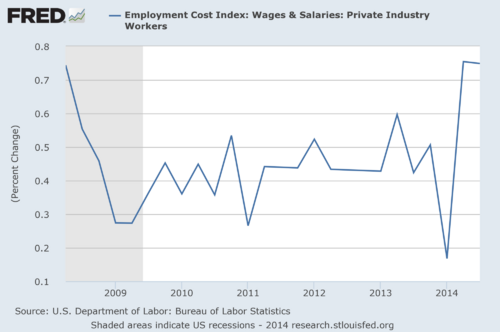 The US consumer’s pocketbook is also benefitting from gas prices falling below $3 per gallon for the first time since 2010.[xi] As we mentioned in a previous blog, this could provide the average household with an additional $500/year to spend.[xii]

Higher spending will also depend on increased consumer borrowing. Though the Fed stopped buying bonds, it pledged to keep rates low “for a considerable time”.[i] Projections are for rate increases to start in mid-2015, but with low inflation and continuing concerns about growth (both in the US and globally), these increases may be delayed.

In addition, recent activities in Japan and Europe may also keep US rates low. Japan announced an unexpected quantitative easing program last week and the European Central Bank has also said it will begin buying bonds to provide a boost to its economy. This monetary policy could propel these developed equity markets higher, similar to what occurred in the US under the Fed’s QE policy. The new easing policies will lower interest rates in Europe and Japan even further, increasing demand for US bonds and lowering US bond yields.[xiii] 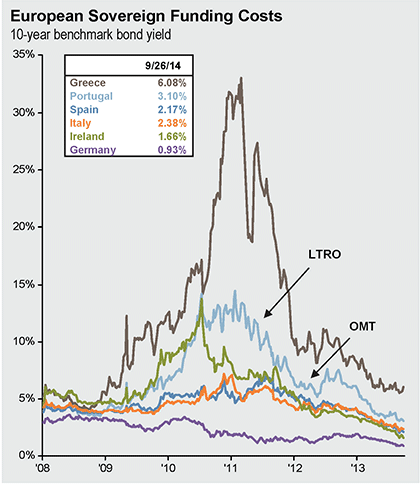 But will consumers take advantage of the continued low rates to borrow and spend more? The answer appears to be “yes”, at least on the borrowing side. Banks keep loosening lending standards and recent trends show an increase in demand for auto and credit card loans.[xiv] 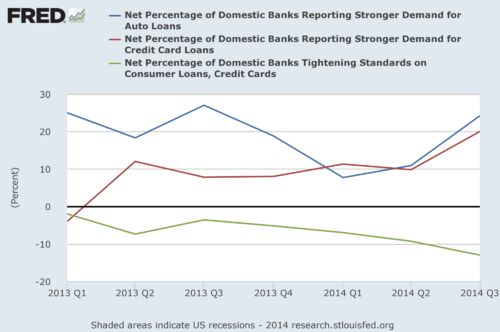 The stage is set for consumers to lead the economy forward. The big question is will we see higher spending? We will find out soon as Black Friday, the kickoff to the holiday sales season, is less than a month away.

Based on the current economic environment and data, we are:

Expect market volatility if second-half Q3 earnings come in below expectations or if Black Friday sales are weak. With the S&P 500 and Dow at all-time highs and the Fed no longer providing stimulus, the market likely won’t be patient waiting for consumers to take the wheel and drive economic growth.