Obamacare by the Numbers

With so much discussion, debate and concern being expressed by the rollout of the Affordable Care Act, also known as Obamacare, I think it's critical to look at the program and its economic impact in the simplest terms. 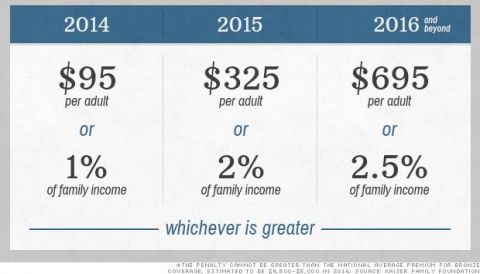 There are some variables to these fines if you get into the details. The short explanation is that the fines are minimal in the first few years, and they grow to get closer to what you would pay for insurance coverage in 2016 from the exchange. Also, there are really no teeth in the ACA to allow for collection of the fines other than on tax returns.

Another factor is two new taxes: first, the top income-tax bracket will pay an additional 3.8% tax on income and capital gains in 2013 and due in 2014, and secondly, high-income taxpayers will pay 0.9% more on the Medicare portion of their payroll tax. In total, the Joint Committee on Taxation estimated this to be $20.5 billion for tax year 2013 (paid in 2014). [iii]

The last major issue that needs to be considered is the rating system Obamacare places on insurance carriers administering Medicare Advantage products. The system rates carriers on a 5 star rating system based upon services covered, responsiveness to customer needs, and other metrics. Carriers could get different reimbursements from Medicare depending on where they rank on the system, and this could create uncertainty for current Medicare Advantage users.

Like any insurance risk pool, Obamacare needs more healthy participants than sick participants. Without the correct blend, the risk pool costs rise rapidly and insurance firms can withdraw out of concern for accumulating losses. Here’s what could happen:

1) Based upon the premium costs in 2014 for the individual versus the penalty, it's clearly worth waiting until you’re sick to sign up—especially if you’re making low income and don’t pay taxes (i.e.: the only way the ACA fine can be enforced). The healthy can defer until at least the third year when the penalties grow closer to equilibrium with the premiums.

2) People on individual plans are estimated around 19 million [iv], and these plan holders are facing some termination risks. The most recent proposal being floated in Washington allows insurance firms to extend previous policies. The outcome from this is pretty obvious; if you’re an insurance company that can now pick winners and losers for a year, you’re going to re-sign your healthy policy holders and dump the sick ones. They can shop on the exchange.

3) Obamacare has two key subsidies: one for premiums, and one called a “cost-sharing subsidy” for deductibles and co-pays. The premium subsidy is exempt from sequestration, but the cost-sharing subsidy could theoretically be sequesterered. [v] This could become another battleground in January 2014, when the continuing resolution that re-opened the government is set to expire.

First, the risk pool looks like it will be tilted toward the sick, creating tremendous pricing problems in 2015.

Secondly, If 50% of the 19 million individual plan holders lose their policy, that's a loss of $2.04 billion in premiums (average individual premium nationally is $215 according to the Kaiser Family Foundation). [vi]

Finally, the Obamacare tax will take $20.5 billion next year and redistribute it to insurance companies and health care providers.

Based on these numbers, the immediate impact of Obamacare will be $22.9 billion, or 0.13% of GDP.

To itself, the immediate impact of 0.13% of GDP isn’t much. The bigger concern is the uncertainty that these new regulations can have on long-term health care costs, which currently totals to 17.7% of GDP. [vii] If Obamacare disrupts the risk pool for insurance, this could have a more serious impact on the economy than just the immediate impact of the taxes and potentially dropped premiums.

That’s the real issue that we need to watch out for.