One Single Word From Our Sponsor

It should be no surprise to any investor that the economy, and in many respects the US equity markets, have been propped up by the Federal Reserve's quantitative easing (QE) over the last 6 years.[i]

On Wednesday of this week, the Fed will convene to discuss the future of interest rates and the actual amount of QE they will withdraw. It will come as no surprise if the Fed pulls another $10 billion a month from QE bond purchases, bringing their monthly bond purchase down to $15 billion.[ii] At the current pace, the Fed will have completed its QE bond purchasing program by the October 29th meeting, which is also entirely expected by the investment community.

Fed Chairwoman Janet Yellen's comments, as they relate to her guidance on the timing of interest rate increases, will be of particular interest.

In the Fed's July release, she stated the committee thinks it "...will be appropriate to maintain the current target range for the federal funds rate for a considerable time after the asset purchase program ends...".[iii]

One Word – Considerable. What does that mean?

From her prior statement in March, Yellen suggested considerable, "...probably means
something on the order of around six months, that type of thing.”[iv]

It's quite possible she could signal a change in that one word. Perhaps she could intimate a shorter period of time using words such as "immediate", "truncated", "transitory", or "ephemeral".

They went on to suggest that policy makers should consider the structural nature of the declining rate when considering interest rate policy. In other words, don't expect the economy to return to normal participation any time soon, so you might want to get on with your rate increases. (My interpretation, not the Fed economists).

Take a look at their data, which forecasts a decline in participation mostly driven by retirees.[v] 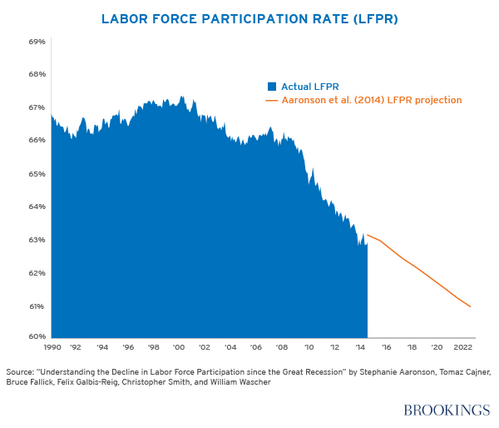 They went as far as to study the trending declines over long periods of time. Depending on the way they calculated the LPFR, 1.3-1.5% points of the 2.8% decline is due to aging during the current financial crisis (see the first column in the table below).[vi] Going back to 2000, you can see a dramatic percentage of the decline attributed to aging.

The economists went on to build their own forecasts and compare them to other "reputable" prognosticators. No one expects an increase anytime soon.[vii] 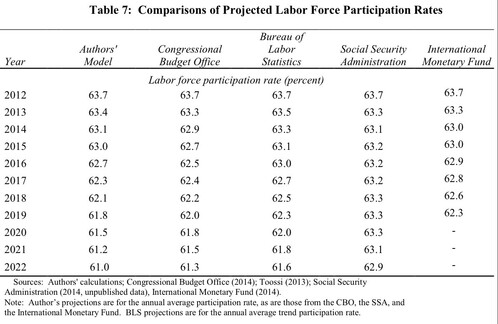 Perhaps the Fed will now just get on with it and give more immediacy to their rate increases. In some corners, this could unleash a tsunami of borrowing and buying before rates rise. The downside is that many market participants are still expecting "considerable" to be the new normal and that means mid-2015 for the first bump in rates.

If there is one word to watch during this week, it's "considerable".