Policy Driven Markets - Who's in Charge of Our Race to Zero!?

If there was any doubt about what has been sending equity prices higher, that doubt should be eliminated. It's clear to me global coordinated Fed/Central Bank policy is driving equity markets.

Last week the Federal Reserve met and released their expectation for interest rates for the remainder of 2016. According to the Fed's press release they only anticipate raising rates two times for the rest of the year. Fed Chair Janet Yellen said it "remained to be seen whether a recent firming in U.S. core inflation, which excludes volatile energy and food components, would be sustained." In fact, reviewing the "Dot Plot" (interest rate expectations per Fed Governor), you can see the trend is for lower longer. [i] [ii] 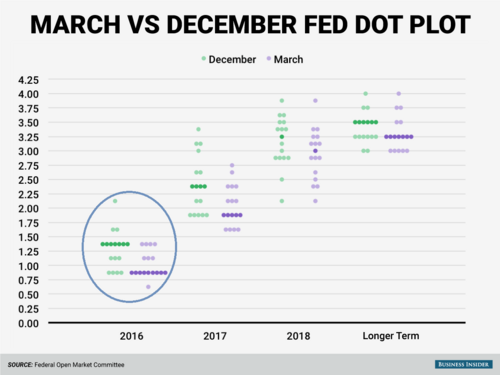 The result of the Fed's action has been to deliberately weaken the dollar which should improve large corporate earnings. They have succeeded. You can see in the chart below how the dollar has weakened against the Euro (blue line), Japanese Yen (yellow line), and Chinese Yuan (red line). [iii]

Now that five central banks have adopted negative interest rates as a form of currency manipulation it's hard to know who will win this war. Negative rates weaken a countries currency relative to ours which should help their exports. In turn, this might help their equity markets.

The central banks that have adopted negative interest rates are Japan, Sweden, Switzerland, the EU and Denmark. [iv]

So what does this rare and extraordinary coordinated move mean for investors, savers and markets? A simple list might be easiest:

1). Negative rates are a race to the bottom as central banks are all chasing the same thing; a deliberate method to weaken their currency and stimulate export demand. It's a global race and cooperation tends to diminish when there is competition. We could surely see more of this from these countries, and others that will may follow.

2). The concept is to make excess reserves being held by banks expensive to hold. Banks would have to pay their central bank to hold excess reserves, theoretically providing an incentive to lend money out cheaply. This would stimulate growth.

4). A global banking run could ensue if banks actually decided to charge for holding cash.

5). The Fed now has much more global room to cut rates bound to the zero interest rate policy, including going negative.

Ultimately we have seen a drop in dollar value based on the Fed's policy (blue line) and that has helped equities (red line) regain their footing in spite of the terrible earnings and margins. [v]

How do I know this is a policy driven market? Investors are ignoring fundamentals. For example, we see profit margins of many S&P 500 companies shrinking. [vi] 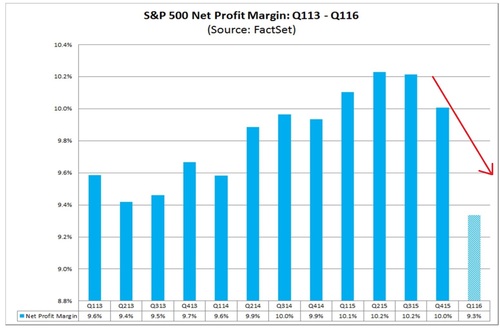 On the other hand, the weakening dollar should also do what the Fed intended it to do, correct the earnings hit's S&P 500 companies have experience as the dollar rallied the last several years.

“Currency headwinds increased quite substantially in 2015, negatively impacting both sales and earnings for 2015 by approximately 8%.” [vii]

“Foreign exchange adds another 7% or about $0.12 per share headwind in the back half.” [viii]

With a reversal in earnings of as much as 7-8%, we could be in for a nice surprise.

However, let's not forget in a Policy Driven Market other player’s reactions will matter. We do have an upper hand as we work our way through strong dollar comparison periods of the past to the weak dollar period we are experiencing now. [ix] 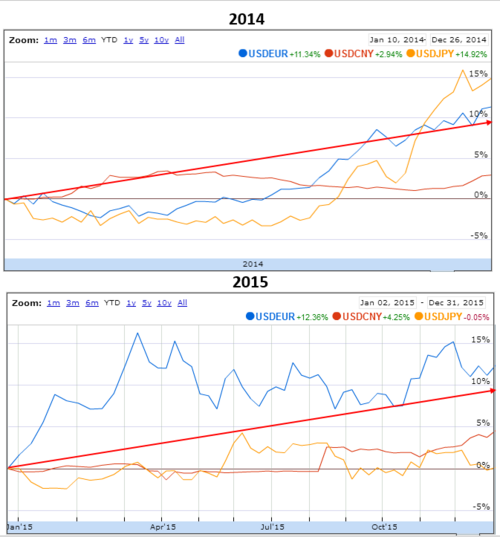 Our move when we rebalance will be adding a bit more duration to fixed income and focus on domestic equities like small and mid-cap stocks.

No one knows how the race to the back of the line will play out, but we do know we are in a policy-driven market controlled by central bankers.