As part of our on-going discussion on how Central Banks throughout the world are controlling valuations across multiple asset classes, it appears that the U.S. investor has acquiesced on the inevitable rate increase coming this June or, at the latest, July.

Janet Yellen said in a speech last Friday, "It’s appropriate…for the Fed to gradually and cautiously increase our overnight interest rate over time, and probably in the coming months such a move would be appropriate."

In fact, Fed Governors all week have signaled the possibility of an imminent rate increase, and the equity markets appear accepting of this fact. The S&P 500 was up 2.3% for the week.

“St. Louis Federal Reserve President James Bullard said on Monday global markets appear to be “well-prepared” for a summer interest rate hike from the Fed, although he did not specify a date for the policy move. ‘My sense is that markets are well-prepared for a possible rate increase globally, and that this is not too surprising given our liftoff from December and the policy of the committee which has been to try to normalize rates slowly and gradually over time,’ Bullard told a news conference after speaking at an academic conference in Seoul. - Forbes (ii)

In response to all of this “Fed Speak,” market’s reacted positively with an upward move of 2.3%.

It would also appear that the U.S. GDP is a bit stronger than initially reported. The Q1 revised GDP numbers suggest that the economy grew at 0.8%, up from a prior estimate of 0.5%. (iii) While this growth is anemic by any perspective, it's an improvement none-the-less. 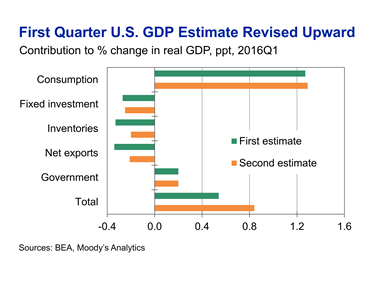 Consumption was stronger this past quarter, and both fixed investment and inventories were "less bad" than originally reported.

This data leaves us with the question of, “Why is GDP growth a good indicator of a stronger stock market?”

While this question has been, and currently is, widely disputed, here are some things to consider:

1). “When the S&P composite has grown at a slower rate than the U.S. economy, making it cheap, this has led to historical outperformance.” According to Econompicdata. (iv) 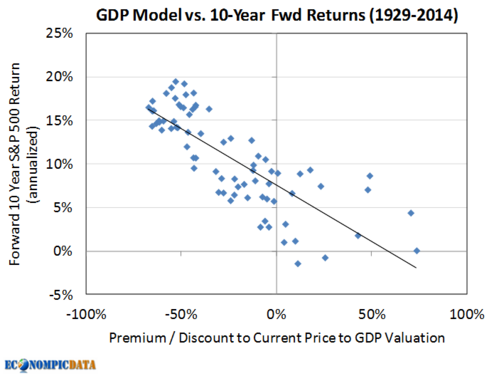 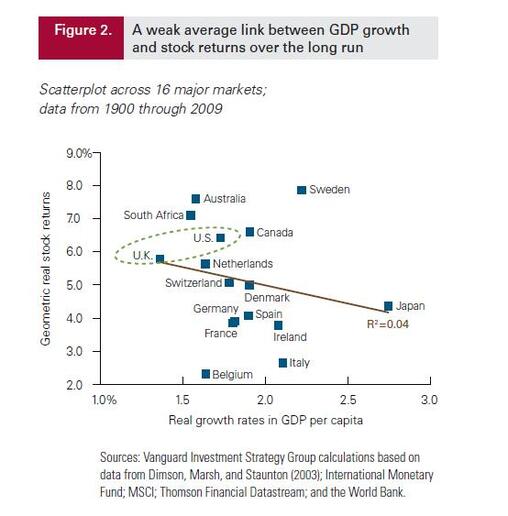 3). While there is certainly some modest correlation between long-term GDP growth and stock returns, there is a much stronger relationship in the short run. Since 1946, the correlation tops 60% in every time period, and in the most recent period from 2003 onwards, the correlation is a very impressive 84%. (vii)

What this tells us is that if you simply look at the current GDP growth and combined equity return expectations, you won’t get very far. But, if you’re able to predict the GDP growth 1-year ahead, it would be very beneficial and would give you some clue about where equities are heading.

Essentially, it pays to ‘guesstimate.’ 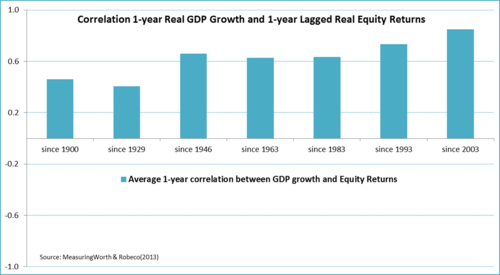 With the U.S. markets responding positively to last week's barrage of rate increase language, it’s conceivable that investors have accepted the possibility that a stronger economy could lead to a recovery in earnings.

Perhaps, our accepting the Central Banks dominance over our policy driven world, will end up leading to stronger returns, even if the rising rates suggests a stronger dollar which could possibly cause a drag on earnings.