The last couple of weeks of trade war rhetoric has turned decisively real.  Our view was, and still is, much of the trade war talk is overplayed.  However, we are now seeing the first phase of implementation. [i] 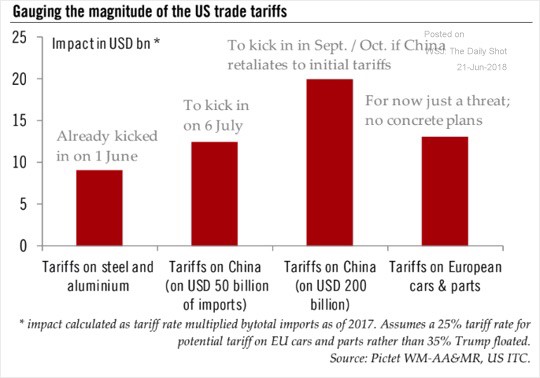 Consistent with the chart above, the United States has begun its first round of tariffs on China by imposing 25 percent duties on $34 billion of the following goods: [ii]

China has immediately retaliated by implementing its own 25 percent tariff on $34 billion worth of U.S. goods exported to China. [ii]

Economically speaking, however, these tariffs seem immaterial relative to the overall size of these two economies. [iii]

At this point, it may be worthwhile to explore and explain the actual economic impact of these tariffs.

The macro-picture is quite muted on this first round of tit-for-tat tariffs.  Just look at the U.S.-based import/export economics and notice that China is only 7.97 percent of the U.S. export market. [iv]

While it’s certainly no secret that tariffs may lead to higher prices for consumers as some or all of the tariff is passed onto them, it’s important to realize that tariffs can lead to higher wages domestically in the long-run.  The purpose of the tariff is to protect American business from unfair trade practices, such as cheaper labor overseas or less regulated foreign business environments—certainly, that is the case with China.

I would also like to point out that if a resolution is not achieved, we could see higher inflation within the U.S. but, much of that is likely to occur through higher wages paid to produce and sell goods here in the U.S. versus importing them from China.

As famed economist Michael Pettis put it, “. . .every single good against which tariffs are implemented will have its own supply and demand curves, making it impossible to make any general statement about how tariffs affect prices for consumers.” [v] 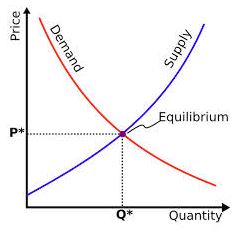 Based on the relationship of supply and demand in its simplest form, one possible outcome could be higher prices for consumers leading to decreases in demand.

Alternately, manufacturers could simply absorb the tariff and not raise prices for consumers, which would then arguably lead to a reduction in profits.

In some instances, however, higher prices may not affect demand at all, as there are certain items consumers are willing and able to pay a higher price for.

When you look at the immediate list of tariffed goods, highlighted earlier, you can get a real feel for what’s likely going to happen.

Notwithstanding the first round of tariffs’ being somewhat incidental, the real impact may be on our psychology.  Consumers currently support tariffs on China, according to a recent poll taken in Ohio.  Why Ohio?  It’s President Trump’s cornerstone state for his election. [vi]

However, if it affects their [consumers’] personal economics with rising prices, the question becomes a toss-up.  [vi]

Sentiment is also finding its way into Federal Reserve meeting minutes, as a concern for the overall economy.  Realize these are data provided to the Fed before any actual tariffs took place.

Here’s what was said: “Uncertainty and risks associated with trade policy had intensified. . .  Were concerned that such uncertainty and risks eventually could have negative effects on business sentiment and investment spending.”  Additionally, “contacts in some districts indicated that plans for capital spending had been scaled back or postponed as a result of uncertainty over trade policy.” [vii]

Based on all of this, it appears that the psychological aspect is beginning to influence consumer sentiment. 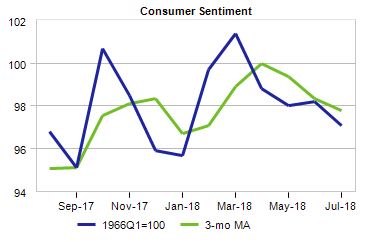 As you can see, consumer sentiment has reached the lowest level since January 2018.  [viii]

In my opinion, the investor class is still banking on President Trump to cut the best deals possible and not risk adversely affecting sentiment any further.  But he is clearly pushing toward the limits of his brinkmanship, especially when you consider his voter base at 50/50 on tariffs that may affect their lives.