If there was any question about what direction monetary policy (interest rates) are trending toward the Fed clearly laid those to rest:

Going forward, the economic outcomes that the Committee sees as most likely involve continuing gains in labor markets, supported by moderate growth that picks up over the next several quarters…If the incoming data are broadly consistent with this forecast, the Committee currently anticipates that it would be appropriate to moderate the monthly pace of purchases later this year; and if the subsequent data remain broadly aligned with our current expectations for the economy, we would continue to reduce the pace of purchases in measured steps through the first half of next year, ending purchases around midyear.

Going forward we can expect a return to rationality when it comes to both fiscal (government spending) and monetary policy. It's clear that fiscal policy will be a drag on the overall economy; however, expansionary tail winds look strong enough to overcome those challenges. We can see three strong economic signs:

1) In housing, existing home sales beat expectations for the month of May.[2]

2) Motor vehicle sales beat expectations in May, and have been steadily trending higher since the market bottom in March 2009.[3]

3) Debt service payments of both households and corporations are at multiyear lows, as we have written about previously. Corporations also continue to sit on large sums of cash, which can be deployed into the economy.

The Federal Reserve looks likely to want to raise rates as the economy expands through a slow withdrawal of bond purchases. Over the last 50 years, interest rates have averaged 6.68%, with a wide range of dispersion.[4] 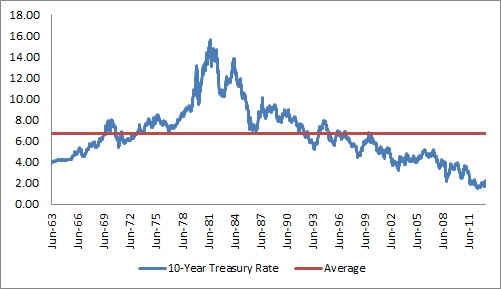 We have seen a steady increase in volatility in the last four weeks since monetary policy has been in doubt, as you can see below on a chart of the volatility index (also known as the “VIX”). 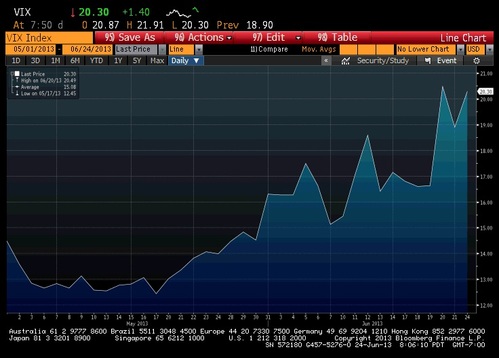 We have also seen a pullback in most sectors and asset classes. 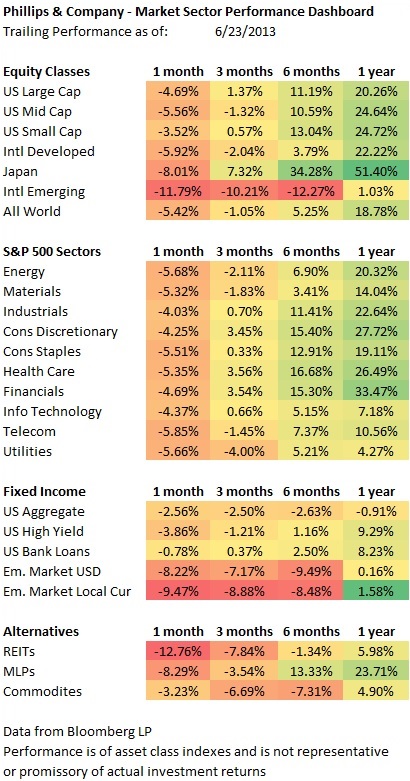 We have a long way to go to return to the mean, and plenty of opportunity to capture positive annualized returns.

One of two things are happening:

1) Capital market participants know something about the economy the Fed does not, and the economy’s underlying strength cannot withstand even slightly higher rates.

Either way, if the economy cools, the likelihood of Fed tightening diminishes, so stocks and bonds could react and potentially return to their highs. If the Fed does in fact tighten, it's now been anticipated by market participants, and stocks could rise on the outlook for a more normal functioning economy with a strong consumer, as well as corporate earnings growth recovering.

It would make sense to use these windows of opportunity to rebalance equity, adjust bond holdings, and prepare for a return to normal.