The US economy is strengthening by most economic accounts (see our post from last week). It's no wonder we hear lots of news about the Fed raising rates in September with almost certainty of seeing at least a rate increase in 2015. The probability of a rate increase by year end is 72% according the CME (Chicago Mercantile Exchange). [i] 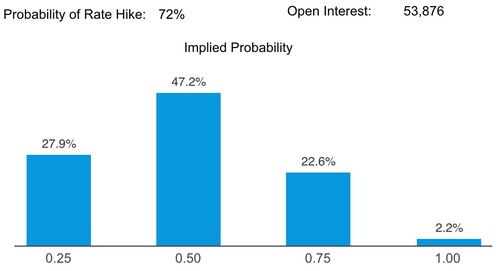 Not coincidentally, when the US economy is strengthening and rates go up if the rest of the world is not improving, the dollar strengthens. That's exactly what we have been living through for the last year or so. [ii]

We know all about the negative impact of a strong dollar on large US corporations that have global businesses; as you can read from our prior posts.

One big issue that needs attention is the impact of the Double Smack Down that rising rates and strong dollar have on emerging economies.

In the past (pre 2008 financial crisis) a strong dollar generally meant good exports for emerging market economies. That may indeed be the case in many instances but times have changed. One trend that goes widely under-discussed is the issuance of dollar-denominated debt issued by non-banks. In plain English, the trend of emerging market companies borrowing in US dollars from places other than banks (pension funds, mutual funds, private equity funds, other countries sovereign wealth funds, etc.) has been on the rise.

This trend was highlighted in a report issued this year by the Bank of International Settlements. You can read the full report here but I will attempt to summarize it in the simplest terms I can.

As US interest rates have been lower than emerging market interest rates for almost a decade, many companies in emerging economies have borrowed money in dollars from everyone but the banks. On the chart below you can see the debt owed to non-banks has grown by 50% and the share of bank loans (black line) has dropped from over 64% to about 52% today. [iii] 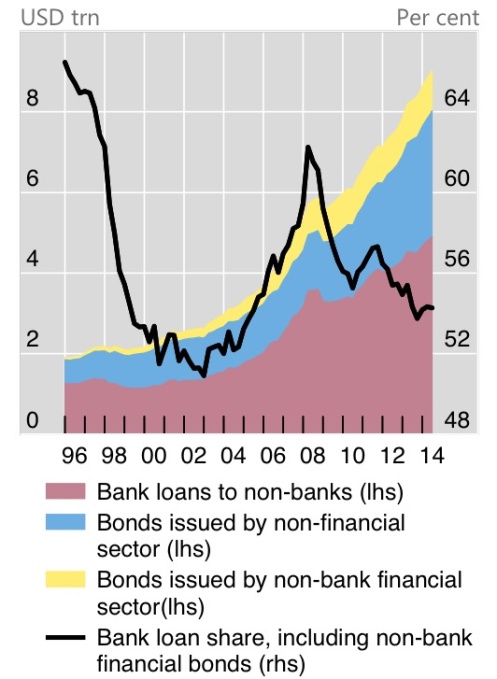 According to the Economist, the amount today now stands at $9 trillion lent to corporate borrowers and 50% of that debt lent from non-banks. [iv]

In practical terms, when you wade through the complexity of this trend, the challenge is simple. A company in Brazil borrows 1 million in US Dollars and then sells their goods and services in Brazilian Real. They must convert their local currency back to US Dollars to service their debt. When the dollar rises by 22%, they have to generate that much more in profits to pay their debt. That's not easy to do when emerging economies are showing weakness, especially in Brazil, Russia, and China.

Does this mean there will be a wide spread wave of defaults in emerging economies as the dollar continues to rise? Not likely. More probably, there will be weaker earnings for those companies that hold large dollar denominated debt which can translate into equity markets showing continued signs of weakness.

When rates rise (as expected sometime between September and year-end) in the US it also makes emerging market debt in US dollars less valuable and their price drops. After all, as an investor, when you can lend to US companies with less risk at increased rates, US corporate debt becomes more attractive than the debt of a foreign company. This in turn creates a movement of capital out of emerging economies back to the US which also puts stress on emerging companies.

"J.P. Morgan expects the default rate among emerging-market high-yield corporate issuers to reach 5.4% this year, up from 3.2% in 2014." US junk debt is expected to have default rates less than 2% according to Fitch. [v]

There is a silver lining for companies that rely on a heavy trade partnership with the United States or use American dollars as part of their operations. These companies will likely keep the debt to trade currency mismatch in check. What’s a currency mismatch? These are the foreign companies that borrow in dollars and sell their goods and services in dollars, then exchange their dollars for their native currency (US exports and dollar denominated countries).

While Chinese companies are large holders of dollar denominated debt, over 32.5% of their debt is traded in US Dollars (US and Hong Kong). [vi]

Again from the BIS report, the chart below shows the largest holders of dollar denominated non-bank debt.

Below is a list of China’s top 15 trade partners that imported the most Chinese shipments by dollar value during 2014. [vii]

What it means for us?

We will continue to examine our weightings not just in emerging markets but in US markets as we examine the consequences of the Double Smack Down with rising rates and a rising dollar.