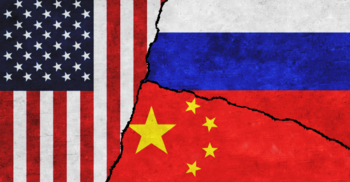 When we produced our video Coexisting as Superpowers with Jude Blanchette from the Center for Strategic and International Studies (CSIS) in May 2021, there was simply no way to predict the level of tension that would transpire between the United States and China.

We knew the United States would resist sharing global dominance with a rising country like China. However, the Russian invasion of Ukraine ushered in another layer of tension between these two superpowers. Capital sanctions imposed on Russia by the United States functioned as a tutorial for China – or so the United States government hoped.

The use of economic and capital controls is nothing new in the history of conflict. The United States used severely punitive tools to level with Russia. In the excellent book by Ray Dalio, The Changing World Order, you can see a summary of capital wars. You can also find his commentary at economicprinciples.org. 1

Realize this list was published well before the Russian invasion of Ukraine and the subsequent U.S.-led economic, capital, and resource sanctions.

In the spirit of “never waste a crisis,” the United States turned their focus on China to support these sanctions with Russia, their largest border neighbor. China has taken a “support Ukraine and neutral on Russia” approach in an effort to keep energy supplies flowing to China.

It’s one thing for the United States to block the less than $13 billion in Russian imports to the United States but, it is an entirely different issue for China to sanction Russia on their $57 billion in mostly energy. Energy is already a desperately needed resource in China and losing any supply invites instability for Chinese citizens. Similarly, Germany and India are unwilling to put energy sanctions on Russia. 2 3 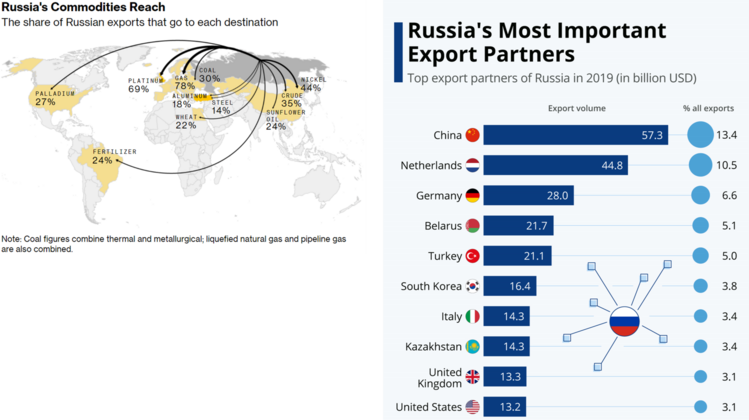 Most do not realize, according to Reuters, “Sberbank, Russia’s largest lender, and Gazprombank were not included [in sanctions] because they are the main channels for payments for Russian oil and gas, which EU countries are still buying despite the conflict in Ukraine.”

China’s strategically ambiguous approach with Russia has led to propaganda-like press releases as part of a pressure campaign. As investors, we needed to look deeper and provide clarity beyond this type of press clipping: 4 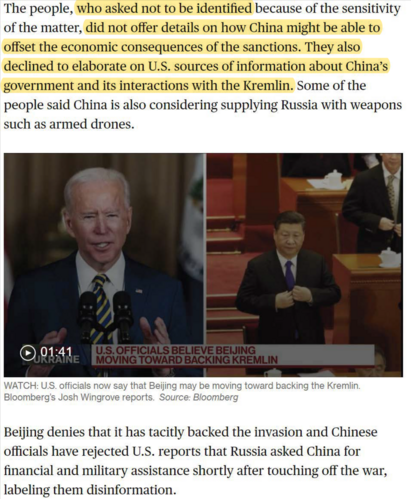 China responded with a nod to capital markets by finally addressing some outstanding issues between the Chinese government and the economy and capital markets. In summary, they:

Chinese markets responded accordingly with an epic rally not seen since mid-2020. 5

While this rally is a significant nod to the importance of capital markets in China, does it mean anything as it relates to sanctions that the United States might try to apply with China? Herein lies the challenge for both superpowers—and a small tutorial on unintended consequences. 6

As you can see from the map above, Egypt imports large amounts of wheat from Russia and Ukraine. While Russia and Ukraine represent tiny amounts of global GDP (red and pink), they punch well above their weight in energy, wheat, and maize. Ask the Egyptians if they like paying 50% higher prices for their bread as they are now. Going gluten-free is not high on their dietary list.

Now, overlay that example with possible U.S.-China sanctions. About 15% of all global exports come from China. Further, exports represent over 18% of China’s GDP. Sanctioning that amount of global trade would devastate China but, could also depress global growth, crush supply chains, and drive us into a hyper-inflationary environment never before seen. 7

Further, China is the largest trading partner with Europe. Europe-China trade represent 4% of China’s GDP and 3% of Europe’s GDP based upon total trade. Trade in these large markets is not something either can lose without causing irreparable harm to each other. 8 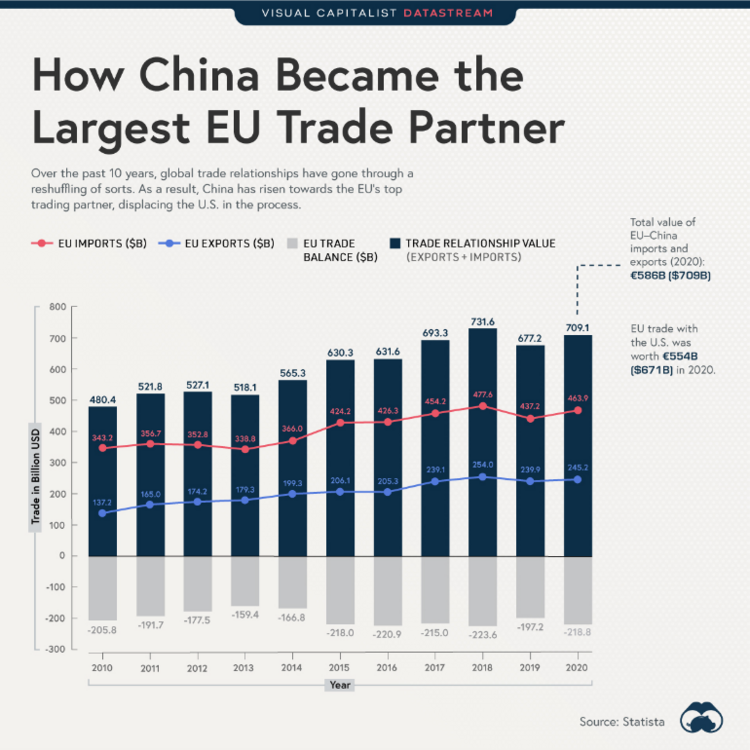 For these reasons, it is hard to apply Russia-style sanctions on China. Simultaneously, China does not want to lose hard fought and won trading relationships. Economic growth is foundational to the Communist Party of China’s efforts to create stability in their country.

Remember, members of the Communist Party of China are the minority. The party’s survival is predicated on popular notions of stability, sustainable growth, and common prosperity.

Sanctioning China in a way similar to Russia could be mutually assured economic destruction. That is why markets will discount the U.S. rhetoric soon enough and trade more on war milestones until we get back into earnings season.

We continue to keep the Ukrainian people and their struggle in our thoughts as we help you assess the various outcomes of this tragic invasion by President Putin.