With only ten companies left to report earnings in the S&P 500, it’s safe to say that it has been a productive earnings season for S&P 500 companies.  Thus far, companies in the index have reported an average increase in earnings of 9.43 percent. [i]

This surely harmonizes with the improvements in macroeconomic data that we have seen over the past year.

Unfortunately, as one season stops, the next begins.  With the conclusion of Q2 earnings season quickly approaching, regrettably, the political silly season also is about to commence with a couple of significant events the president and Congress will have to wrestle within a short time: the debt ceiling and the federal budget.

Congress has yet to pass a federal budget for the 2017–2018 fiscal year.  Both the House and the Senate passed the FY 2017 omnibus appropriations bills that fund the government for the rest of the fiscal year. [ii]  However, the U.S. government’s fiscal year ends in thirty-three days (September 30).  If a federal budget isn’t passed in time, a government shutdown will likely be unavoidable.  This is especially true if Congress and the president are steadfast on a budget resolution to negotiate a measly $1.6 billion for the border wall (approximately 0.04 percent of our $4 trillion federal budget). [iii]

If there is any silver lining to the constant tug-of-war between the major political parties, it would appear investors have long been sensitized to it. 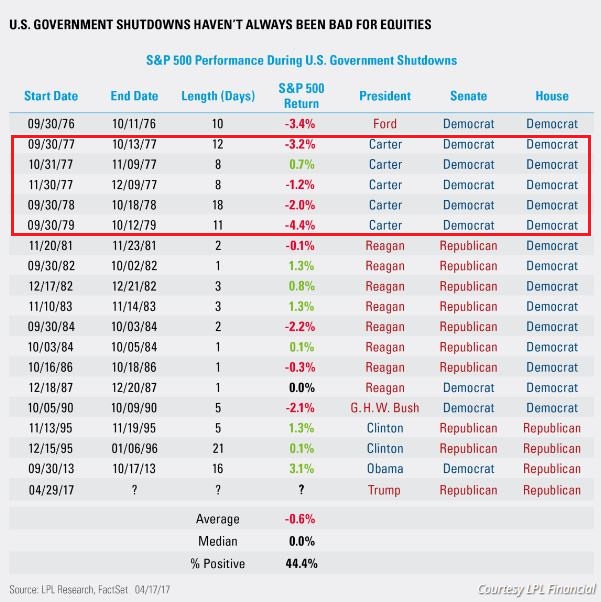 The average decline during a government shutdown has only been –0.06 percent. [iv]  Judging by these numbers, it would appear that investors simply don’t give much consideration to the largest institution in the world shutting down. However, there is one thing to note: When there has been a single party in control of the presidency, the Senate, and House, the impact of a government shutdown has been much greater.

During President Carter’s term, the only example since a federal budget became a statutory requirement, the average decline during a government shutdown was –2.02 percent. [iv] 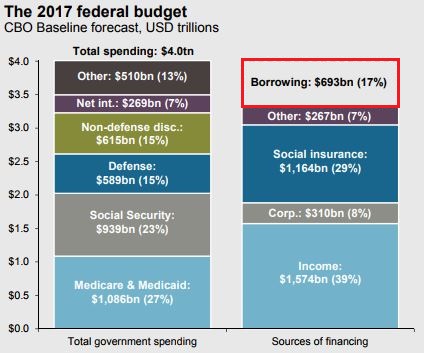 This year the U.S. government will need to borrow nearly $700 billion. [v]  To better put this into context, that amount is roughly 4.19 percent of our total GDP for FY 2016. [vi]  Because U.S. GDP is growing at roughly 2 percent per year, a potential debt crisis would be catastrophic.

You can clearly see that the United States has had routine increases to the federal debt level for many decades.  Only with the Obama–Boehner era did we see a tricky political negotiation around sequestration take place. [vii] 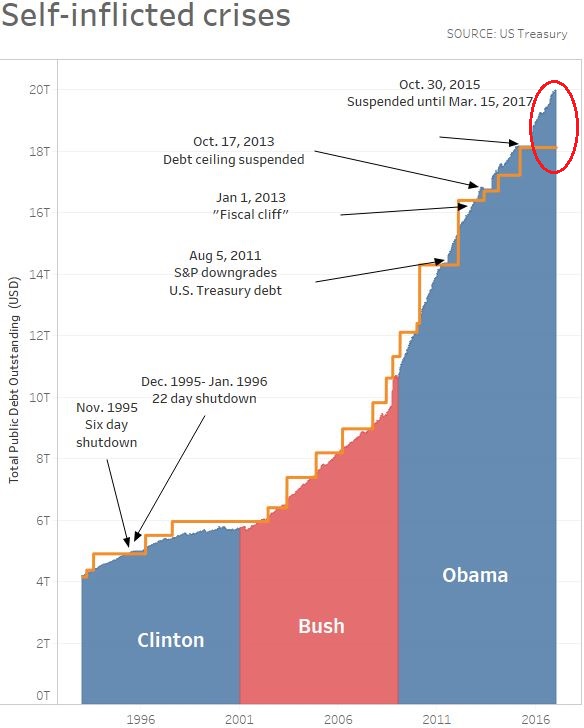 A government shutdown would be one thing, but failure to raise the debt limit could be unprecedented and catastrophic.  In fact, the credit rating agencies have clearly warned of a possible downgrade of the AAA credit rating the United States enjoys if the debt ceiling is not raised. [viii]

With the congressional calendar showing only seventeen days left to negotiate [ix], we should expect some serious market jitters until this political silly season resolves itself.  We’re counting on a clean debt ceiling increase and a showdown on government spending.

Last, our thoughts and prayers are with our colleagues and friends in the Gulf Coast.