Simple Is Not Easy

Friday was another strong confirmation that the U.S. consumer is heading in the right direction. The U.S. Department of Labor released their monthly jobs figures and they continued to show strength.

The U.S. Economy added 211,000 jobs in November along with strong revisions to prior reports in October and September adding an additional 35,000 jobs (October 298k and Sept 145k). According to our friends at Moody’s, "Job gains were well distributed across industries. The strongest gains were in consumer industries such as leisure/hospitality, which grew by 39,000; healthcare, which increased by 32,000; and retail trade, which rose by 31,000. Professional/business added a more disappointing 27,000 as temp help declined by 12,000. Goods producers also expanded thanks to the strong addition of 46,000 in construction, likely thanks to the unseasonably warm weather during the month. Mining lost 11,000 as companies adjust to persistently low oil prices. Manufacturing undid the pallid gain of 1,000 in October". [i]

We are finally seeing some consistent improvement in wages as the labor market begins to tighten. Average hourly earnings are up 2.3% from a year ago. [ii]

Meanwhile, there is some considerable hand wringing about the strength of the U.S. Economy, and with good reason. At this late stage of a recovery, a slowdown in manufacturing, a strong dollar driving an earnings recession, terrorist threats, etc. makes it hard to argue with some basic data.

When more people are working, wages improve! - It's basic supply and demand. Unless someone wants to argue about the laws of math, it's that simple.

So what do people do with improved wages. They spend more! - It's that simple.

While there are many studies that support this notion and I've attached one such complicated study as proof here (United States: Employment Situation). Or, you can simply review the below chart and draw some common sense conclusions. 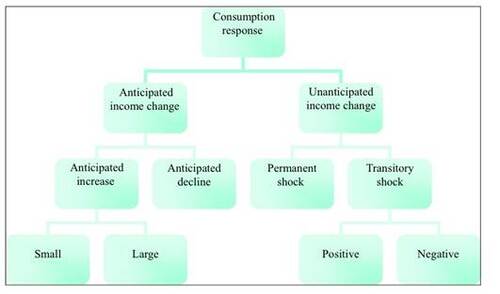 Here are some conclusions the folks at Stanford landed on from their study. [iii]

While complicated by PhD's and Economists, the notion that more jobs and higher wages allows consumers to purchase more of what they want and need is simple!

Further, lower income and lower education households that do not have access to credit markets tend to consume more when they make more. Simple!

Without the benefit of complicated studies by noted scholars, a few simple charts make the same point. [iv] 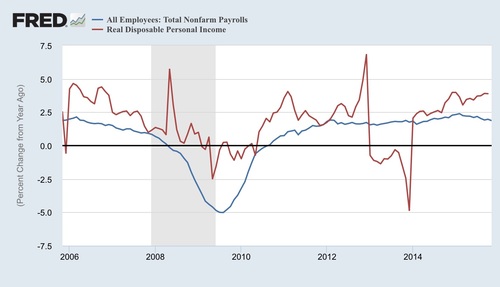 You can see the correlation between payroll (numbers of people working-blue line) with real disposable income (red line). We know more people are working and we know wages should rise consistent with past trends. 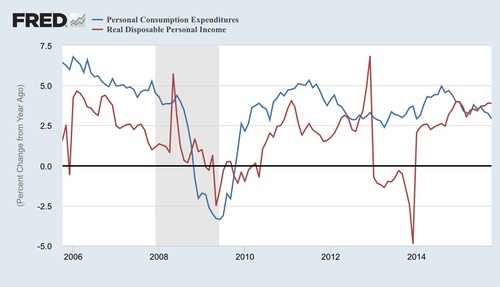 Again in red is income and blue is personal consumption. You can quickly see how they are highly correlated.

Let's not complicate the matter, this is simple math.

While we are in the midst of an earnings recession, the likelihood of slipping into an economic recession is minimal (note I did not say zero). Anything can happen and usually does when it comes to investing. However, the next few months look promising for consumption.