Earlier this summer, we celebrated Independence Day, commemorating both the adoption of the Declaration of Independence and the revolution that led to America achieving its independence. Today, there is another revolution going on in this country, one that could lead to independence of another kind. It centers on energy, specifically the shale deposits located across the central and northeast US, and has been referred to as The American Energy Revolution.[i] 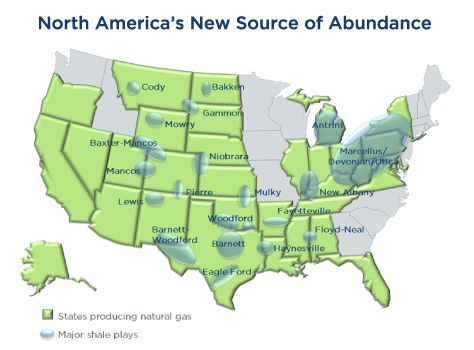 This is a well-earned title, as the rapid expansion in the US energy industry is driving growth that will likely have long-term impacts on the US economy and US energy self-sufficiency. The US became the world’s largest natural gas producer in 2010, and this year has overtaken Saudi Arabia to become the biggest oil producer as well.[ii]. Shale gas production is expected to grow significantly over the next 25 years, reaching 50% of US natural gas production by 2040.[iii] 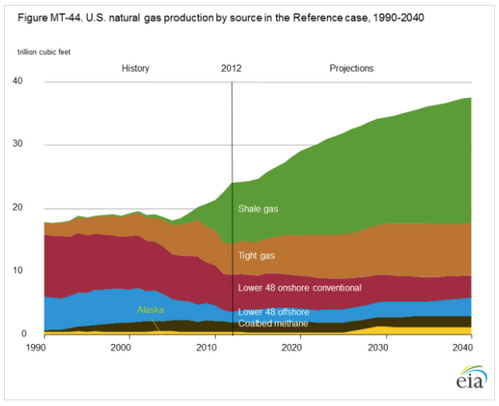 Growth in US energy production is projected to reduce our need to import energy, to stabilize market prices, and to lead to more energy exports.[iv] 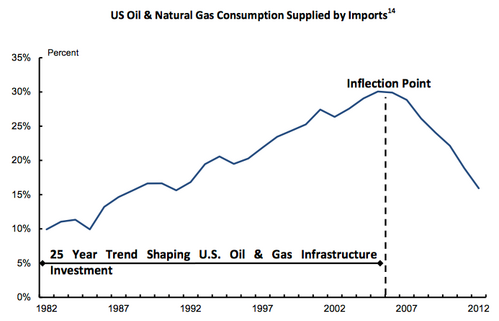 But for this to occur, additional infrastructure is required to gather, store, transport, and process all of these newfound resources. Previously, infrastructure was geared toward transporting energy into the U.S., not out of it.

Currently about 30% of the extracted natural gas is burned off due to a lack of infrastructure.[v] North Dakota recently implemented a gas capture mandate for all new oil and gas drilling permits to address this issue.[vi] This requirement has improved communications between drillers and midstream operators, allowing them to develop capital plans to meet future demands and provide investors with longer-range guidance.

The growth of shale gas production is projected to yield significant benefits to our economy over the next 25 years:[vii]

Demand for natural gas vehicles is also projected to rise. Citigroup estimates that 30% of the trucks on America’s highways will be burning natural gas by 2020. Companies including Procter & Gamble, UPS, and Waste Management already utilize natural-gas-powered vehicles, and Freightliner, a manufacturer of natural-gas-powered trucks, says that natural gas is one of its fastest-growing segments.[viii]

Lower electricity costs will benefit industrial firms. In its “Economic and Employment Contributions of Shale Gas in the United States” report, IHS Global estimated that by 2017 lower energy prices will result in a 2.9% increase in industrial production, and 4.7% by 2035.[ix] Some European companies are considering relocation of their manufacturing to the US, where energy costs are much lower than in Europe.[x] This could lead to more manufacturing jobs in the US.

Shale production has also led to a boom in natural gas liquids (NGLs), such as ethane and butane, which are petrochemical feedstock for the creation of everything from pharmaceuticals to plastics. With ethane prices 75% below oil-based alternatives, the chemical industry is investing $125 billion to construct or update chemical plants to use ethane and increase capacity.[xi] Increased demand for NGLs will drive more value to be extracted from natural gas production, instead of burning off NGLs with the natural gas.[xii] 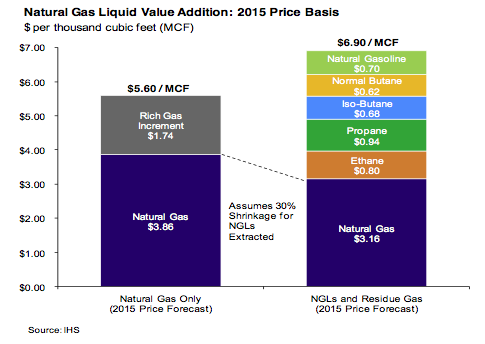 With production yielding so much supply, the US may become a net exporter of natural gas by 2020.[xiii] 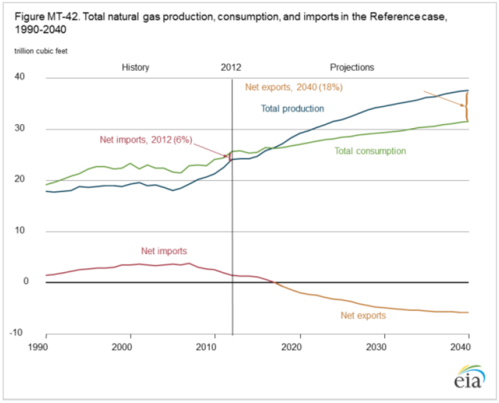 Global natural gas prices are higher than domestic prices, creating an opportunity for US-based energy companies to profit even after transportation and processing costs.[xiv] 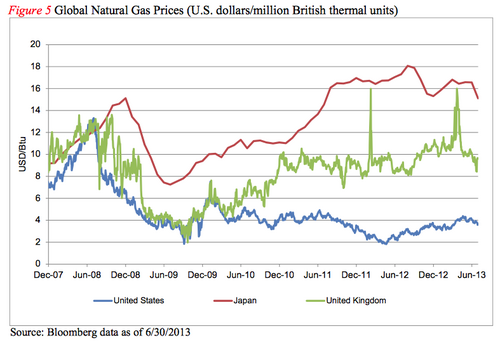 There are still crude oil export restrictions in place, a result of the Arab oil embargo. However, the US Commerce Department recently ended a four-decade ban on the export of ultra-light oil, and domestic energy companies are pushing for government to loosen other fuel export restrictions.[xv]

The energy boom driven by the drilling of shale deposits has been nothing short of a revolution. It will likely have a significant and enduring impact on our economy, may lead to US energy independence, and should create long-term investment opportunities in energy, industrials, and other sectors. Contact your advisor to discuss ways to participate in the American Energy Revolution.