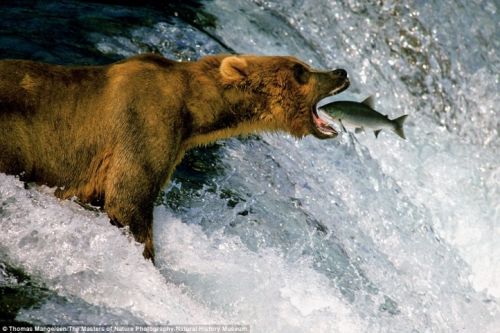 The Fed punted on its duty to normalize rates last week, consistent with investor's expectations. Unfortunately, in their statement,they added another layer of complexity to their already challenging mandate.

Prior to their announcement on Thursday, the Fed had a "dual mandate" of price stability and full employment. Basically, manage inflation while promoting the highest level of employment. Two noteworthy goals for any quasi-government organization.

Incredibly, the Fed is now concerned with a third key performance indicator: global growth. According to their official statement, when explaining their rationale for delaying a rate increase, they said:

"Consistent with its statutory mandate, the Committee seeks to foster maximum employment and price stability. Recent global economic and financial developments may restrain economic activity somewhat and are likely to put further downward pressure on inflation in the near term."

We're just not certain how much more downward pressure on inflation the U.S. economy can handle before we slip into a deflationary cycle. [i]

Certainly global growth should be and is a concern, specifically as it relates to a strengthening dollar. As the U.S. economy gets stronger and other countries' economic prospects weaken, the dollar strengthens. A strong dollar significantly impacts our export business and in turn corporate earnings. On a trade weighted basis the U.S. Dollar is a strong as it's been in the last 10 years. [ii]

There is no doubt in our mind that many countries are doing little to defend their currency especially as weak currencies promote greater exports. With several countries facing threats of deflation, anything to boost their prospects , especially a robust export market, is a welcome development. We are basically in a currency war without calling it that. Just take a look at currencies of the following countries: [iii-vii]

The new normal in global macroeconomic policy is to fight deflation at all costs. No one wants to spend 20 years in a Japanese deflationary case study, including us. Why fight deflation? It's simple; deflation brings with it lower standards of living, no wage growth, no reasonable earnings growth and a tendency to save vs. spend. All bad things for a consumption-driven economy and a democracy with elected officials.

After we have spent $4.5 trillion in expanding the Federal Reserve balance sheet to fight deflation one has to believe we will fight a deflationary spiral to the bitter end. That's exactly why the Fed punted, in our opinion. [viii]

What will the Fed do going forward if global economies continue to slow and we continue to expand? Will they fall into the currency war trap and raise rates only to strengthen the dollar further? Will they delay until next year to see more wage inflation before moving rates? Will they add more QE through new policy measures?

You can see from the "dot-chart" (showing each Federal Reserve members belief on where rates will be) they are pushing out increases and lowering their pace of increases. In fact, for the first time, there is one member suggesting a negative interest rate. [ix] 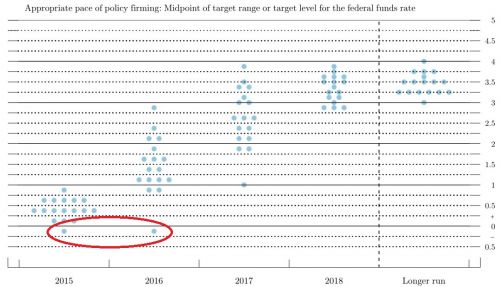 In their closing statement, the Fed in their statement created a trap for themselves by adding global growth and the need to manage U.S. Dollar strength.

If successful, and we wait for better global growth, we can expect to see better earnings from corporations that benefit from a weakening dollar. Our expectation is we should see that in Q4 of 2015 and Q1 2016.

Until better earnings emerge, we can continue to expect volatile markets debating the ability of the Fed to work its way out of its trap.