The Onion Has More Than One Layer: Crying or smiling will depend on your sensitivity

The Onion Has More Than One Layer: Crying or smiling will depend on your sensitivity
Weekly Market Commentary 6-3-13
Tim Phillips, CEO—Phillips & Company

As discussed in last week’s blog, policy errors are all around us. The US equity markets have pulled back 1.44% since May 22, when the Federal Reserve Chairman suggested they might ease off on buying bonds in the open market if the economy improves.[i]

While this is all true, what is also true is interest rates would have to rise to reflect the strength of our economy and act as a brake to inflation. Generally this is done through monetary policy set by the Federal Reserve Bank. As efficient as our capital markets are, participants (bond traders, mutual funds, pension plans, etc.) all anticipate changes well before the Fed can take action. In this case, rates rise before monetary policy can be enacted.

Take a look at the 10 year Treasury market that measures real interest rates (TIPS). It is important to note that what matters is real rates (those that adjust for inflation, as inflation erodes our buying power). 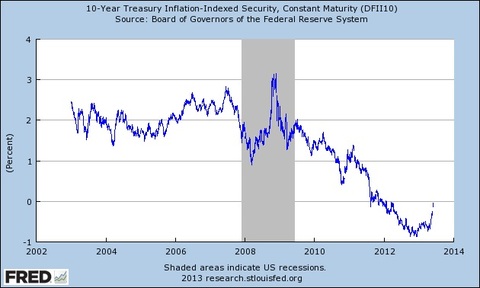 You can see that quite a spike recently occurred.

So back to the question, why would equities drop when the economy improves and real interest rates rise?

The simple answer is higher interest rates lead to the following, in theory: 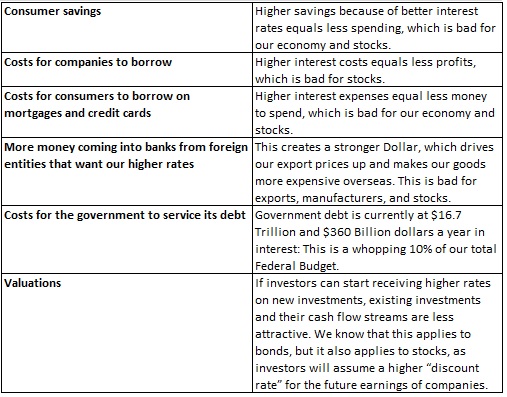 Note that I said all this could happen, in theory. In practicality, stocks tend to rise during rising rate environments up until a point: 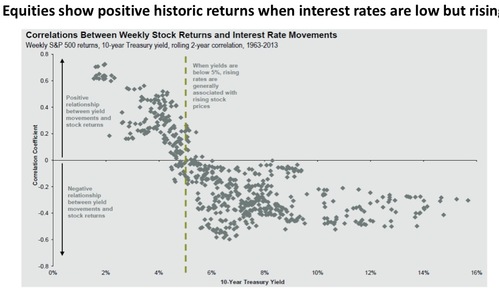 As you can see from the chart, stocks have historically risen with rates up until around a 5% rate on the 10 year Treasury.

Why? This is the speculative part. 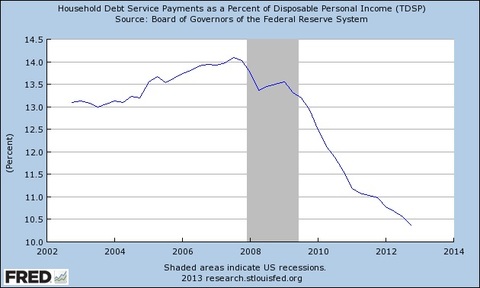 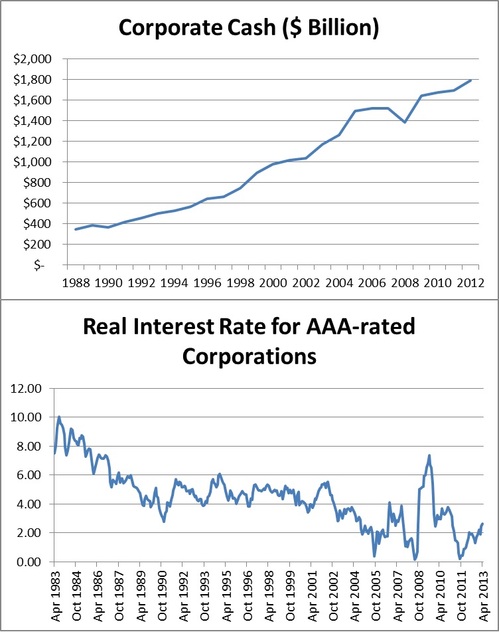 (Source: Federal Reserve. Real interest rates for AAA corporations based on AAA bond yields deflated against the year over year change in CPI).

My guess is market participants are once again only looking at the outer peel of the onion and reacting (selling) when it comes to stocks. While this time could be different, we might just have some time to go before rising rates impact our consumer and economy.

None of this diminishes the notion that bond durations should be lowered in portfolios and that requires some active management on your part as well as ours.

[ii] National debt figure and interest expense figure from TreasuryDirect.gov “Debt to the Penny” and “Interest Expense on the Debt Outstanding.” Interest expense as a percent of the budget is calculated as the 2012 interest expense divided by total actual FY 2012 federal outlays from the CBO.gov publication “CBO—The Budget and Economic Outlook: Fiscal Years 2013 to 2023.”