I’m visiting London this week, and ironically, of all things, it’s to get a “real” view on Emerging Markets (EM).  What some of you may not know is that many of the leading emerging market managers are located in this great city.  Not to digress, but I’d be foolish not to gain a better appreciation for where BREXIT stands while I’m here, given the fact that we are on record as stating that we don’t think it will occur.

As I’ve been walking around, it always amazes me that London attracts residents and visitors from across the globe.  I’ve seen people from the Middle East, Asia, West Africa, Russia, and specifically China.  You would think, by this alone, EM looks healthy.  However, keep in mind that looks can be deceiving. This simple observation alone is not investment worthy.  Let’s look at some real data.

First, investors are finally appreciating the strength of EM economies versus other investment choices.  It’s been many years since EM has led the pack in major asset class returns, even though they have had one of the strongest cumulative returns over time.  In fact, year-to-date, EM leads all other major asset classes with a return of 18.6 percent. [i] 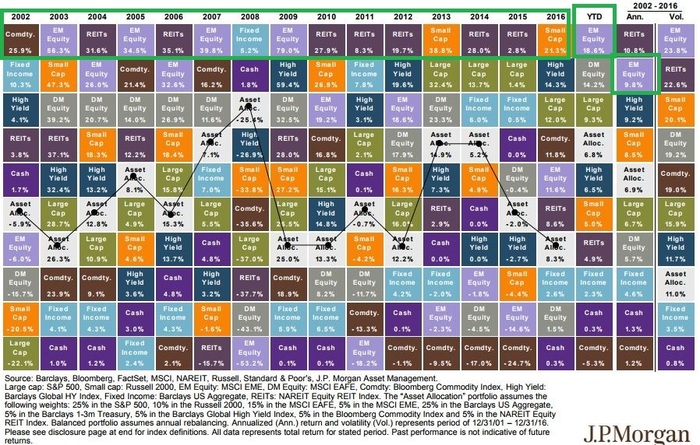 It’s not just investors who are appreciating the apparent strength in EM economies.  The Bank of International Settlements (BIS), which is also known as the Central Bankers Bank, addressed noteworthy data about this in their recent annual report. [ii] 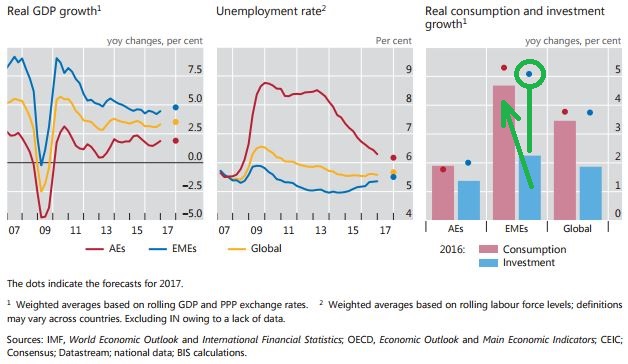 You can see that the GDP in Emerging Market Economies (EMEs) is recovering nicely with their employment picture continuing to look strong.  Most noteworthy in the charts above is the shift from investment to consumption within the EMEs.  While forecasters (seen as the dots on the above chart) continue to anticipate that these economies will be driven by investment projects, such as roads, bridges, utilities, etc., it appears that EMEs have also made a substantial shift toward consumption.  [ii]

This certainly supports what I am seeing here in London; an economy largely driven by consumption supported by a significant number of EM visitors.

This consumption-focused shift appears to be translating into a recovery of profits.  As we have opined in past commentaries, U.S. companies are in the midst of improving profitability, and now their EM brethren companies are joining in that recovery. 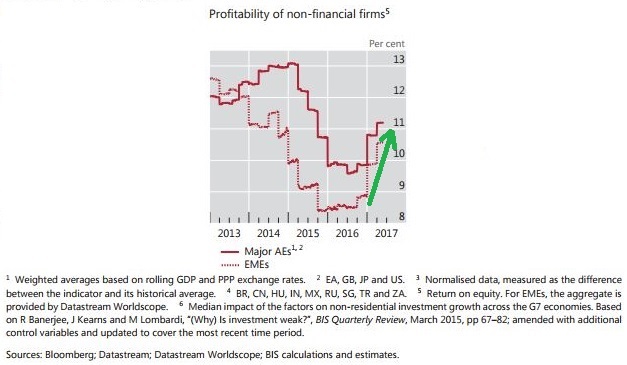 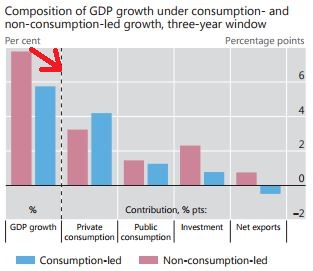 This consumption-led explosion is best represented by the Chinese consumer.  Over the last ten years, household debt in China relative to its GDP has exploded from less than 20 percent to almost 45 percent.  Generally, this can lead to borrowers becoming reckless and overleveraged.  If there were to be a housing correction in China, or some other event that would cause the inability to service that debt, this could be catastrophic for EMEs, consumers, and investors.  [iii]

It would appear that the EME narrative in the world is moving toward a consumption-based economic model versus a centrally controlled planned investment by governments.  In turn, this may produce less overall GDP growth, a shift in the control of the economy from its government to its citizens, and risks of political chaos that will likely increase.

Perhaps what I am seeing in London is the epicenter of the liberalization of EME and the rise of the global consumer.  This is probably why we have maintained reasonable exposure to EM in most of our allocations.