Trying Not To Lose A Decade

This week the European Central Bank President (Draghi) signaled what we had been anticipating for quite some time. He stated at a banking conference on Friday, the ECB would “do what we must to raise inflation and inflation expectations as fast as possible.”[i] 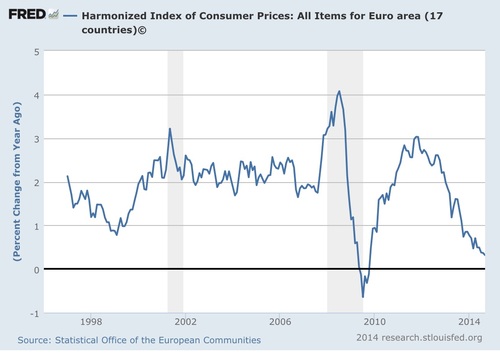 It's no wonder when looking at how very low inflation is in Europe. [ii]
Following those comments, but most likely uncoordinated, the Chinese Central Bank or Peoples Bank of China cut their interest rate. Mostly driven by concerns the country won't meet its 7.5% growth target. This is their first rate cut since July 2012. [iii]

Global slowing is confirmed by US based companies and their earnings. You can see from the image, US companies with more sales in the US are posting much higher earnings and revenue growth. [iv] 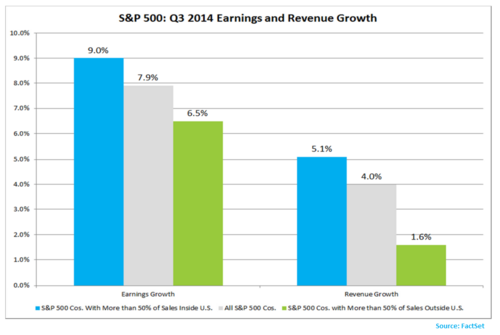 Much of that international slowdown is from Europe and can be seen in some of the Dow 30 component companies.
With exception of one of our local companies in Oregon (Nike), European revenue growth by some of our largest US companies was either very anemic or declined in the 3rd Quarter. [v] 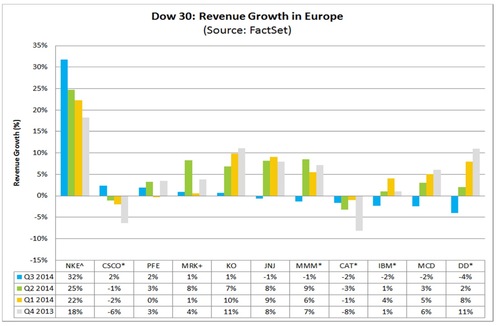 One reason world markets reacted very favorably to these Central Bank activities is the favorable perception the US Central Bank has garnered from their adventurous ways in the form of Quantitative Easing. The thinking goes something like "the US Economy looks stronger than global economies because the Federal Reserve cut rates and bought massive quantities of bonds." Only time will tell whether that is true or not.

The bottom line is there are very few economic tools once an economy slips in to a deflationary cycle. The cycle is simply hard to break.

Because deflation is hard on equity investors, companies, and wages, central banks will do just about everything they can to avoid a Japanese “lost decade”.

The Japanese economy went through a very prolonged period of deflation from 1991 - 2013 and their equity markets dropped 55.9% during that same period. [vi, vii]

It's no wonder bankers would rather spend to avoid a global lost decade. Perhaps that may provide for a payoff on allocations with international developed and emerging economy components as we currently have.