Volatile, Uncertain, Complex, and Ambiguous seem to be the essence of our current times. Our last blog suggested President Biden’s $3.5 trillion domestic agenda could be in jeopardy if volatility in Afghanistan persisted. After the tragic deaths of 13 brave young American military personnel and scores of Afghans, it is anyone’s guess what’s next for this administration.

Will Americans hold their government accountable?

If so, how? Change in control come 2022? Or resistance to public policy proposals? Something else?

The chaos of President Biden’s domestic agenda is going to be on full display this coming month. His tax and spending proposal will follow the contours of Congress and their timeline is as follows:

I made reference in last week’s blog to the potential weakness in President Biden’s agenda prior to the tragic loss of life in Kabul. Moderate Democratic Senators Kyrsten Sinema (AZ) and Joe Manchin (WV) represent states with large veteran populations that will be reeling from outrage of this tragic loss. There are no economic or political gains that can ever be the moral equivalent to the loss of life like that of Sgt. Nicole Gee, shown below holding an Afghan baby and proclaiming she “loved her job.” [i] 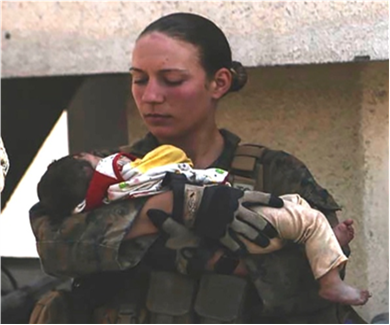 It’s uncertain how Americans will hold their government accountable for this organizational failure.

The current spending proposal calls for spending across a wide swath of our society. [ii] 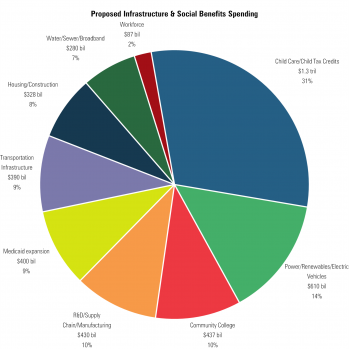 The plan to pay for all of this is as follows. [iii] 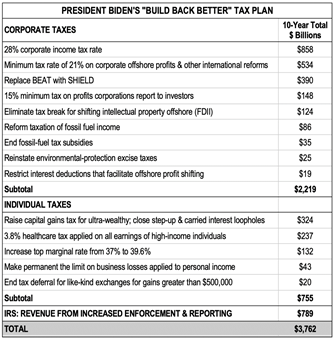 Senators Manchin and Sinema have already said “no” to these amounts mostly driven by the conservative core of their states. [iv]

“I have...made clear that while I will support beginning this process, I do not support a bill that costs $3.5 trillion.”
Senator Kyrsten Sinema

“Given the current state of the economic recovery, it is simply irresponsible to continue spending at levels more suited to respond to a Great Depression or Great Recession – not an economy that is on the verge of overheating.”
Senator Joe Manchin

In all likelihood, the tax proposals will be watered down or eliminated. Perhaps a corporate tax rate at 25% or a lowering of the base on the top tax bracket to $350,000 with a smaller increase in rate. Step up in basis is too complex to administer and generates something of a “food fight” to get done. The losers in all of this might be the large pharmaceutical companies that will have to negotiate prices with the federal government.

To illustrate the impact this could have, we recently looked at five major pharmaceutical companies and assessed which of each company’s top 5 drugs were most likely to be impacted by a scenario where drug prices are reduced by 30% and estimate that it would result in ~9.1% revenue downside on average. 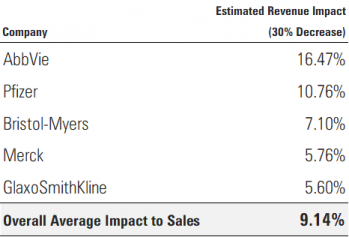 One thing is certain: Lower interest rates have made it easy for the Federal government to spend and borrow. The percent of federal spending apportioned to interest has been declining. [v] 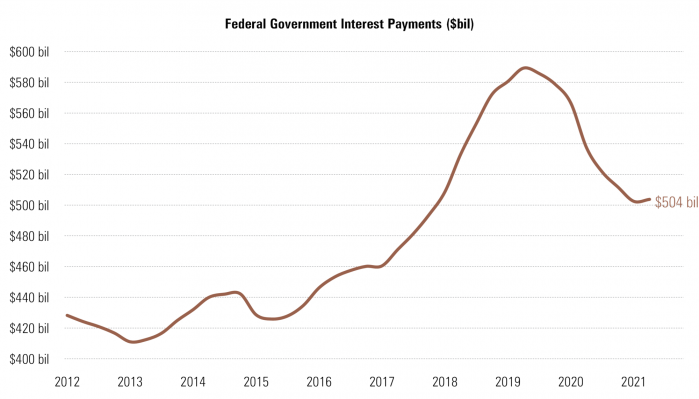 To add to the uncertainty, Chairman Powell signaled the beginning of the end for monetary pandemic relief to begin in the coming months. [vi]

“My view is that the ‘substantial further progress’ test has been met for inflation. There has also been clear progress toward maximum employment. At the FOMC's recent July meeting, I was of the view, as were most participants, that if the economy evolved broadly as anticipated, it could be appropriate to start reducing the pace of asset purchases this year and the intervening month has brought more progress.”
Fed Chairman Jerome Powell, August 27th, 2021

The Federal Reserve will begin to taper their purchases of both mortgage-backed securities (MBS) and treasuries. Currently, they are purchasing $120 billion a month– $40 billion in MBS and $80 billion in Treasuries.

It was interesting to note Fed Chair Powell made a hard distinction between tapering purchases and raising interest rates. Tapering does not mean rising rates.

“The timing and pace of the coming reduction in asset purchases will not be intended to carry a direct signal regarding the timing of interest rate liftoff, for which we have articulated a different and substantially more stringent test.”
Fed Chairman Jerome Powell, August 27th, 2021

It’s ambiguous to think that winding down massive purchases of these assets won’t lead to higher rates. When you look at the 10-year treasury yield at the start of 2020 and the onset of the global COVID outbreak, rates were 59 bps higher. [vii] 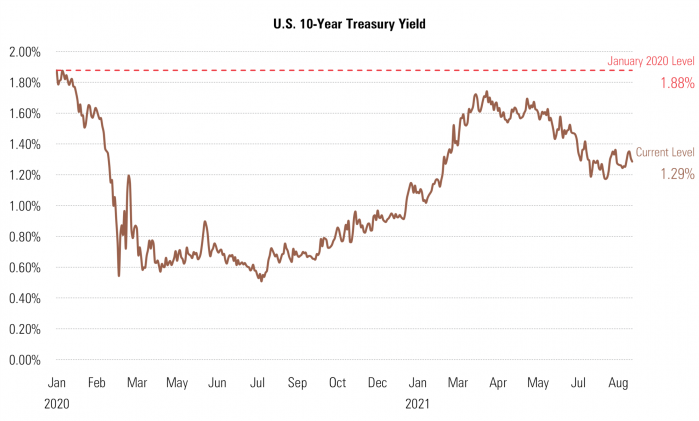 Equally important are residential mortgages—if we roll the 30-year average mortgage rate back to pre-COVID, that is 73 bps higher than current rates. [viii] 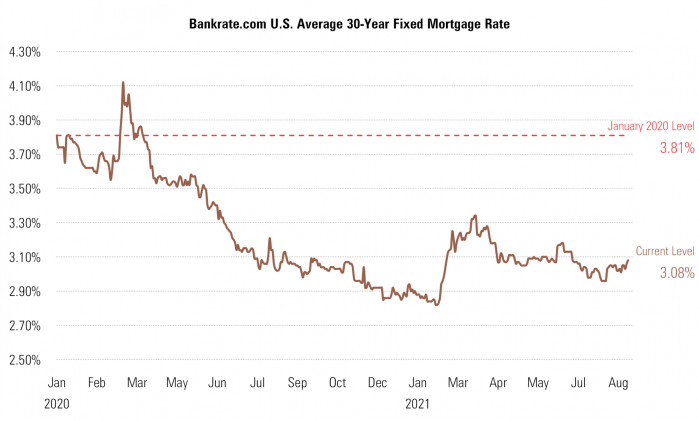 Since our clients are some of the biggest and best homebuilders in our region, I am well-versed in what higher rates mean. Let me walk you through an example.

You can see the percent of income would need to rise by 3.5% to make up for the higher mortgage rates and maintain affordability. Perhaps there will be a slowdown in housing in the coming year. “Uncertain” is an understatement in this regard.

The good news is that personal income is on the rise as of the latest report. [ix] 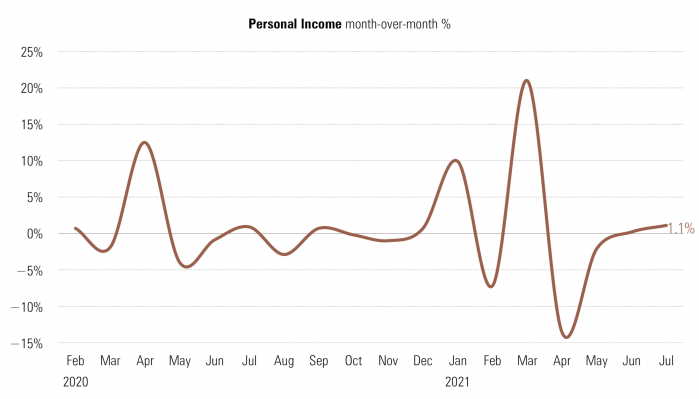 Transfer payments were a large contributor to that increase driven mostly by the 2nd advance payment of the Child Tax Credit. Rising incomes are not all government transfers. Disposable personal income was up 1.1%, the most since March. [ix] 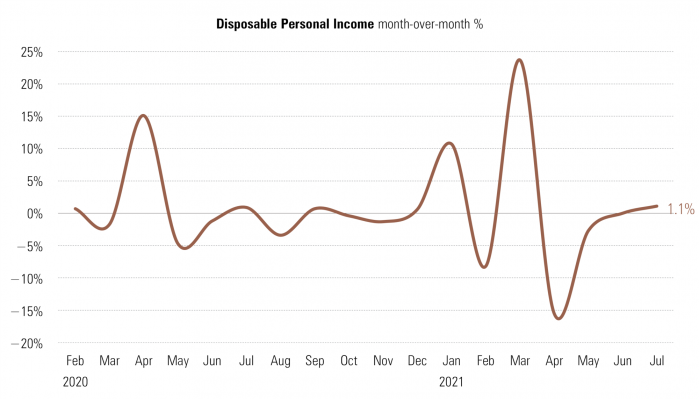 Adjusting for inflation still leaves real disposable personal income up for the first time in a long time. This is all good for consumption.

We have been tracking the spend down of personal savings and expected that to continue to provide even more fuel to the consumption fire. It would appear a few more logs were thrown on to the fire in the latest report on savings. The saving rate jumped back up to 9.6% from 8.8%, likely reflecting the Delta variant creating a small drag in spending and transfer payments being tucked away for future spending. [ix] 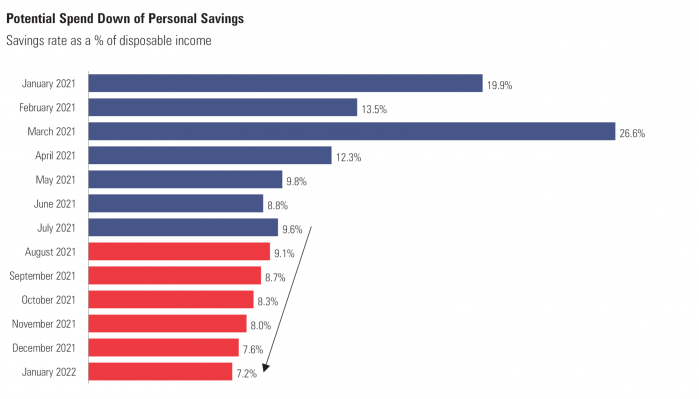 Foreign chaos, interest rate ambiguity, and political/legislative uncertainty will lead to some real-world volatility over the next 45 days. My recommendation is to look past all of this and stay focused on long-term planning and your need to drawdown your investments in the short run.