The U.K.'s referendum, which was a non-binding advisory vote, to leave the EU caught everyone by surprise. The surprise was that the decision to leave the European Union is so detrimental to the citizens of Great Britain. Why would they vote to leave?

The famed author T.S Elliot once wrote, "We had the experience and missed the meaning." while sitting in a bomb shelter in World War II London. [i]

I’ll try to add some context to what this perplexing outcome means for you, the investor. From a U.S. economic perspective, the United Kingdom is not that significant a trading partner, relative to our total GDP of over $17 trillion. In fact, the U.K. only accounts for less than 4% of global GDP. [ii] [iii] 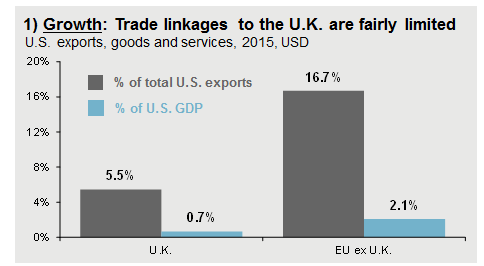 It's no wonder President Obama said the British will have to wait their turn when it comes to specific trade negotiations. It's also not surprising that the Chancellor of Germany Angela Merkel suggested the Brits be allowed more time to make a smooth transition, as the Germans sell more to the British than any other country. [iv]

Note this is not a currency breakup. The U.K. essentially voted to leave a trade pact with the E.U. The effect of the U.K. leaving the E.U. is far less significant than if a member with a shared currency were to leave. Also, the breakup is still far from certain. The British still have two years, once Article 50 of the Treaty of Lisbon is invoked, to negotiate trade treaties and smooth the transition to a fully independent U.K. As the vote was non-binding, the U.K. may still yet remain part of the E.U., and never invoke Article 50.

Yes, the British face a credit downgrade by ratings agencies as Moody's quickly put them on a negative watch list and has already lost its top AAA rating from ratings agency S&P following the Brexit vote. [v]

It's also true the uncertainty involved with their vote and perhaps pending withdrawal from the largest aggregated economy in the world (1. European Union, 2. United States, 3. China) could cause them to slip into a recession (though fears of any Brexit contagion may be overhyped at this point). [vi] 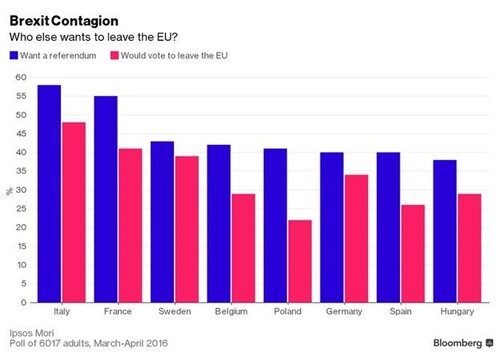 Moody’s analytics now expects the Brexit vote will result in a much weaker U.K. economy, estimating the nation’s GDP will be approximately 1% lower a year from now than it would have been otherwise, and more than 3% lower five years from now. [vii]

However, the economic impact experienced by the U.K. might feel muted by the fact that they, like us, live in a policy driven world. They have their own central bank (Bank of England) that has already said,

" A few months ago, the Bank judged that the risks around the referendum were the most significant, near-term domestic risks to financial stability. To mitigate them, the Bank of England has put in place extensive contingency plans. These begin with ensuring that the core of our financial system is well-capitalized, liquid and strong. This resilience is backed up by the Bank of England's liquidity facilities in sterling and foreign currencies. All these resources will support orderly market functioning in the face of any short-term volatility." [viii]

As we have been suggesting for the last 6 months, Central Bankers are controlling the world’s financial markets through extraordinary financial engineering. Since the 2008 Financial Crisis, Central Banks have:

So what are the real consequences of Thursday’s referendum to leave the E.U.?

The bottom line is no one knows what drove seemingly smart people in Britain to vote against their self-interests.

As investors, we know the U.S. is coming into a critical quarter when expectations for earnings growth need to materialize.

We know a stronger dollar vs the British Pound will not have a significant impact on corporate earnings in the U.S.

We know that as the world’s third largest exporter, Germany will enjoy keeping the Euro cheap relative to the dollar to boost their exports.

We know traditional institutions such as Banks, Central Banks, traditional political parties, and Governments in the developed world are under attack for a do nothing approach to what woes the world faces.

And on Thursday, we also learned if given the chance people can vote to hurt themselves out of anger, despair, or plain old frustration.

The answers will come in time but the opportunities will present themselves much sooner for those invested in the U.S. equity markets.

Investors should expect more volatility as we approach prime time for large U.S. corporations to show they can indeed drive earnings growth in a global environment that is full of surprises.