Wake Up - It's the Economy

By the time you get this we will likely be hours away from another government shutdown. Although we humans suffer from "present bias" (events that happen now seem more important than those in the distant past), government shutdowns have been more common than we may think:

Take a look at the last 17 shutdowns and the market reaction [i]: 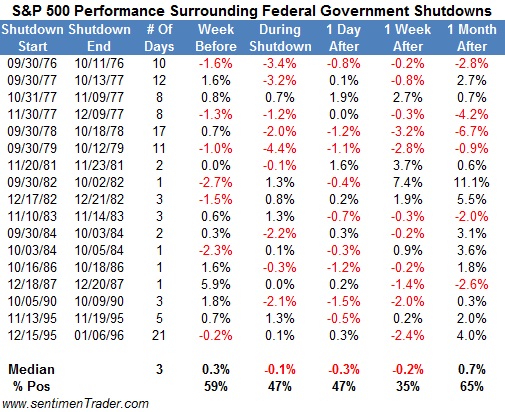 As we have written in a past post, what dictates market reaction is the broader economy and earnings, rather than a temporary action or crisis from the government. Make no mistake: a prolonged shutdown could have a dramatic impact on our economy. Moody’s economist Mark Zandi estimates a shutdown of more than a few weeks would cut GDP by 1.4 points off of a 2.5% growth rate in Q4 (over 50%). But, if it’s a few days to a week, he forecasts almost no impact.[iii]

To give some perspective to the wider picture, the US consumer is in as strong a shape as they have been since the Great Recession began. Savings rates have stabilized at 4.6% [iv], and US wealth is now back to peak levels. [v] 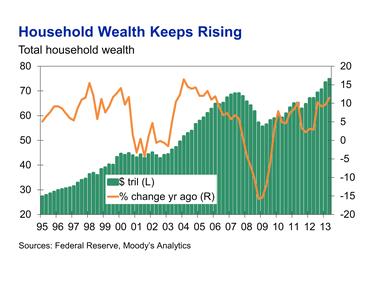 While total wealth has recovered, when you factor in inflation and population growth it's not all that impressive. That being said, we are in pretty good shape relative to where we were in 2009.

The timing of all the policy uncertainty with a recovering economy and consumer would be comical if it weren't so serious. That's why I believe we might avoid a shutdown entirely or have a very limited shutdown. The new normal might just be policy uncertainty. As you can see, we are not experiencing as high a measure of uncertainty as we have in the past as it relates to government shutdowns. (This index measure news articles from 4300 sources that mention policy related uncertainty items).[vi] 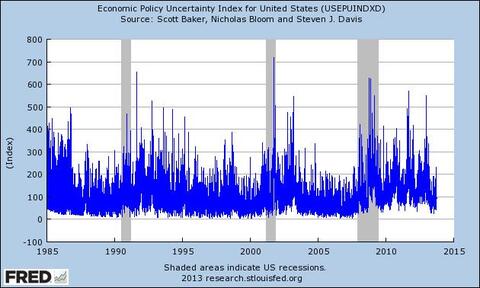 It would appear a limited shutdown might provide for an excellent buying opportunity. Unfortunately, what's next for policy uncertainty rests in on a debt ceiling extension. This matter is far more serious, and any default or credit downgrade associated with our debt would be devastating.

We continue to tilt toward some caution and quality while we try to find a bottom in policy uncertainty and await indications of earnings for Q3.

[i] "Government Shutdowns—Not much to worry about”, SentimenTrader, April 7, 2011,