“I think our dollar is getting too strong, and partially that’s my fault because people have confidence in me.”
– President Donald Trump, April 14, 2017 [i]

Regardless of whether I believe that politics had any hand in the strengthening and weakening of the U.S. dollar, I am going to leave the political commentary aside and instead, focus on what’s recently been happening with the dollar.

Since the start of 2017, the U.S. dollar has been on a considerable slide, and when measured against a basket of other major currencies, you can see the weakness I am talking about [ii].

In fact, the dollar has hit levels we have not seen since early 2016 and very early 2015.  There is no dispute that a weaker U.S. dollar will help make U.S. manufactured goods cheaper overseas.  Compared with this time last year when the dollar was strengthening, a weaker dollar should increase profits for U.S. companies in the quarters ahead.

After all, approximately 30 percent of all sales by S&P 500 companies come from overseas exposure [iii]. 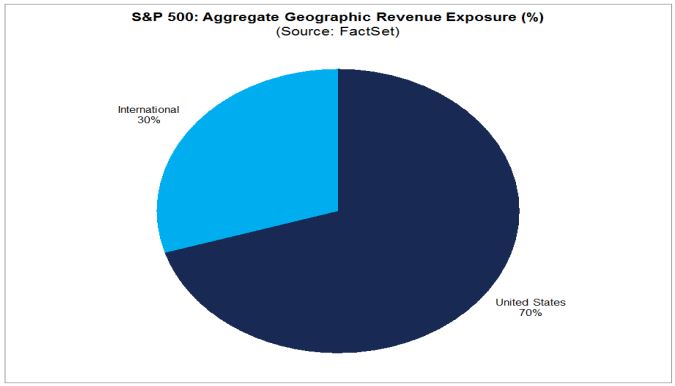 For those companies doing business overseas, this further supports the stronger earnings growth we have seen in Q2 2017 when compared to those doing business only domestically [iii]. 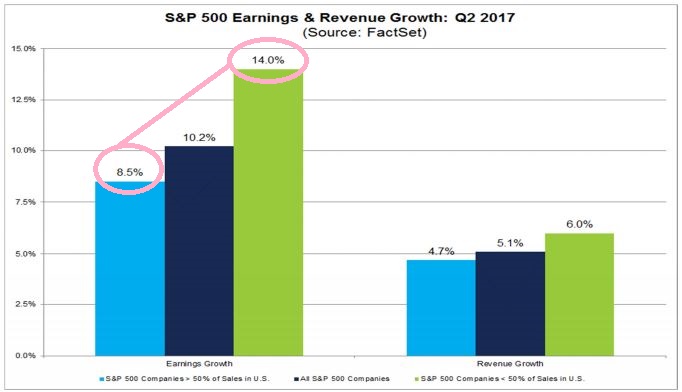 It is not completely far-fetched that some would say the strength and weakness of the U.S. dollar directly reflect the country's confidence in President Trump.  But I believe this is a far too simplistic way of evaluating things.

Instead, I believe that the dollar’s weakness is reflective of weak inflation and thus, the Fed’s potential inability to further raise rates in 2017.

As you can see, across all the measures, inflation has turned down another notch [iv]. 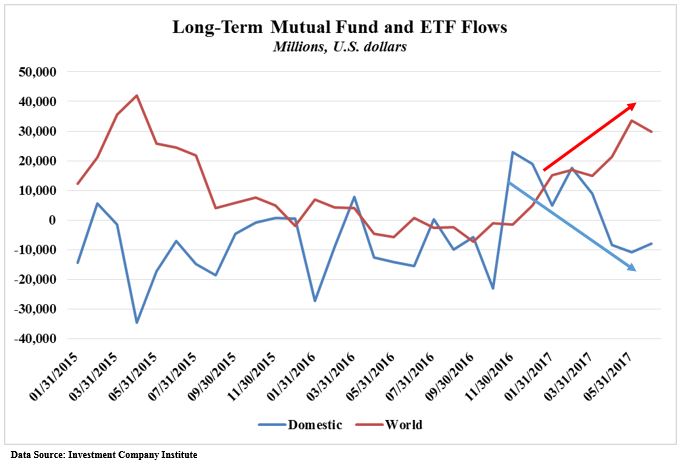 Generally speaking, a weak dollar should convince investors to shift from foreign companies to U.S. companies.  But not this time.  As you can see, the flow is just the opposite [v].

Again, we believe this is a reflection of the Fed being pinned down by weak inflation readings while other central banks consider tightening monetary policy.

“There is no longer that sense of urgency in taking further actions while maintaining the accommodative monetary policy stance including the forward guidance.” – European Central Bank President, Mario Draghi [vi]

In summary, continued weakness in the U.S. dollar and tepid inflation are likely to produce modest GDP growth for the remainder of 2017.  We also believe that the current dollar action is likely to extend strength within international markets.