Before I get into my market commentary, I want to take a minute to extend a thank you to all of our veterans and active duty military personnel for all of the grueling hard work and sacrifices that they make for our country. We hope everyone deployed overseas comes home safe and can enjoy a little down time for the holidays.

Investing after the election

It seems that the investor class is taking the election results very hard. As Phillips and Company serves literally thousands of business owners and employees with defined contribution accounts, we have a decent view on attitudes. It's clear that investors are worried and perhaps fearful.

The election results could have a significant impact on personal income taxes, as well as taxes on dividends and interest. After all, it was perfectly clear that taxes were going to change for upper income earners no matter who won.

Before we all jump off the emotional cliff, let's just step back for a moment and evaluate a few of issues.

What's in your control - Expectations

You can see nothing political drives your expected rate of return, and whether or not you meet that expectation is another matter.

How serious are we about debt?

Second, while the consensus opinion might suggest tax rates are going up, I want to advance another perspective. It's possible rates might not change at all. In fact, we might see rates lowered.

“Let's extend middle class tax cuts right now. Let's do that right now. That one step would give millions of families, 98% of Americans, 97% of small businesses, the certainty that they need going into the new year.” –President Barack Obama on November 10.[2]

You can see both party leaders are thinking along the same lines. Perhaps deductions might be trimmed, but actual rates could be lower. Or, perhaps spending cuts might not happen as fast in order to keep tax rates on dividends low. We will see how serious politicians are about cutting spending in the face of certain higher taxes.

No one questions the fact that for our country to resolve our fiscal issues, it's not income or debt alone that will do it. Growth is really the only big solution. Clinton era tax rates worked in the face of a massive technology boom not seen since the transcontinental railroad, with an average GDP growth rate of 3.8% from 1993 to 2000.[4] 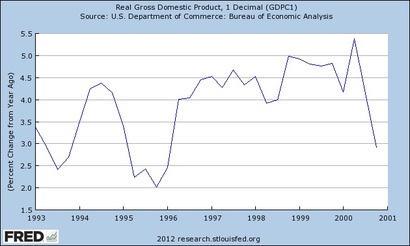 It's also clear we are not facing the growth rates Clinton era economies experienced. I would not be surprised to see much less rhetoric about spending cuts, in exchange for some compromise on tax rates and deduction caps.

Third, I often site John Maynard Keynes when he says: “It would be foolish, in forming our expectations, to attach great weight to matters which are very uncertain.” Keynes wrote in his book The General Theory of Employment, Interest and Money about the importance of investors having certainty of what kind of fiscal policy to expect.

If we get some answers from Washington about policy—regardless of the answer, but as long as it clears up uncertainty and confusion—I think a couple of things happen:

A) US corporations that are sitting on historic levels of corporate cash would begin to invest in expansion. Corporations are currently sitting on $392 billion in cash, and the average over the last 20 years is only $193 billion. If that extra $199 billion gets deployed, that could add 1.3% to GDP. 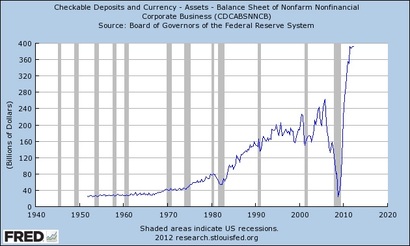 B) Banks are sitting on $1.4 trillion in funds above and beyond their reserve requirements. Normally, banks keep as little excess reserves as possible, as banks want to make money by lending. 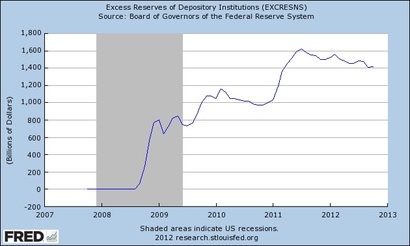 Clearly, the supply of loanable funds is ample. The problem at the moment is a lack of demand, and lack of banks willing to take risk.

Keep in mind that banks can lend at 10x the amount of reserves, so a $1.4 trillion reserve amount could lead to $14 trillion in lending over the years to come. I would not want to bet too much against the American Consumer to tap into this source of "consumption cash" when they get the urge. Just take a simple formula of as little as $500 billion in additional loans for consumption or capital investment. With current US GDP at $15.1 trillion, an extra $500 billion would add 3.3% in GDP growth.

A special note on inflation control:

One common concern I hear is all of this liquidity can cause inflation. On its own, there is no question it can. However, a little known piece of the Emergency Economic Stabilization Act of 2008 (the TARP “bank bailout” law) now allows the Federal Reserve to pay interest on bank deposits held at the Fed.

What this means is that the Fed can get another measure of control over the flow of this capital. For example, if the Fed wants to hit the brakes on inflation, they could raise the interest rates on deposits held at the Fed, and banks will be more likely to park their cash, rather than making loans. With a natural productive capacity of 3% growth a year without too much inflation, we now have a standard. The boom years of the 1990s gave us 3.8% annual GDP growth with an average inflation of only 2.6%--in line with historical averages.[5]

While I have been warning against some massive volatility in weeks to come, there are just too many strong factors that suggest a run to cover approach. Unless you can lower your lifestyle in the future and change your expected rate of return you need, allocation will matter the most in meeting your lifestyle and planning needs. Jumping off the cliff is not a strategy.