Corporate profits as a percentage of GDP are at all-time highs, and according to the Federal Reserve, these profits currently represent approximately 11% of GDP. That partially explains why equity markets continue to push higher despite the slow global growth. 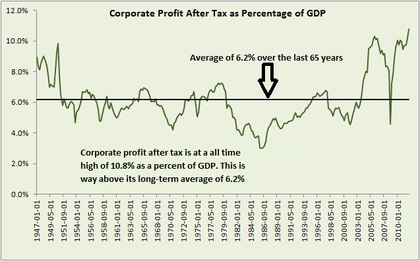 On an absolute basis, corporate profits are also at an all-time high, according to the Federal Reserve. 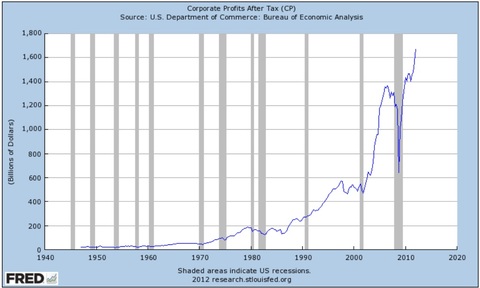 These record corporate profits have enabled US companies to hoard a record amount of cash on their balance sheets. Reports vary on the exact number but it’s safe to say it’s somewhere north of 2 trillion dollars according to the Federal Reserve.

On the opposite side of the prosperity coin is the US worker. In spite of what we hear from politicians about who is making more money and who is not, it appears most households are making less than they have in the past. 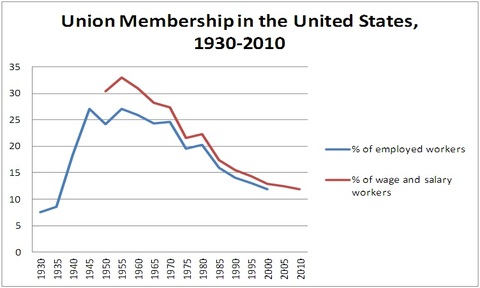 The good news in all of this is, at some point, companies should start to invest their cash. If companies invested just half of their cash into our economy in the form of new plants, equipment, technology, and hiring more people, then the US GDP could grow by over 6%!

The trick is getting companies to invest that money. To me it appears there is a showdown between policy makers and corporations with the worker (read: US Consumer) caught in the middle. In order to get companies to invest and consumers to spend, policy makers need to produce a stable tax policy. Don't take my word for it, Keynes wrote about this in his book on "The General Theory of Employment, Interest Rate and Money” published in 1936.

Companies and people are so closely tied together—more so now than in the past. Without the willingness of companies to invest, regrettably, I think the US Consumer won't have sustained, consistent, and stable income to consume at the level we have grown accustomed to.

With any sign of stable policy, companies might just start to spend and hire. The challenge is to be invested well ahead of these policy changes because much of those market gains can occur in brief bursts.

The painful part of this showdown is it will likely create some significant volatility and test your patience and nerves as an investor.