Last week the Federal Reserve announced additional steps to try to support a stronger economic recovery according to their press release on September 13, 2012. Here's what they are going to do:

"If the outlook for the labor market does not improve substantially, the Committee will continue its purchases of agency mortgage-backed securities, undertake additional asset purchases, and employ its other policy tools as appropriate until such improvement is achieved in a context of price stability"

What was a bit more concerning in the statement was their comment regarding inflation:

"The Committee also anticipates that inflation over the medium term likely would run at or below its 2 percent objective." 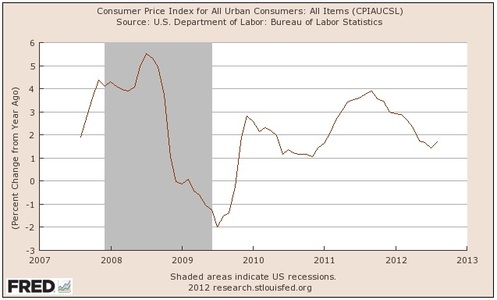 Now that the Fed has pushed most of us to take more risk to generate limited returns, we should see inflation in asset prices—specifically in homes and more immediately in stocks. I think Howard Marks said it best in his latest letter to his investors:

Today’s low interest rates, engineered by the central banks, mean that investors are consigned to doing business in a low-return world. Interest rates near zero on T-bills, and yields of 1-3% on Treasury notes and bonds, set the base from which the prospective returns on investments entailing risk are established. And because that floor is so low today, even with healthy risk premiums added, the absolute prospective return on many investments isn’t nearly what it is was in the past.

Unfortunately we still have a fiscal policy to contend with in the form of a Fiscal Cliff.

I am reading Bob Woodward's new book, "The Price of Politics". It's a revealing narrative on how our political leaders were negotiating fiscal policy. I ran across a statement that caused some lost sleep. This was a quote from the President during his negotiations on that last extension of the Bush Era tax package:

"I’m drawing a line in the sand after this,” Obama promised, trying to rally the group. This was his final compromise on taxes. “Let’s protect the fragile economy. Come the next round when these things expire, I’m holding. Not happening again.”

It's clear that the Fiscal Cliff will not be an easy negotiation and compromise looks less likely based upon what was reported in this book.

The Federal Reserve is throwing the kitchen sink at the economy making investors take on additional risk in order to achieve a similar level of returns; however, the uncertainty surrounding the upcoming elections and fiscal policy could still hold returns back despite taking on additional risk.