Leave it to Lincoln to come up with another great quip that is very fitting to our current monetary agenda. Allegedly, Lincoln used this phrase when he was referring to the ill-fated General Ambrose Burnside, shortly after a military defeat and subsequent sacking of said general by Lincoln.

Before we get to the Defeat Snatching component of my assessment, let's review the Jaws of Victory side of the equation.

There are some fairly positive signs bubbling up in our economy. It's almost hard to imagine saying that in the wake of so much uncertainty.

In fact, a host of economic indicators are pointing in a positive direction. If you take a look at the chart below you can see key economic factors, like employment, are improving. What's ironic is this is a chart from our friends at the ECRI (Economic Cycle Research Institute), the guys that are calling for a recession. While they may still be right, the current data is not trending their way. 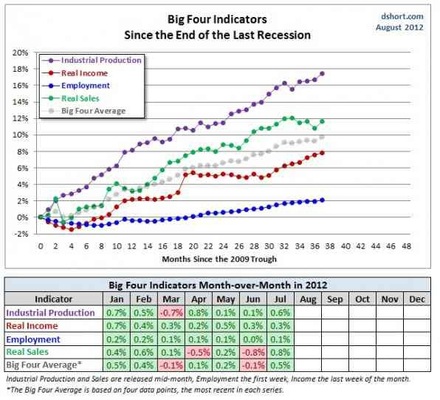 Last Friday, The Federal Reserve concluded their seminal "Jackson Hole" meeting with Chairman Bernanke delivering his much anticipated closing remarks. He strongly suggested non-traditional monetary tools were effective and would be strongly considered in the future.

“the costs of nontraditional policies, when considered carefully, appear manageable, implying that we should not rule out the further use of such policies if economic conditions”

One interesting and perhaps overlooked event during the meeting was a presentation by noted Stanford economist Edward P. Lazear. He wrote a paper that suggested our current unemployment issues were not structural but cyclical. He went on to suggest much of our high unemployment might be strongly explained by "mismatch" in the labor force both within industries and between industries. Basically, people need time to get retrained and relocated from shrinking skill sets and industries to those growing and needed. One compelling point he made was:

10.0% by October of 2009. Thus, in a little over two years, unemployment rates went up by over5 ½ percentage points. Most structural changes do not occur so rapidly."

The bottom line is the Federal Reserve is not mandated to handle structural employment problems but cyclical ones. So, Lazear essentially provided the rationalization for further monetary intervention.

Ultimately though: if the fundamental economic data improves and we get a Federal Reserve induced sell off, then snatching defeat from the jaws of victory could be a great buying opportunity.