The definition of divergence:

On the one hand, we have the Dow Jones Industrial Average approaching five year highs:

On the other hand, we have the Bureau of Labor Statistics saying 44 out of the 50 states are reporting higher unemployment in July, including New York and New Jersey at unemployment peaks not seen since the beginning of the recession. 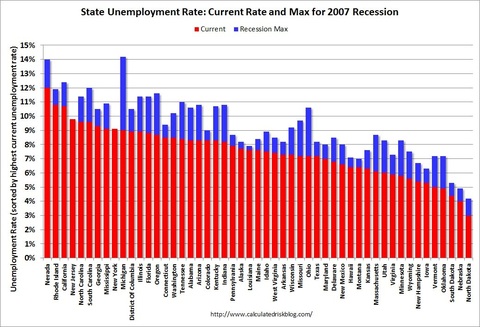 In my opinion they are both right, for now. For the last two years, economic data has been weak in August, coincidently right before the Federal Reserve’s annual meeting in Jackson Hole, Wyoming.

Now cut to the current environment:

Given this weak economic data, the market participants have been trained to anticipate action from the Federal Reserve providing two decent rallies in the equity markets.

As economic data began to show weakness in June, the markets began to rally on hopes of additional action from the Federal Reserve. Since June 1, the S&P 500 is up 11.50% according to Bloomberg.

Unfortunately, when market participants anticipate an event, usually there is a hard sell off once the event occurs. We have all seen this with earnings announcements and I believe we could see this with another dose of quantitative easing. Studies show actual events are less fulfilling than the anticipation of those events. I believe an economist won a Nobel Prize for a theory on this (more on him in a future post).

Needless to say diverging perspectives can create winners and losers.