What Does It All Mean

I just concluded a round of quarterly client meetings where I presented our Q4 2017 Look Ahead.  You should have received this during the first week of October.  However, if you didn’t, I encourage you to review it by clicking the link above.

During the course of my quarterly meetings, several unexpected questions that I was asked regarding rising default rates of auto loans stood out.  [ii] 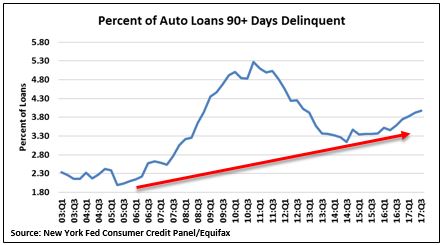 They were simple questions, yet complex in their underlying meaning, for which I had no immediate answer.

What does it all mean?

What does it mean for banks?

What does it mean for consumers?

What does it mean when subprime auto loan delinquencies are rising in the background of the macroeconomy?

Frankly, I missed the meaning.  However, I am grateful for having engaged clients who thought to ask.  So here is my answer.

To start, most of the defaults are occurring in the subprime auto loan market.  These loans are made from banks and auto finance companies to borrowers with a credit rating below 620, as evidenced by their FICO score. [i] 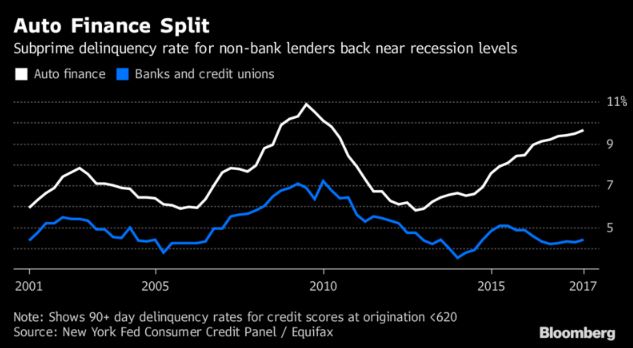 In our Q4 2017 Look Ahead we did not distinguish the difference between bank loans and auto finance loans.  You can see from the above chart that rising delinquency rates are predominantly seen in auto finance companies compared to banks and credit unions. [i] Perhaps banks have learned their lesson from subprime mortgages and the Great Financial Crisis.

To add some context to the issue, the Federal Reserve Bank of New York released its Q3 2017 Household Debt and Credit report detailing some interesting facts regarding auto loans: [ii]

When you look at the profile of sub-prime borrowers (FICO <620), you get a pretty clear picture of who they are and what they do for a living.  [iii]  In general, they are young, hardworking people, making an income that is approximately 50 percent of the median family household income: $59,039 per year, according to the Federal Reserve Bank of St. Louis.  [iv]

According to the Bureau of Labor Statistics, 45.1 percent of employed persons between the ages of 16–34 are employed in retail, healthcare support, and leisure and hospitality.  On average, these workers are earning 36.8 percent below the median weekly earnings for all individual workers. [v] [vi] 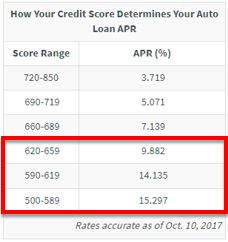 Despite these alarming statistics, our opinion is that the macroeconomic impact is not likely to lead itself to a broad-based banking crisis, which is good.  However, when you consider that 23 million consumers hold subprime auto loans, of which 70 percent are issued by auto finance companies, and those companies are experiencing a steady increase in their default rate–currently at 9.7 percent–some trouble appears. [i] [ii]

Here are a couple of takeaways worth noting:

Although the overall outcome is not likely to derail the U.S. economy, it is certainly enough of a drag to contribute to a slowdown, which still may be several quarters off.  However, passing a tax package would likely alleviate some of the stress these workers are facing. We just hope this doesn’t get overshadowed by a “do nothing” Congress.