Will the Bad Weather Last?

The US economy added the fewest number of jobs in December (74,000) since January 2011. [i] Much of the blame for the terrible jobs report was the weather. I know the weather was horrific in parts of the country. We have a national clientele and plenty of anecdotal evidence. According to Phil Izzo and Kathleen Madigan from the Wall Street Journal, some 273,000 people were not at work in December due to weather. [ii] 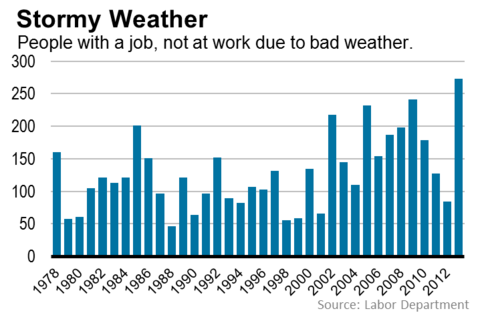 Unfortunately, there are two problems with this thinking. First, the 273,000 are counted as employed whether or not they had to miss work because of weather. It’s treated in the jobs number the same way as an employee taking a sick day or a vacation day.

The problem with the report

I’m not convinced that weather alone was the cause of the bad jobs report.

When you look at the industries that had a net loss of jobs in December, you do indeed see construction workers—which would be expected if you blame it on the weather. However, you also see job losses in the fields of computer and electronic products, motion picture, accounting and bookkeeping services, and health care. I don't associate these jobs tied to weather. [iii]

It's still too early to tell if there is a blemish developing in the economy or it's the same old "slow growth" we are accustomed to in the last 5 years. One thing is certain, which is that the headline unemployment rate is now rendered useless. Friday's labor report showed the unemployment rate dropping to 6.7%, just 0.2% above when the Fed said in the past that they would raise rates. We all know that's not likely to happen. The sole reason the unemployment rate dropped is associated with Americans dropping out of the job market. [iv] 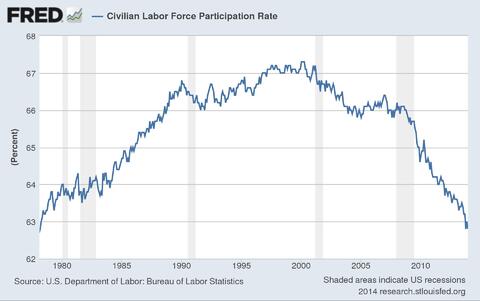 We are now at the lowest point in American workforce participation in almost four decades.

While we will get a better picture of the jobs situation next month when weather isn't to blame the bad weather will likely persist when it comes to our workforce participation.

We continue to hold lower duration bonds, fundamentally strong equities, and a tilt toward non-US developed and emerging economies.