A Chink in the Armor

Amidst all the euphoria of a record stock market and plethora of earnings reports, it's easy to lose sight of how weak and cautious the consumer really is. We have written in the past about the lack of wage growth in middle income families.

What's new this week is that we are seeing signs of the consumer beginning to perhaps pull in the reins on spending. Consumer credit increased by only $8 billion in the month of March, compared to an $18.6 billion increase in the prior month.[1] 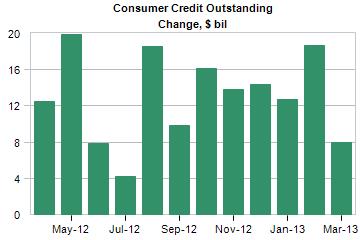 Moody’s reported that consumers reduced the use of revolving credit (credit cards) by $1.7 billion.[2] Credit cards, as we all know, have much higher interest rates than other sources of financing.

What's particularly astonishing is that 97% of the total increase in consumer credit over the last 12 months has come from non-revolving items. Much of this is being spent on automobiles and student loans.[3] You can see from the chart below by Quartz, student loan growth looks very similar to the recent run up in the stock market. 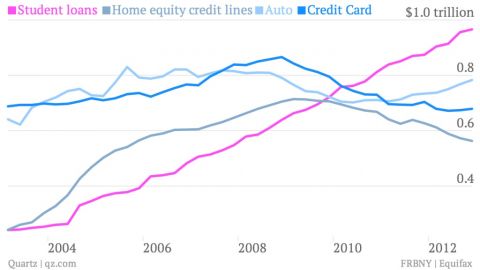 From the perspective of someone who sits on the board of a major US university, the trickle-down effect of money spent on a college education has a significant lag effect on our economy. There is no question in the long-run a college degree leads to higher earnings and higher spending (while that notion is certainly debatable in our current economy).

Unfortunately for our current economy, the money consumers are borrowing at low interest rates is being locked into the educational establishment, and that is a very narrow aspect of our economy. Spending on higher education was only about half of one percent of GDP in 2010.[4] 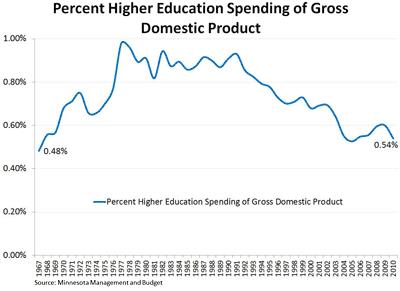 When consumers spend on things like cars, the flow of capital into our economy is much quicker and much more impactful. A study by the Center for Automotive Research showed that automobiles represent about 3-3.5% of overall GDP.[5]

Consumers are less likely to tap into sources of credit with high interest rates because of increases in taxes and no growth in wages. They are, however, willing to load up on low interest rate financing activities—especially on education. While the long-term benefits will be tremendous, the short term payoffs are limited.

With limited immediate benefits from educational spending on our overall economy, revolving credit becomes even more important. Clearly, the data suggests there is a chink in the consumer’s armor.

[5] “Contribution of the Automotive Industry to the Economies of all Fifty State and the United States”, Center for Automotive Research