After the Fall: The Rocky Road Upward 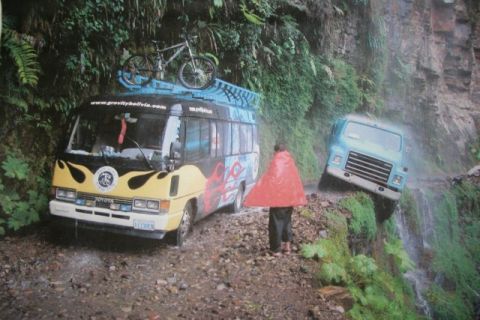 It's great to see equity markets at all-time highs. It doesn't feel that long ago when we were working with clients to not jump off the cliff and give up on their equity strategy. It feels good for markets to prove to us that they can and do revert to their mean, and in this case move from a crash low PE on the S&P 500 of 10.21 on March 6, 2009 (the market bottom), to where it stands now at 15.33—closer to long-term averages (source: Bloomberg).

So, what happens now becomes the paramount question. When you look at the data from Rogoff and Reinhart in their seminal study of financial crises, you can see the economy is working its way through much of the traditional trouble. Below are measures from their report, which we have updated to current figures: 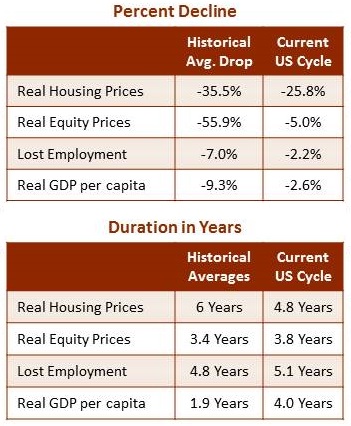 The data shows major progress, more or less consistent with the time it takes to recover from past financial crises.

One item that is getting tremendous amount of attention is housing, as it has a major impact on our overall economy by creating jobs and increasing household wealth. Total residential construction spending is on the rise, as you can see from the chart below. 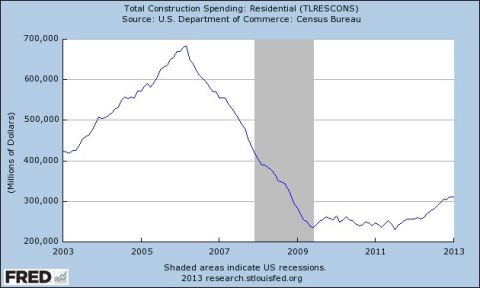 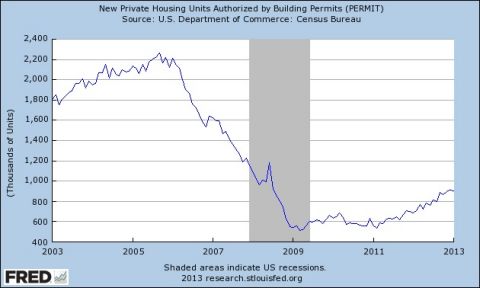 From this chart, you can see we have added $74.8 billion in residential construction spending since spending bottomed in June 2009. You can also see improvements in private housing building permits.

All of this improvement in housing has improved our personal balance sheets. The chart below shows our balance sheets are $1.98 trillion better from housing alone, from its bottom in 2009 to the most recent quarter. 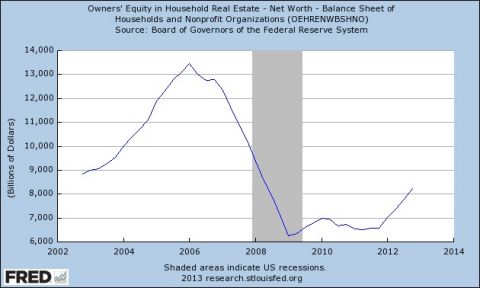 If you look at overall Net Worth things look even better, as it is reaching pre-recessionary highs. 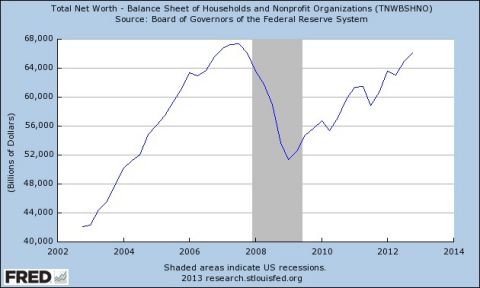 All of this shows a picture that bodes well for jobs and the economy over the long run.

If we show you the same chart on total net worth on a percent change from a year ago, you would get a more cautious picture. 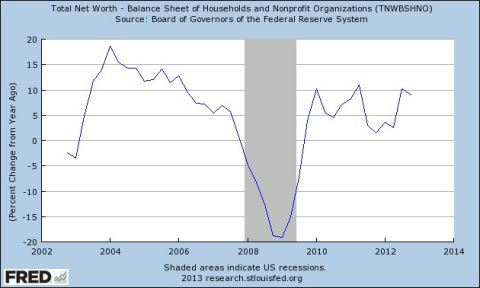 You can see that growth in total net worth has been stalling from the prior year. Add to this view the fiscal cuts that are well detailed by Mark Zandi at Moody's:

"Sequestration adds to the already-considerable fiscal drag on the economy, which will reach full force this spring and summer. The fiscal cliff deal that resulted in the American Taxpayer Relief Act, reached at the start of the year, raised taxes by almost $200 billion for calendar 2013, and will cut 0.8 percentage points from 2013 real GDP growth. Other congressional spending decisions, including the caps agreed to in the 2011 debt-ceiling agreement and appropriations for reconstruction after Hurricane Sandy, net a further 0.2 percentage point cut in real GDP this year. All told, federal fiscal policy will reduce real GDP in 2013 by almost 1.5 percentage points".

While we are working our way through the long and arduous process of recovery from a typical financial crisis (I emphasize financial as they are the worst type), we might have a hiccup or two along the way.

By no means do I suggest trying to time the market. I have never seen the individual investor consistently do it profitably in my 27 years of investing. 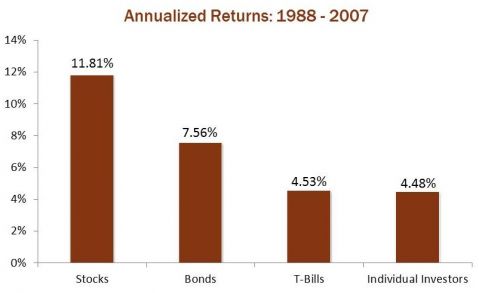 I want to relate this to a personal experience. While traveling through the Himalayas of India last year in search of a rare fish, I was confronted with a terrifying series of rocky roads upward. This economy and market feel about the same. While upward is indeed the destination it will likely be very rocky going forward.