Courage, Confidence, and the Housing Market

In The Wizard of Oz, the Cowardly Lion needed courage to overcome his fears and build some confidence. Based on recent data, the players in the housing market may be in need of some courage, as there appears to be plenty of signs of doubt with respect to the economic recovery, leading Goldman Sachs to cut its forecasts for U.S. housing and GDP growth.[i]

In her recent prepared remarks to Congress, Fed Chair Janet Yellen noted that the recent recovery in housing had flattened out and requires “close observation.”[ii] She also alluded to concerns about the effectiveness of the Fed’s low interest rate policy to stimulate the economy. The Fed doesn’t hold all of the cards when it comes to the recovery. Let’s look at some other players in this market.

Previous blogs have highlighted the high underemployment rate and low wage growth. These trends have impacted household formation, which has leveled off the past two years.[iii]

Among employed 25-to-34 year olds, 25% reported living with their parents even though they had full-time jobs in 2013 versus 22% in 2007.[iv] A similar Gallup survey (24-to-34 year olds) illustrated the relationship between living arrangement and employment status. Those living with parents had a higher underemployment rate, with 50% not fully employed.[v] Concerningly, 50% had full-time jobs, so wages are a factor as well. 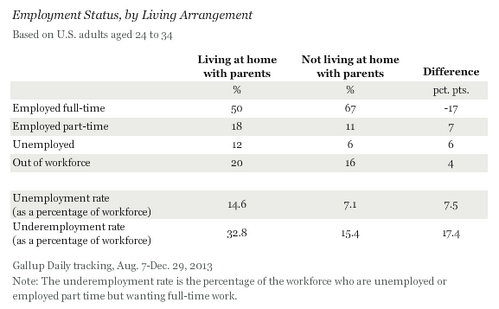 Until the economy reaches fuller employment and younger Americans feel more confident about job security and wages, purchasing a home may be challenging. 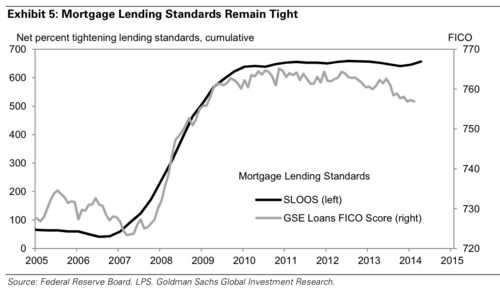 New homebuyers may not qualify for loans and will need to save up for a down payment. While tighter standards help avoid practices that led to the financial crisis, overly strict standards can limit demand, which brings us to the homebuilders.

In May, homebuilder confidence fell to its lowest level in a year, and investment in single-family residential property relative to GDP remains at historically low levels (blue line in the graph).[vii,viii] 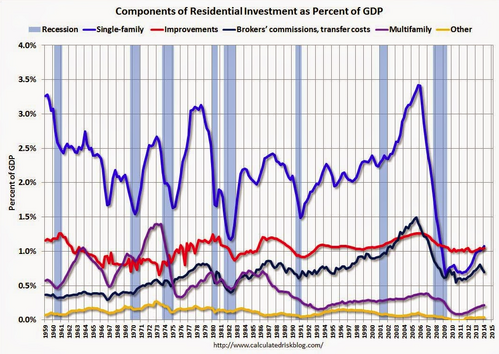 Historically, single-family home investment contributed around 2.25% of GDP, but since 2009, the contribution has been closer to 1%.

With less single-family home construction, supply is down and home prices have increased 22.5% since January 2012, making homes less affordable.[ix] 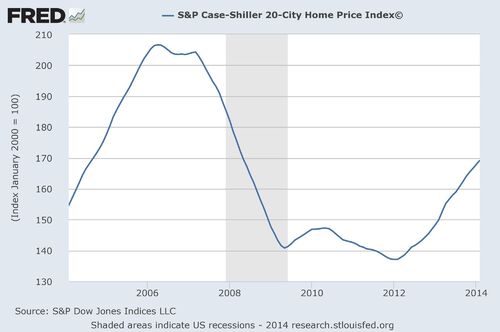 The economic impacts are considerable:

We seem to be caught in a cycle, where the lack of confidence leads to behaviors that will not help the housing market to grow at a higher rate. In October 2011, former Treasury Secretary Lawrence Summers wrote:[xiii]

All eyes will be on the Q2 home building figures. A second quarter of contraction suggests a housing recession, while growth could indicate increasing strength in the economy. If there is a decline or low growth, the housing market will be looking for one or more of its participants to find the courage to take actions that break the cycle, increase confidence, and bring about stronger growth.

[iii] Number of Households: US (estimate, in thousands). Economagic.com