This week the Federal Reserve took another step in encouraging risk taking by shifting their communication policy. They effectively went to a rules-based approach to managing interest rates. In short they said as long as unemployment was above 6.5% and inflation was below 2.5%, we could expect near zero interest rates:

“…The Committee decided to keep the target range for the federal funds rate at 0 to 1/4 percent and currently anticipates that this exceptionally low range for the federal funds rate will be appropriate at least as long as the unemployment rate remains above 6-1/2 percent, inflation between one and two years ahead is projected to be no more than a half percentage point above the Committee’s 2 percent longer-run goal, and longer-term inflation expectations continue to be well anchored.”

Couple this with their prior statement in September when they committed to keeping rates very low until 2015, and it's easy to conclude we are in for a slow growth economy.

Fortunately, we can now almost build a matrix or grid to calibrate interest rate expectations. While the Fed gave themselves plenty of room to maneuver in their statements by suggesting other factors would be taken into consideration, it's quite clear we now have some specific rules of thumb to rely upon.

For example, if we added 150,000 jobs per month and keep the labor force participation at 63.6% of the population it would take roughly 3 ¼ years around 2016 to get us to the 6.5%. In fact, I have included a link from the Federal Reserve Bank of Atlanta that will let you run your own scenarios.

What happens if we change the participation rate? After all, when the economy heats up more people will likely jump back into the labor market. Take the 150,000 jobs per month and simply increase the participation rate to 65% and we are talking about 9 years to see interest rates rise and unemployment drop below 6.5%.

Behaviorally, you might think it's time to run for the exit on your equity investments—but once again, the counter-intuitive point might be better with finance. Historically, according to Goldman Sachs, there is little correlation between GDP growth and equity returns, Also, interestingly enough, the Goldman study suggests that the relationship between equity returns and GDP growth actually shows better returns during slower GDP growth. Here is a chart below from their study: 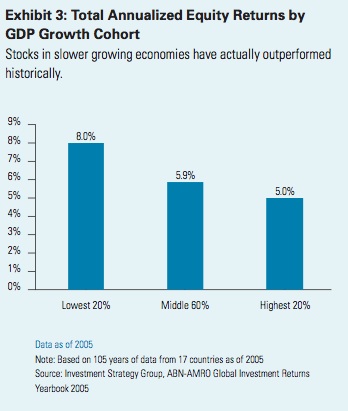 Further, when you look historically at different inflation and interest rate environments, we can see that with low and rising inflation, all asset classes showed positive returns, according to JP Morgan’s chart below: 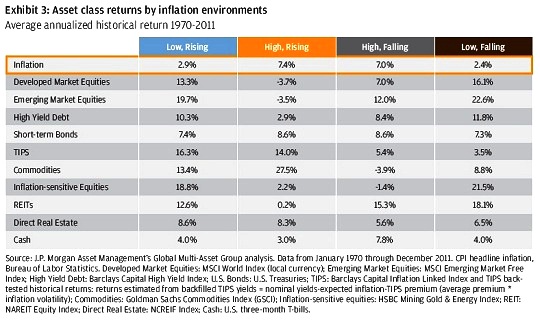 While the Fed through their actions signaled we are actually well over the GDP Growth Cliff, it certainly does not suggest we should sell and hide. Quite to the contrary, it might just suggest that we don't look down.

All of this seems trivial in the face of such a horrific event in the Sandy Hook village of Newtown, Connecticut. Every one of us at Phillips & Company extend our deepest sympathy and heartfelt thoughts and prayers to all those suffering and grieving, especially our clients and colleagues in Connecticut.